The 2,286th Meeting of the Society

Why does the universe accelerate? When did the first stars, galaxies, and black holes form? Are there Earth-like planets? The vision for astronomy and astrophysics research and the astronomical enterprise in the coming decade is presented in this review of the National Academies Astro2010 Decadal Survey Committee’s “New Worlds, New Horizons” report. The recommendations, two years in the making, represent a community consensus formed from the input of over a thousand astronomers. Driven by the most exciting and pressing astronomy questions today, the recommendations lay the groundwork for future observations, technologies, and theories. Top-ranked large projects Large Synoptic Survey Telescope (LSST) and Wide-Field Infrared Survey Telescope (WFIRST), along with an enhanced Explorer program and mid-scale projects such as the Cornell Caltech Atacama Telescope (CCAT), are some of the compelling activities that will carry us forward on transformational adventures. The time domain window of discovery will be opened by rapid repeated sky scans. The fundamental physics of dark energy and dark matter will be probed by mapping billions of galaxies and by studying supernovae. Observations will reveal the growth of structure in the cosmic dawn, and will detail the evolution from protogalaxies to evolved galaxies, and from protoplanets to exoplanets. 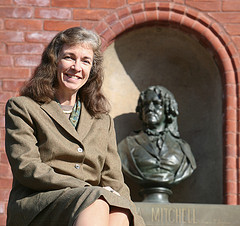 DEBRA MELOY ELMEGREEN is the Maria Mitchell Professor of Astronomy and Department Chair at Vassar College, and President of the American Astronomical Society. She is the first small liberal arts college president in the Society’s 112-year history. Debra was a Top 10 Westinghouse Science Talent Search winner in 1971 with a project on Jupiter’s decametric radiation. She received her A.B. cum laude from Princeton University in 1975 as the first female undergraduate to major in astrophysical sciences. Her Ph.D. is from Harvard University in 1979, where she was a Zonta International Amelia Earhart Fellow. She was the first female Carnegie Postdoctoral Fellow at what is now called the Observatories of the Carnegie Institution in Pasadena, and was a visiting scientist at IBM T. J. Watson Research Center before joining the Vassar faculty in 1985. Debra’s research focuses on the structure of galaxies near and far. Her early research on flocculent and grand design spiral galaxies led more recently to Hubble and Spitzer Space Telescope observations of spirals, interacting galaxies, and clumpy structure in high redshift galaxies. She has over 200 research publications and an undergraduate textbook on galaxies. Debra is engaged in national astronomy service as a member of the National Academies’ Astro2010 Decadal Survey, the NRC Board of Physics and Astronomy, the Astronomy and Astrophysics Advisory Committee for NASA, NSF, and DOE, and the US National Committee of the International Astronomical Union. She resides in New York with her husband, also an astronomer, and has two grown children (an oceanographer and a playwright!).