The 2,197th Meeting of the Society

Beyond The Edge of the Sea

Volcanoes and life in the deep ocean

College of William and Mary

When Rachel Carson wrote of marine life in The Edge of the Sea, life beyond the edge was nearly unfathomable. William Beebe had dived to shallow depths in the Bathysphere to view what he called the “Society of Wonders” in the 1930’s, but exploration of the deep ocean, far beyond the edge of the sea, was a frontier of science in the mid 1900s. While our deep-sea explorations can never rival the political and societal import of the discoveries made during the great era of ocean exploration led by Portuguese navigators in the 15th century, they are revealing much about how the Earth works and about the extreme conditions where life may be found. Even now the deep sea remains a vast, unexplored wilderness. But unlike 50 years ago, we have access to this deep frontier. Technologies for studying ecosystems beyond the edge of the sea are rapidly developing: we can design sophisticated experiments, gather terabytes of observatory information, and undertake programs that once seemed the provenance of outer space. As testimony to the future of ocean exploration and a commitment to improving our access to the abyss, the United States is once again engaged in the construction of a new, state-of-the-art deep-sea research submersible. Deep-Diving Research Submersible Alvin The existing American deep-diving research vessel, Alvin, is now veteran of more than 4000 dives, and is of a vintage that goes back to the era of the spaceship Friendship VII. Alvin has ferried generations of scientists to and from the abyss and is responsible for a record number of scientific discoveries in the deep sea. Of these, none so far surpasses the discovery of the active deep-sea volcanoes – the mid-ocean ridges – that girdle the globe, and their concomitant hydrothermal systems. Giant tubeworms are the textbook hydrothermal vent animals of the Pacific Ocean, truly awesome in their match of anatomy and physiology to their extreme environment. Giant Tube Worm In the Atlantic, it is the vent shrimp that are most compelling. With novel eyes, they lead us to look more closely at the world as they might see, revealing to us a dim, geothermal source of light in the deep ocean that may guide their navigation. We have learned that vent faunas are different in different ocean basins and that we can expect to find undescribed species with as yet unimagined adaptations as we continue our explorations. These organisms will lead us to new therapeutic and other wise useful biological agents as bioprospecting of marine (genetic) resources in the deep sea advances. There are immense stretches of mid-ocean ridge and hundreds of islands of hydrothermal activity that lie in unexplored oceans. We are poised on the brink of discovery and knowledge, beyond the edge of the sea. 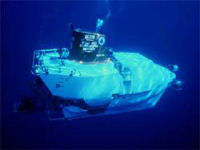 CINDY LEE VAN DOVER is a deep-sea biologist with an interest in the ecology of chemosynthetic ecosystems. She began her work in this field in 1982, joining the first biological expedition to hydrothermal vents on the East Pacific Rise. Earning a Master’s degree in ecology from UCLA in 1985, she continued her graduate education in the MIT/Woods Hole Oceanographic Institution Joint Program in Biological Oceanography. There she joined numerous expeditions and published on diverse topics such as reproductive strategies and recruitment of vent invertebrates, vent food webs, and taxonomic descriptions of new species. In 1989 she described a novel photoreceptor in a vent invertebrate, which in turn led to discovery and characterization of a geothermal source of light at vents and investigations of its biological significance. On receiving her Ph.D. in 1989, Van Dover joined the group that operates the deep-diving submersible Alvin. She qualified as pilot in 1990 and was pilot-in command of 48 dives. Her work with Alvin has taken her to nearly all of the known vent fields in the Atlantic and Pacific, as well as to deep-water sea mounts, seeps and other significant seafloor features. Van Dover has published more than 70 articles in peer-reviewed journals and is an active participant and frequent chief scientist in NSF- and NOAA-sponsored field programs to hydrothermal vents. Her current research focuses primarily on the study of biodiversity and biogeography of vent faunas and invertebrate functional anatomy. In addition to research, Van Dover has authored a popular book for the lay audience about the deep sea and her experiences as an Alvin pilot (Deep-Ocean Journeys; Addison-Wesley, 1997, a.k.a. The Octopus’s Garden). She is also the author of the first textbook on hydrothermal vents (The Ecology of Deep-Sea Hydrothermal Vents; Princeton University Press, 2000). Van Dover was a recent Fulbright Scholar in France and is an Associate Professor in the Biology Department at The College of William & Mary.

Mr. Hershey then introduced the speaker of the evening, Ms. Cindy Van Dover of the College of William and Mary. Ms. Van Dover spoke on “Beyond the Edge of the Sea: Volcanoes and Life in the Deep Ocean.

“I want to tell you,” she began, “what it's like to be on the sea floor.” Until recently we knew almost nothing of the sea's deep parts. There were some remarkable speculations about it, notably Jules Verne's work in the late 19th century, which predicted unknown species down there.

William Beebe was diving in the “Bathyscaphe” in the1930's. He was able to go down a half mile. He was the first to observe the colors. The lower frequencies of the color spectrum are lost first, leaving everything at about 600 feet a cool, eerie blue. At around 1000 feet, “the last hint of blue tapers into an endless black.”

She talked about Alvin and Lulu, Alvin being the deep diving ship built in 1964, and Lulu was her mother ship. Alvin has done amazing things, including finding the hydrothermal vents in the Pacific

Alvin once sank. She was being loaded with people when the elevator failed. After 11 months on the bottom, they fished her out. Surprisingly, their lunch was still whole, it had not decayed.

This led to curiosity about effects of pressure on biological activity. Van Dover did some investigation. It seemed more likely that the brine pickled it, but uncertain results left her wondering if the preservation works only for Wonder Bread and bologna.

Alvin is getting old. She now works off a boat called Atlantis. She works year round, but right now she is being overhauled.

Alvin's replacement will have more viewports; Van Dover is looking forward to that. The replacement is being built with NSF funding and Woods Hole is supervising the construction. Alvin will have a robot named Jason II. The new boat will have much better data and sound communication with the surface. They are also building autonomous underwater vehicles that will go under ice.

The sea floor moves. There are actual cracks in it where it's moving apart. There are five places on the sea floor, mid-ocean ridges. The largest is the mid-Atlantic ridge that parallels the coast of Africa-Europe and the Americas.

At these ridges, they find “black smokers,” plumes of rising hot water. This happens when water goes down cracks, hits lava, is laced with copper, iron, and zinc and is heated and rises through another vent. Black smokers are all far below the natural light level.

They find bacteria on the sea floor. Plants and tubeworms feed on bacteria. Tubeworms have no mouth, anus, nothing. The red that covers them is a unique form of hemoglobin. They have a special organ for digesting bacteria called a tropism. They also have a demand for carbon dioxide. They need it to feed their bacteria.

Van Dover discussed the shrimp that swarm all over the areas near the vents in the Atlantic. They are a slimy gray except for a red-orange patch on the back. The patches are located where eyes would be, have a film over them, and are connected to the brain. Her thesis work attempted to prove the spots were eyes. She did find rhodopsin in the spots and the morphology is consistent with eyes.

Then there was the question: why would they have eyes? Possibly to look at the heat at the vents. They found that the vents do, indeed, glow at a very low level and in a very low frequency, near infrared. She now guesses that the eyes are to keep the shrimp away from the heat, which in places rises from 2°C to 250°C over a distance of one millimeter.

She has also researched whether there is enough light near the vents for geothermal photosynthesis. They did find photons at the vents at a minimally necessary density, so maybe there could be photosynthesis organisms down there. They could not grow fast, of course.

She showed pictures of a thing called a scaly-footed snail. It is the only snail with scales on the pseudopod. It had never been seen before and is seen nowhere except at the black smokers.

They came across a disease called fungal epizootic in Fiji Basin mussels in a bed at a hydrothermal vent. When they opened these mussels, they found brown spots on their tissue and, in a more advanced stage; the whole body of the mussel was black. It smelled of phenolic, which they think is an immune response. These mussels also were riddled with yeast. They are trying to study them, but she thinks these mussels are all going to die by next summer.

She confessed that, in studying the disease, they may have accidentally transmitted it from one area to another. Incidentally, the Alvin has a ballast water system, and those systems are a notorious mode of accidental transfer of organisms.

“All that,” she concluded, “barely scratches the surface, so to speak, of the bottom of the ocean.”

Afterward, she was asked about CO2 sequestering by these organisms. She does not know if it happens or not. She and her colleagues do culture the bacteria, but she noted that the ones they produce are the ones that like to live in the laboratory.

There were also discussions of the technical aspects of the rhodopsin and the wavelength of the chlorophyll in the vent organisms.

Asked why the organisms do not explode when brought up, she said they have no gasses in them, or so little gas it can pass out on the way up. There are also no walls to contain gasses.

To how the tubeworms make a living, she said they think bacteria go through the body wall into worm cells called bacteriocytes.

Mr. Hershey presented Ms. Dover a plaque commemorating the occasion and welcomed her to membership in the Society.

Mr. William Spargo introduced the slate of officer candidates for 2006.

Mr. Hershey announced the next lecture and invited guests to join the Society. Finally, he made the parking announcement, invited everyone to enjoy the social hour, and, at 9:50 pm, adjourned the 2,197th meeting.