The 2,358th Meeting of the Society

Chance vs. Necessity in Mineral Evolution

A New Approach to an Ancient Subject

Earth’s mineral kingdom displays many characteristics of an evolving system, including diversification (the number of mineral species increases with time), complexification (the crystal structures of minerals become more complex), congruency (each stage of mineral evolution follows from prior stages), periods of evolutionary punctuation and of stasis, extinction (the rate of mineral evolution varies), and the fascinating interplay of chance and necessity. Recent research exploits large databases of mineral types and localities coupled with statistical methods employed by ecologists to document diversity-distribution relations for minerals. Surprising conclusions are emerging from these new investigations of “mineral ecology”: more than half of Earth’s ~5000 mineral species are rare; their distribution conforms to a “Large Number of Rare Events” (LNRE) model that mimics the distribution of words in a book. Applying a LNRE model to the analysis of minerals leads to the prediction that there are ~1500 “missing” minerals on Earth–minerals that must exist but have yet to be discovered. Further analysis predicts what some of those minerals might be and where we might find them. A key finding of these investigations, moreover, is that chance and necessity both play roles in Earth’s evolving near-surface environment. Were we to visit another “Earth-like” planet and discover thousands of mineral species, it is probable that at least 25% of those minerals—more than 1000 species—would differ from the species known on Earth today. 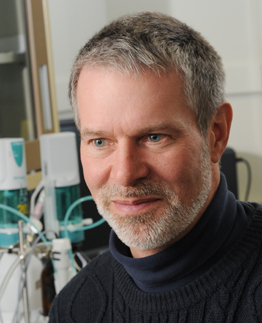 Robert M. Hazen is Senior Staff Scientist at the Carnegie Institution’s Geophysical Laboratory and Clarence Robinson Professor of Earth Science at George Mason University. He is also Executive Director of the Deep Carbon Observatory, a 10-year project to study the chemical and biological roles of carbon in Earth’s interior. Bob’s recent research focuses on the role of minerals in the origin of life, the co-evolution of the geosphere and the biosphere, and the development of complex systems. Bob is an author on more than 400 scientific articles and 25 books, including Genesis: The Scientific Quest for Life’s Origin and The Story of Earth. He is a former President of the Mineralogical Society of America. And he is active in presenting science to nonscientists through writing, radio, TV, public lectures, and video courses. Bob earned a BS and an SM in Geology at MIT and a PhD at Harvard University in Earth Science. And he is also retired from a 40-year career as a professional symphonic trumpeter.

President Larry Millstein called the 2358th meeting of the Society to order at 8:06 p.m. He announced the order of business and welcomed new members. The minutes of the previous meeting were read and approved. President Millstein then introduced the speaker for the evening, Robert Hazen, Staff Scientist at the Carnegie Institution for Science and Professor of Earth Sciences at George Mason University. His lecture was entitled, “Chance versus Necessity in Mineral Evolution: A New Approach to an Ancient Subject.”

Dr. Hazen began by asking the question: “Are we alone in the universe?” For an earth scientist, this means, “Is the Earth unique?” And to answer that question, we must examine the process of Earth formation.

Minerals, like living things, undergo evolution from simpler forms to more complex forms. The first minerals that formed after the Big Bang were nano- and microscopic crystals of diamond and graphite, and a small number of other simple minerals formed from ten basic elements. As planets formed, the action of physical processes such as melting and cooling, created more types (or “species”) of minerals. On dry planets and moons, such as Earth’s Moon and Mercury, we see approximately 300 mineral species. On planets with water, we see more than 400 mineral species, including hydroxides and clays. (This may be the end stage for planets like Mars.) Other conditions, such as abundant seas, sedimentation, geologic activity, and plate tectonics, create more opportunities for the development of additional mineral species, up to about 1500 of them. But to achieve the mineral richness of the Earth today, which has approximately 5000 mineral species, one additional ingredient is required: life.

Minerals on Earth have co-evolved with life. Early life used simple mineral structures as a template. The oxygenation of the atmosphere through biological activity enabled more complex minerals to form, as approximately two thirds of all known mineral species form only in an oxygen environment. These minerals are a direct consequence of biological activity.

Referencing the work of Jaques Monod, a Nobel Laureate and subject of a previous Society lecture, Dr. Hazen asked to what extent mineral evolution on Earth was a result of “Chance versus Necessity.” In other words, if we were able to replay Earth’s history, would it necessarily result in a similar mineral distribution?

From this theoretical prediction, Dr. Hazen proposed that chemical reactions that are extremely difficult under laboratory conditions could nonetheless be virtually certain on a global scale over geological time scales. This does not mean that the development of mineral diversity is deterministic; instead, it means that the mineralogical composition of the Earth and other planets exists on a continuum between a few mineral species that are likely to occur frequently and a much wider variety whose appearance is much less certain.

Dr. Hazen concluded by stating that, although he cannot say for sure that there is other life in the universe, as a scientist of the origin of life, his life’s work implicitly supposes a “cosmic imperative” toward such life. He noted that understanding the mineral realm provides a key to understanding the biological realm and, ultimately, may help to answer this question.

One questioner asked whether plate tectonics is considered a certainty or a chance occurrence in planetary dynamics. Dr. Hazen replied that many planets will have vertical tectonics, associated with a molten core, surrounded by a solid mantle, with molten material rising to the surface. Lateral tectonics, such as found on Earth, is characterized by crust formation and the sinking of cooled material back to the core. This trait is extremely important in providing the chemical energy needed for life. An “earthlike” planet, would likely require lateral tectonics to support the development of complex life.

Another questioner asked about the difference between rarity as it is understood in the gemstone market versus rarity as understood in the Earth sciences. Dr. Hazen explained that his research has identified many mineral species so rare that only one single microscopic grain is known to exist. Thus, if you want to give a loved one a truly rare gem, you should consider forgoing diamonds, which are ubiquitous, and consider giving instead Sardinian ichnusaite, which is exceedingly rarer.