The 2,356th Meeting of the Society

At the beginning of the 20th century Einstein changed the way we think about Time. Near the end of the 20th century scientists learned how to use laser light to cool a gas of atoms to temperatures millions of times lower than anything else in the universe. Now, in the 21st century, Einstein’s thinking, ultracold atoms, and new uses of light are shaping one of the key scientific and technological wonders of contemporary life: atomic clocks, the best timekeepers ever made. Such super-accurate clocks are essential to industry, commerce, and science: they are the heart of the Global Positioning System (GPS), which guides cars, airplanes, and hikers to their destinations. Today, atoms with temperatures near absolute zero, held by lasers, and ticking at the frequency of light, keep time to within a second in the age of the universe, about 1 second in 435,000,000,000,000,000. This lecture will be a lively, multimedia presentation, including experimental demonstrations and down-to-earth explanations, of some of the science of laser trapping, ultra-cold atoms, fantastically accurate time keeping and other aspects of today’s most exciting developments in the science of light and quanta. 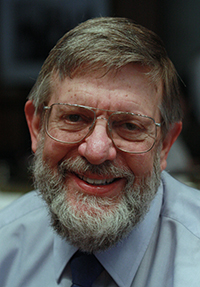 William D. Phillips leads the Laser Cooling and Trapping Group in the Quantum Measurement Division of the Physical Measurement Laboratory at National Institute of Standards and Technology. He is also Distinguished University Professor at the University of Maryland, a Fellow of the Joint Quantum Institute of NIST and the University of Maryland. and co-director of JQI’s Physics Frontier Center. Bill did doctoral work at MIT on the magnetic moment of the proton in water. He then went on develop methods to trap and cool atoms, and to study them at “rest”‘ first as a Chaim Weizmann Postdoctoral Fellow at MIT and then at NIST. He is particularly recognized for developing the Zeeman slower, in which a laser beam and a magnetic field are configured to greatly slow – and slow – a stream of atoms. He made many other fundamental contributions to cooling atoms to temperatures so near absolute zero they are a colder than the coldest things in the universe. He was awarded the Nobel Prize in Physics in 1997 for his work on cooling and trapping, together with Claude Cohen-Tannoudji and Steven Chu. The development of these techniques has been especially fertile for the study of fundamental physical phenomena, leading, for instance, to the Nobel-Prize winning laboratory formation of Bose-Einstein condensates by Eric Cornell and Carl Wieman and, independently, by Wolfgang Ketterle And it has allowed the development of fantastically accurate clocks, themselves a highly valuable tool for physicists and of great importance to modern technology. Bill is well known for his theatrical, informative and involving science lectures. He is a native Pennsylvanian, born in Wilkes-Barre PA, and educated in the public schools there. And he earned a BS in Physics from Juniata College and a PhD

President Larry Millstein called the 2356th meeting of the Society to order at the Cosmos Club in Washington, D.C. on January 8, 2016 at 8:06 p.m. He announced the order of business and welcomed new members. The minutes of the previous meeting were read and approved. President Millstein then introduced the speaker for the evening, William D. Phillips, 1997 Nobel Laureate in Physics, Leader of the Laser Cooling and Trapping Group at the National Institute of Standards and Technology, and Distinguished Professor, University of Maryland. His lecture was titled “Einstein, Time, and Light: Another Look at Einstein’s Thinking and the Measurement of Time in the International Year of Light”.

In his theory of special relativity, Einstein related time to light. Asking himself “What is time?”, Einstein’s breakthrough began with the realization that, fundamentally, time is what a clock measures, and a clock is “something that ticks”. He imagined a very unusual clock, formed from a pair of mirrors, with a pulse of light bouncing back and forth between them. If that clock were to move, the bouncing pulse of light would continue moving at the speed of light between the mirrors, but would also move laterally through space, appearing to describe a zig zag pattern to a stationary observer. Because the speed of light must be constant, however, the light pulse necessarily requires more time to complete this longer path, and the clock would appear to tick slower when viewed by a stationary observer. From this necessity, Einstein concluded that time itself must slow down for an object that speeds up.

Highly accurate clocks do not simply mark the passage of time; they can be tools for measuring space, too. For this reason, GPS satellites have atomic clocks on board. By comparing the time signals broadcast from multiple GPS satellites—one for each dimension and a fourth for baseline time—physical location can be determined with pinpoint accuracy.

And what if we want even more accurate clocks, to detect the most minute perturbations of time, space, and gravity? Then we must slow the atoms down. Dr. Phillips explained that the accuracy of an atomic clock is determined in part by the amount of time an individual atom in the clock is available to be probed, in other words, how fast it is moving. And temperature, he further explained, is just a measure of the kinetic energy of the individual atoms.

To demonstrate, he immersed a balloon—filled with hot air—into liquid nitrogen, noting the dramatic reduction in the volume of the gas as the balloon disappeared into the small bucket. He next filled a plastic water bottle with liquid nitrogen and sealed it, placing it gingerly under a trash can. He then inflated a second, and a third, and a fourth, and a fifth balloon and added each to the bucket in turn. He acknowledged the obvious observation that the volume of the inflated balloons far exceeded the volume of the bucket, with each balloon compressing as the gas inside was supercooled by the liquid nitrogen.

He explained that the process also works in reverse, with supercooled substances expanding when they are exposed to the comparatively “boiling hot” room temperature. This digression was interrupted by an explosion, demonstrating the expansion of the bottled liquid nitrogen.

Dr. Phillips explained that liquid nitrogen is 77K. Cold as it is, it can only get us so far toward absolute zero. For truly accurate clocks, we must cool the atoms without touching them, which brings us back to the international year of light. Light exerts a force on atoms, but only when it is absorbed. Only light of specific frequencies is absorbed by atoms of a given element.

By directing laser beams tuned slightly below the target frequency, from multiple directions, at a cluster of cesium atoms, researchers can take advantage of the Doppler Effect to selectively affect only those atoms moving toward a given laser beam. This creates what Dr. Phillips called “optical molasses”, in which atoms are gradually slowed by nudging them backward regardless of which direction they travel. Refinements to this process achieved temperatures of 700 nK, or 4 million times colder than the cosmic background radiation of outer space.

At this temperature, the cesium atoms are moving 1 cm/sec and can be measured so closely as to produce a clock with an accuracy of one second in 300 million years. Dr. Phillips concluded by noting that the year of light reminds us that the story of time is truly a story of light.

One question was why the speed of light is constant. Dr. Phillips admitted that there was not yet a satisfying answer to this question, other than to say that Einstein’s equations would not work without a constant speed of light.

Another question was about whether time was quantized. Dr. Phillips noted that no current theories require quantized time, but theorized that if it were true, it would likely be the Planck time.
After the question and answer period, President Millstein thanked the speaker, made the usual housekeeping announcements, and invited guests to join the Society. At 9:58 p.m., President Millstein adjourned the 2356th meeting of the Society to the social hour.