The 2,343rd Meeting of the Society 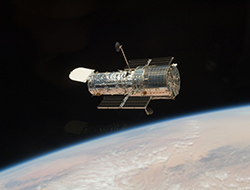 Over the course of the last 25 years the Hubble Space Telescope has opened the eyes of the public to the vast beauty and deep mysteries of the universe, and has transformed the scientific fields of physics and astronomy. These stunning contributions were made possible by a series of complex and daring human spaceflight missions using the NASA Space Shuttle. Indeed, Hubble’s history is peppered by unexpected challenges and heroic, successful efforts to overcome them, from correcting the spherical aberration that was discovered as soon as Hubble opened its eye in space in 1990, to reversing the 2004 cancellation of further servicing missions and carrying out the final repair and upgrade mission in 2009. In this talk, John Grunsfeld, the lead Hubble repairman, will describe these amazing missions using vivid imagery from high definition still and video cameras on the final servicing mission. He will present a story about science, politics, and human drive and creativity. The success of the Hubble has depended on teams of engineers, technicians, scientists, and astronauts working together on high performance challenges for the cause of the exploration of the cosmos. The science and inspiration from these efforts have been extraordinary. 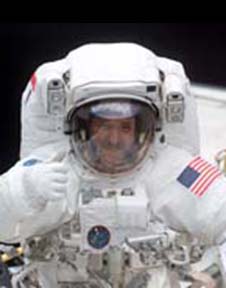 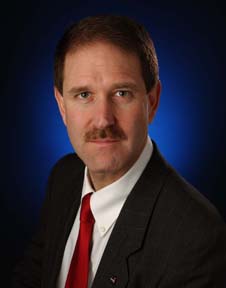 JOHN M. GRUNSFELD is Associate Administrator for the Science Mission Directorate at NASA. Previously he was Deputy Director of the Space Telescope Science Institute in Baltimore and Professor of Physics at Johns Hopkins University. John was an astronaut from 1992 until joining STSI as Deputy Director. Before becoming an astronaut, John was a Senior Research Fellow at CalTech in Physics, Mathematics and Astronomy. John made five space shuttle flights. He visited Hubble three times on those missions, and performed eight spacewalks to service and upgrade the observatory. In all, he logged more than 58 days in space, and 58 hours and 30 minutes of spacewalk time. He made his first shuttle flight on Endeavour in 1995, studying the far ultraviolet spectra of faint astronomical objects using the Astro-2 Observatory. He made his second flight on Atlantis in 1997, docking with the Russian space station Mir. He made his last three missions on Discovery in 1999, Columbia in 2002 and Atlantis in 2009, upgrading and servicing the Hubble Space Telescope on all three missions. He was the Payload Commander and lead spacewalker on the missions in 2002 and 2009. And he served as the commander and the science officer on the backup crew for Expedition 13 to the International Space Station in 2004 and 2005. As Deputy Director at STSI John managed the science program for the Hubble Space Telescope and the forthcoming James Webb Space Telescope. He has done research on high energy astrophysics, cosmic ray physics and exoplanets, focusing especially on future astronomical instrumentation. His doctoral work used a cosmic ray experiment on the space shuttle Challenger. John earned his BS in Physics from MIT and his PhD in Physics from the University of Chicago. He is the recipient of numerous awards, including the NASA Distinguished Service Medal, the NASA Outstanding Leadership Medal, the NASA Exceptional Service Medal, the National Space Club Engineer Award, the Komarov Diploma, and the Korolov Diploma.

President Larry Millstein called th­­e 2343rd meeting of the Society to order on March 6, 2015 at 8:06 p.m. He announced the order of business and thanked the sponsors. He announced with regret the passing of Mary Enig, Past President of the Society, and introduced new members of the Society. The minutes of the previous meeting were read and approved. President Millstein discussed the 18th meeting of the Society on January 13, 1872. He then introduced the evening’s speaker, John Grunsfeld, Astronaut and Associate Administrator for NASA’s Space Science Directorate. His lecture was entitled “Hubble: The Missions that Enabled Hubble to Unravel the Mysteries of the Universe.”

Dr. Grunsfeld began by noting that the Hubble Space Telescope is one of the most powerful scientific instruments ever created by humans. It is a unique observatory whose success depended entirely on human space flight and astronaut electricians, plumbers, and mechanics.

Dr. Grunsfeld said he believes that a drive for discovery is programmed into human DNA. We study Earth and space science to answer questions about the world around us. One of these very important questions is “Are we alone in the universe?” Dr. Grunsfeld noted that the Kepler telescope has discovered thousands of exoplanets, perhaps a clue to answering this question. Another very important question is whether human life is sustainable on Earth. Dr. Grunsfeld noted that life is ultimately not sustainable. In about five billion years the Sun will become a red giant, and in about three billion years the Andromeda Galaxy will collide with the Milky Way with gravitational effects that may knock the Earth out of its orbit. Dr. Grunsfeld asked what are we doing today that will determine what our children’s lives will be like in 10, 50, or 100 years? Knowing and understanding the science about how we are changing the Earth’s atmosphere and oceans gives Dr. Grunsfeld hope, he said.

Ricardo Giacconi, one of the fathers of the Hubble, said that 21st century astronomers should be uniquely positioned to causally relate the elements born in the Big Bang all the way to the formation of life. Hubble has allowed us to make great progress in this endeavor.

Dr. Grunsfeld then began describing the Hubble and its servicing missions. The Hubble, he said, is about the size of a big bus. Its mirror is relatively small, 2.4 meters across. But, since it is outside the atmosphere, it has no atmospheric aberration, it can measure wavelengths that do not penetrate to the surface, and, since it is free of terrestrial vibration, it is very steady. Hubble can see in the visible spectrum, and somewhat into the UV and IR spectra. Looking at very old, far objects requires IR sensitivity, while very hot or energetic objects are observed through UV.

The second Hubble servicing mission, in 1997, carried out repairs and installed new cameras. Dr. Grunsfeld’s first Hubble mission was in 1999. During the planning stage, three of Hubble’s six gyroscopes failed, and the mission became an emergency mission to replace the gyros and to install a new computer and some other equipment. In 2002, NASA put in a new 16 megapixel camera, new solar arrays, fixed some electrical problems, replaced the main fuse box, and re-plumbed the telescope with a new cooling system. Servicing Mission 4 was originally planned for early 2005, but was canceled after the Columbia disaster. Fortunately, thanks to the efforts of Dr. Grunsfeld and others, NASA reconsidered and reinstated a fourth servicing mission.

Dr. Grunsfeld showed videos and still photographs of that mission. He highlighted how the shuttle “chased” the Hubble and then on the third day maneuvered up to it. Then astronaut Megan McArthur, having trained only on simulators (since a zero-g robotic arm is not available on Earth), successfully “grabbed” the Hubble on her first attempt. The next day the astronauts made the first spacewalk – an activity that Dr. Grunsfeld loves. The astronauts were planning to replace the camera, but had significant problems that they eventually overcame partly by brute force. Hubble’s batteries were replaced. The COSTAR instrument was taken out, since all the new instruments had built-in corrective optics. As COSTAR weighs 800 pounds, with attendant inertia, and space suits are hard to move in by themselves, this was a difficult operation.

The astronauts fixed the advanced camera, a very delicate operation involving removing a dozen tiny screws and cutting through aluminum. Dr. Grunsfeld remarked that everything that could go wrong did go wrong. In another spacewalk, astronauts removed 117 screws to replace the Space Telescope Imaging Spectrograph. This operation also met mechanical difficulties but was ultimately completed. On the final spacewalk the fine guidance sensor was installed. The mission covered five million miles, 197 orbits of the Earth, and five spacewalks. It was a complete success.

The Hubble takes black and white pictures, but by using colored filters, these can be combined into a single multispectral image. Dr. Grunsfeld showed some of these beautiful, valuable images: a galaxy of a hundred million stars; and a nebula of gas and dust where new solar systems are forming, taken in the characteristic colors of hydrogen, oxygen, and sulfur. One filter reveals the dust clouds, and another the star being born in the nebula, he said.

Hubble imaged many surprises. The Shoemaker-Levy collision with Jupiter was recorded in great detail. And beyond that, once NASA started looking, scientists realized that Jupiter attracts many such collisions – lucky for the Earth. He showed a picture of the Tycho crater and a younger crater on the moon, noting that with the new imaging equipment, NASA now has enough information to construct 3-D views of such features.

We have come a long way since Galileo and can now look through the entire universe, he said. He showed a deep field image with thousands of galaxies. We now know that there are 200 billion galaxies in the universe.

We are now celebrating the 25th year of Hubble in orbit. Dr. Grunsfeld gives talks to young audiences that he calls the Hubble generation. These are people born after 1990, who have known its iconic images since birth.

What is next? The James Webb Space Telescope is scheduled to launch in 2018. It is 6.5 meters across, gold-coated for better IR sensitivity, and will be cooled to 40ºK. It will be able to see the first stars and will look closer at the new planets that are being discovered.

Dr. Grunsfeld stated his belief that we will eventually be able to assemble and launch a much bigger telescope which could answer the question “Are we alone in the universe?”

After the question and answer period, President Millstein thanked the speaker, made the usual housekeeping announcements, and invited guests to join the Society. At 10:10 p.m., President Millstein adjourned the 2343rd meeting of the Society to the social hour.
Attendance: 97
The weather: Clear
The temperature: -1°C
Respectfully submitted,