The 2,207th Meeting of the Society 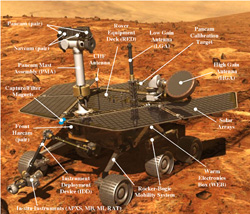 The “Martian frontier” has been dramatically opened thanks to the roving scientific exploits of the Mars Exploration Rovers (MER) “Spirit” and “Opportunity”. Now about 800 days into their ground-based reconnaissance of scientifically-fertile landscapes within the equatorial region of Mars, these intrepid robotic explorers are continuing to rewrite the textbooks on the geology and geomorphology of Mars. Their scientific achievements have far exceeded even the most optimistic of expectations, and their endurance is now up to an order of magnitude of all mission requirements. The MER “twins” as they are sometimes called have discovered convincing evidence that two locations on the Martian surface once harbored liquid water systems, either as persistent acid groundwaters, or in the form of shallow, salty seas or lakes. The minerals detected by Spirit and Opportunity are fingerprints of such water-related chemical and physical processes, and suggest that the role of persistent liquid water in martian geologic history is much larger than many had anticipated. These pathfinding results have focused the attention of NASA’s Mars Exploration Program on how to extend our understanding of whether any of the wet environments discovered by the rovers could ever have been habitable, and if so, whether the records of any biological activities could have been preserved. NASA’s Mars Reconnaissance Orbiter (MRO), now in orbit around the red planet, is poised to address this question by means of its ultra-sensitive orbital mapping tools, some of which are sensitive enough to “see” the rovers and to extend their observations across vast regions of Mars. Together, the MER rovers and MRO will direct NASA’s 2009 Mars Science Laboratory (MSL) to the most scientifically-compelling location on the red planet for conducting in situ analytical observations in search of subtle chemical records of habitability. 360-degree panorama of “Endurance Crater” and the surrounding plains of Meridiani Planum. Image credit: NASA/JPL-Caltech/Cornell Today, Spirit and Opportunity, together with their orbiting partners MRO, Mars Global Surveyor, and Mars Odyssey constitute an unprecedented scientific observing system at Mars ready to astound us all with discoveries that may relate to the workings of our own home planet.

JIM GARVIN is Chief Scientist of NASA’s Goddard Space Flight Center, a 21 year veteran of NASA, and a student of Mars since birth. He has served as a science team member on NASA Mars missions since graduating from Brown University with his Ph.D. in 1984. In addition, he served as the Chief Scientist for the NASA Mars Program as it was restructured in 2000, and as a primary architect of its scientific strategy from 2000 until 2005. He has also served NASA and the science community as the Agency’s Chief Scientist, before this function was abolished in late 2005. He currently serves as a science team member on the Mars Global Surveyor and MSL missions. He was recently selected as a Presidential Rank Award winner for his work developing the scientific strategy for Mars, and he is also a Trustee of Brown University. He enjoys travelling to Mars-like landscapes on Earth, such as those in Iceland. He lives with his wife and two children (Zachary and Danica) in Columbia, MD.