The 2,179th Meeting of the Society

NASA Chief Scientist for Mars and the Moon

Underwritten by Joseph and Vary Coates

Mars has emerged as a planet that beckons thanks to the remarkable discoveries that are continuing from the twin Mars Exploration Rovers Spirit and Opportunity, as well as the spectacular contributions by the Mars Global Surveyor and Odyssey orbiters. That it was once wet in local places, and experienced volcanism adequate to drive geothermal systems that are hotbeds of biological activity (here on Earth), is no longer in question. But where will these discoveries take us we embark upon our next steps in Mars Exploration, ultimately a search for origins, for life beyond Earth, and whether we are “alone”. 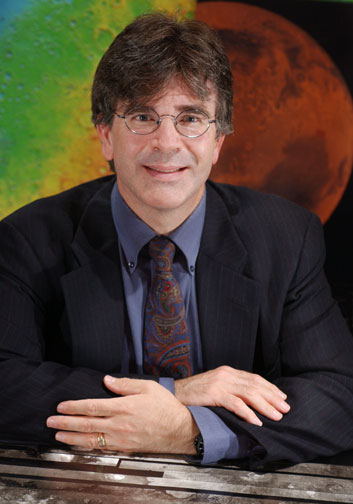 JIM GARVIN received his Ph.D. at Brown University in 1984, with specialization in the geomorphology of lander sites on Mars and Venus and radar remote sensing. He also holds a Sc.B. in computer science from Brown University (1978) magna cum laude, an M.S. in computer science from Stanford University, and a Sc.M. in Geological Sciences from Brown (1981). In his present position as Chief Scientist for NASA’s Mars Exploration Program and the newly initiated lunar exploration initiative, he is responsible for formulation of scientific requirements for the exploration of Mars and the Moon, and overall leadership of the scientific trajectory of the programs. He has served NASA in his present position since 2000. He has published over 60 peer-reviewed research articles and thousands of extended abstracts. In January 2004, he appeared on “The Late Show with David Letterman” as NASA’s Mars expert.