The 2,255th Meeting of the Society

Our Microbial Partners and Their Roles in Health and Disease

Director of the Institute for Genome Sciences
University of Maryland

The microorganisms that live inside and on humans (known as the microbiota) are estimated to outnumber human cells by a factor of ten. Together, the genomes of these microbial symbionts (collectively defined as the microbiome) provide traits that humans did not need to evolve on their own. To understand the range of human genetic and physiological diversity, the microbiome and the factors that influence the distribution and evolution of the constituent microorganisms must be characterized. It is expected that these studies will reveal new insights into the role of host genotype, host physiological status (including the properties of the innate and adaptive immune systems), host lifestyle (including diet), and host environment (at home and/or work) in the modulation of the structure and function of the microbiota in health and disease, and new opportunities for preventive approaches to disease that specifically target the microbiota. 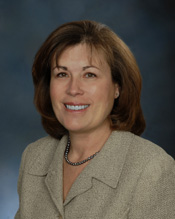 CLAIRE M. FRASER-LIGGETT is Director of the newly created Institute of Genome Sciences and a Professor of Medicine at the University of Maryland School of Medicine in Baltimore, Maryland. She was previously the President and Director of The Institute for Genomic Research in Rockville, Maryland. She has played a role in the sequencing and analysis of human, animal, plant and microbial genomes to better understand the role that genes play in development, evolution, physiology and disease. She led the teams that sequenced the genomes of several microbial organisms, including important human and animal pathogens, and as a consequence helped to initiate the era of comparative genomics. Claire Fraser-Liggett has more than 220 scientific publications. She has served on committees of the National Science Foundation, Department of Energy and National Institutes of Health. She has served on a number of National Research Council committees on counter-bioterrorism, domestic animal genomics, polar biology, and metagenomics. She received her PhD in pharmacology from State University of New York at Buffalo.