The 2,234th Meeting of the Society 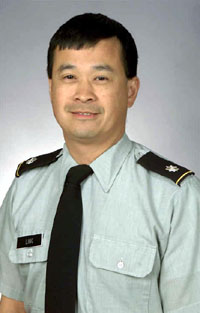 COL GEOFFREY LING, MC, USA is a program manager at the Defense Advanced Projects Agency. At the agency, his focus has been on improving warfighter survival from combat related injury. There his program portfolio included Advanced Prosthesis (neural controlled robotic arm), Preventing Violent Explosion Neurotrauma (elucidating the physical mechanism by which IEDs cause traumatic brain injury and mitigating it), Human Assisted Neural Devices (brain control of assistive devices), Freeze Dried Platelets and others. COL Ling is the only practicing neuro critical care specialist in the U.S. military. In that capacity, he has been deployed to both Operation Enduring Freedom (Afghanistan) and Operation Iraqi Freedom. In Afghanistan, he served with the 452nd Combat Support Hospital and in Iraq, he served with the 86th Combat Support Hospital, “the Baghdad ER,” and the 10th Combat Support Hospital, where he was “the physician of the month” in November, 2005. He is also Professor and Vice-Chair of Neurology at the Uniformed Services University of the Health Sciences (USUHS) in Bethesda, Maryland as well as an attending physician at Walter Reed Army Medical Center and Johns Hopkins Hospital. Dr. Ling earned his undergraduate degree from Washington University, his Ph.D. at Cornell University and his Medical Degree from Georgetown University School of Medicine. Following a medical internship and residency at Walter Reed Army Medical Center, he completed fellowships in Neuroscience Critical Care at Johns Hopkins University in Baltimore, MD and in Neuropharmacology at Memorial Sloan-Kettering Cancer Center in New York. Dr. Ling’s research interests are mainly focused on brain injury – trauma and stroke. His laboratory at USUHS takes a broad approach to injury. Studies are done developing new diagnostic imaging approaches, novel pharmacologic agents and elucidating mechanisms of brain edema formation. He has authored over 50 journal articles and 35 reviews/book chapters, including Cecil’s Textbook of Medicine.

President Kenneth Haapala called the 2,234th meeting to order at 8:15 pm February 22, 2008 in the Powell Auditorium of the Cosmos Club. The minutes of the 2,233rd meeting were read and approved.

Mr. Haapala introduced the speaker of the evening, Mr. Geoffrey Ling, a program manager at the Defense Advanced Research Projects Agency. Mr. Ling is an MD, a PhD, a colonel in the army, a professor at the Uniformed Services University of the Health Sciences, and a very enthusiastic gentleman. He spoke on “Revolutionizing Prostheses: Restoring the Injured Warfighter.” DARPA, Mr. Ling mentioned, is an interesting place. It was founded by Eisenhower during the Sputnik hullaballoo, which shook up the United States. The Russians could look down on the U.S.! How could this have happened?

The answer was: government agencies were not taking risks appropriately, so Eisenhower created a new agency to explore the extremes of the natural and physical worlds so that the USA would never lose its scientific dominance. DARPA’s successes include the internet, once known as ARPANET (Al Gore did not invent the internet), the global positioning system, night optical vision, Gortex (R), titanium, stealth, unmanned aerial vehicles, and metal morphosis. The DARPA design is to do projects with high risk and high payoff. Eighty per cent of their projects are supposed to fail.

In this war, Mr. Ling said, meaning Iraq and Afghanistan, fatalities are few, but there are many wounded. Many are unable to return to a normal productive lifestyle. Of 10,397 casualties to date, 80% involve arms or legs. So far, there are more than 200 American amputees and about 600 functionally impaired.

They are focusing on the arm, where the greater challenge lies. Prosthetic legs are so good, that soldiers with lost legs can go back to active duty if they choose to.

The arm functions only for one thing, to put the hand where it should go. The hand is remarkable, it is the best tool known to man. It has 27 actuators, a toe has only one.

The usual replacement for a hand is still a hook. The “hands” you see are cosmetic prostheses. They are rubber hands. We really want to give back a person’s ability to ride bike or play piano. The usual prostheses are also dead. The user has to look at the hook with eyes to see what it’s doing.

Some time ago, the program began a paradigm shift in prosthetic control from muscle to neural control. Miguel Nicolelis, at Duke University, trained a monkey to play pong with a joy stick. They put an electrophysilogical probe in the monkey’s brain to study the relationships between brain impulses and joy stick movements. Then they programmed the game to respond to the brain impulses, took away the joy stick, and strapped the monkey’s arm to his side, and the monkey could play pong using just his brain impulses. More recently, building on this, a monkey has been able to control a robot arm and feed himself using only brain impulses.

They want to go from a hook or a rubber hand to something that works like an arm. They are not so concerned that it look like an arm. They want to accomplish this in two years. Then they will start tapping into the brain. They want it to have indirect neural control and sensory capability. They want it to have 20 lbs of lift and 8 lbs of grip. They are allowing 4 years to develop the brain controller. He said “everybody” who does brain control is getting DARPA money right now. The arm will need several kinds of sensors. They intend to deliver a usable arm using muscle or peripheral nerve impulses in a year. Right now, test patients are practicing and developing skills with developmental models.

He played a tape that sounded like bacon frying a little too hot. This crackling noise was a brain firing. These are the signals that will be used to control the arm eventually. The video showed a monkey playing piano with a robot arm.

So far, they have a five fingered hand, the wrist is powered, and the shoulder and elbow are powered. A sleeve goes over the skeleton, and he sais it “looks pretty cool.”

The arm has a lot of local control in it. He showed an impressive demonstration of using an arm with local control, using movements of the shoulder used to control hand movements. The men were moving the arms in a fairly natural looking way and even eating. This was with ten hours of training with what he called a “strap-andgo” arm. They have also had some success with taking control signals from nerves in stumps and shoulders. A cooperating patient named Jesse who had lost both arms in an electrical accident was shown stacking and unstacking glasses. He compared the arm to a Segway, where you can’t fall down because of the gyroscopes.

These devices are being engineered for FDA approval. The Veterans Administration has agreed to pay for a 50-patient, 10-center trial, with a goal of FDA approval. He said the project has been running “DARPA-hard, at a DARPA-fast pace.

Concluding, he expressed satisfaction with his project. He finds providing for the most deserving patients – American soldiers at war defending the principles of freedom, self rule, and equality that define the US – the most personally rewarding experience one can have.

In the question period, someone asked, what about everyday life, do these people need someone with them every day? In any case, he said, they will be better off with the deviceit than without it. In most cases they will not need personal attendance all the time.

How many people, worldwide, might benefit from this? Tens to hundreds of thousands. Christopher Reeve could have used it. It could be used to replace an arthritic arm.

Why do you need FDA approval? Because it’s a device. So is a shoe. Yes, and it requires the lowest class of FDA approval, meaning it is minimal risk, like a shoe. It’s below dental implants and way below defibrillators.

In the future, could this technology animate robots? Great question. Could someone invent a killer robot, sit in a room, and run the robot to raise hell? Yes, I suppose, like computers. We did not think someone would use them for pornography, but some idiot does.

Why not design toward function? Yes, we could. Fundamentally, there’s nothing to stop us. We have arbitrarily constrained ourselves to what God gave us.

What level of g-force could the arm take? I don’t know. The mass is 170 grams.

Finally, Mr. Ling spoke in a personal way of his and others satisfaction with his work. He told of seeing a young man who had a broken back. Since the spinal cord was sound, he was expected to recover full function. Mr. Ling told him he was going home. The man cried at the disappointing news. “What am I when I go home?” he asked. “Manager of a McDonalds.” Here, I get to help people build a country of their choice.

After the talk, Mr. Haapala made the always anticipated parking announcement, with vigor and conviction, but still in a dignified way. He made a pitch for support, pointing out the lectures are at no charge, but not at no cost. He encouraged sponsorship and contributions. Bob Hershey offered to help guests interested in membership. Mr. Haapala announced the next meeting. Three new members were introduced. Finally, at 9:42 pm, he adjourned the 2,234th meeting to the social hour.