The 2,387th Meeting of the Society

Revolutionizing Our Understanding of Cellular Diversity and Dynamics 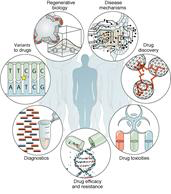 The Human Cell AtlasFor the past 150 years scientists have classified cells by their structures, functions, locations, and, more recently, molecular profiles. The but the characterization of cell types and states, however, has remained surprisingly limited. This limitation has constrained our ability to understand fundamental biology and to translate this understanding to diagnose and treat of disease. Fortunately, an extraordinary opportunity is emerging because of transformative advances in experimental and computational methods.

These advances have led the scientific community to launch the Human Cell Atlas (HCA), an international collaborative consortium that aims to create comprehensive, open reference maps of all human cells—the fundamental units of life—as a basis for both understanding human health and diagnosing, monitoring, and treating disease. We expect that the HCA will have profound impact on every aspect of biology and medicine, propelling translational discoveries and applications and ultimately leading to a new era of precision medicine.

Aviv RegevAviv Regev is a professor of biology at MIT, a Howard Hughes Medical Institute Investigator, Chair of the Faculty and Director of the Klarman Cell Observatory and Cell Circuits Program at the Broad Institute of MIT and Harvard, and she is co-chair of the organizing committee for the international Human Cell Atlas project.

Aviv is a computational and systems biologist. She studies the molecular circuitry that governs the function of mammalian cells in health and disease. She pioneered many leading experimental and computational methods for the reconstruction of circuits , including in single-cell genomics.

Aviv is a recipient of an NIH Director’s Pioneer Award, a Sloan fellowship, the Overton Prize from the International Society for Computational Biology (ISCB), the Earl and Thressa Stadtman Scholar Award from the American Society of Biochemistry and Molecular Biology, and the ISCB Innovator Award, and she is a ISCB Fellow.

President Millstein then introduced the speaker for the evening, Aviv Regev, Professor of Biology at the Massachusetts Institute of Technology, Core Member and Faculty Chari at the Broad Institute, and an Investigator at the Howard Hughes Medical Institute. Her lecture was titled, “The Human Cell Atlas: Revolutionizing Our Understanding of Cellular Diversity and Dynamics.”

For the past 150 years, scientists have classified cells by their structures, functions, locations, and, more recently, molecular profiles. But, the characterization of cell types and states, however, has remained limited. Fortunately, an opportunity is emerging due to advances in experimental and computational methods that are changing our understanding of cell type and state characterization.

Scientists long lacked understanding of how it is that we have one genome which produces so many cell types. But, through technological advances, scientists have learned that different cells select which parts of their DNA are transcribed to RNA, and which strands of RNA are translated into proteins at which level and how stable those proteins will be. This understanding explains the qualitative and quantitative differences between our cells. It also allows us to identify genetic variants that cause different diseases.

Fortunately, technological advances have allowed us to measure individual cell expression. The first major advance was single cell genomics, which allows us to capture an individual cell, capture the RNA of that cell, transcribe it to DNA, and to sequence that DNA. In the last ten years, scientists have gone from sequencing dozens of individual cells at once, to sequencing millions at a time.

The second major advance was spatial genomics, which has allowed scientists to observe things in situ, within individual cells’ tissue. As yet, this technique works on only dozens of cells at a time.

These advances have led the scientific community to launch the Human Cell Atlas (HCA), an international collaborative consortium that aims leverages scale to create a comprehensive reference map of the types and properties of all human cells, as a basis for understanding, diagnosing, monitoring, and treating health and disease.

The comprehensive map that HCA seeks to produce may be described as a “Google Maps” for the human body. In the bounds of its first draft, HCA has identified 30-100 million cells, estimating that it will have identified more than 10 billion unique cells when finished.

Regev expects the HCA will teach us fundamental biology about the taxonomy, histology, developmental biology, and physiology of human cells. Ultimately, Regev believes the HCA will ultimately lead to a new era of precision medicine.

One guest asked why HCA uses open source software instead of free source. Regev clarified that while open source, HCA’s software is under a MIT BSD license, which she said is a good, non-contaminating approach.

Another guest asked how HCA intends to obtain its tissue samples and whether it intends to take samples from the same donors over time. Regev said biopsies are helpful, but too small and too random to develop maps of full organs. Post-mortem and transplant donors, however, allow for full organ sampling.