The 2,296th Meeting of the Society

This lecture will discuss a process known as “3D Audio.” 3D Audio is sound reproduction that allows a listener to (1) hear sounds in a three-dimensional manner, as if the listener is in the original recorded sound field, and (2) precisely locate sound sources in that 3D space. For example, assume during a recording session that an insect flies in a circle around the recording microphones. A listener of the recording, played back through the loudspeakers of the 3D Audio system, would hear the same insect as if it were circling his or her own head. 3D Audio over loudspeakers has obvious applications for 3D cinema, 3D TV, pro audio, computer gaming, teleconferencing, medical aid for hearing-impaired patients, military training, virtual reality systems, and the multi-billion-dollar home entertainment industry. The lecturer will present the pros and cons of the three most promising methods for 3D sound reproduction: (1) Wavefield Synthesis, (2) Ambisonics, and (3) Binaural audio through loudspeakers. He will then discuss several recent advances covering the third “binaural method,” which have led to the development of the BACCH 3D sound technology at Princeton University. The lecturer will also discuss how the “binaural method” is capable of delivering the necessary cues for 3-D Audio to the ear-brain system using only two transducers (if the “crosstalk” between the left (right) transducer and the right (left) ear is canceled). However, one problem is that this crosstalk cancellation (XTC) inherently imposes a strong spectral coloration on the sound that is intolerable by audio engineering standards. But the team at Princeton has had a recent breakthrough which makes it possible to produce optimized XTC filters (called BACCH filters) that impose no spectral coloration to the sound. The design of these BACCH filters and their uses in various 3D Audio applications will be discussed. The talk will conclude with a demonstration of a BACCH 3D sound system. 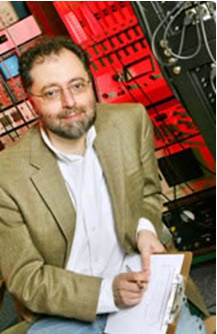 EDGAR CHOUEIRI is a professor of applied physics at the Mechanical and Aerospace Engineering Department of Princeton University and Associated Faculty at the Department of Astrophysical Sciences, Program in Plasma Physics. He is also Director of Princeton University’s Engineering Physics Program and Chief Scientist at the university’s Electric Propulsion and Plasma Dynamics Lab, a recognized center of excellence in research in the field of advanced spacecraft propulsion. He is also the director of Princeton’s 3D Audio and Applied Acoustics (3D3A) Lab. Professor Choueiri is a world-renown leader in the field of plasma physics and plasma propulsion for spacecraft. He is the author of more than 145 scientific publications, and encyclopedia articles on plasma rockets, plasma physics, instabilities and turbulence in collisional plasmas, plasma accelerator modeling, space physics and applied mathematics. An avid audiophile, acoustician and classical music recordist, his decades-long passion for perfecting the realism of music reproduction has led him to work on the difficult fundamental problem of designing advanced digital filters that allow the natural 3D audio to be extracted from stereo sound played through two loudspeakers, without adding any spectral coloration to the sound (i.e. without changing its tonal character). He was able to solve this problem mathematically by applying the analytical and mathematical tools he uses in his plasma physics research.

President John Ingersoll called the 2,296th meeting to order at 8:18 pm February 3, 2012 in the Powell Auditorium of the Cosmos Club. Mr. Ingersoll announced the order of business and introduced eight new members of the Society, including the speaker of the evening.

The minutes of the 2,295th meeting were read and approved.

Mr. Choueiri began by explaining that a bird chirping in the sky creates successive propagating density disturbances in the shape of concentric spheres, similar to how a pebble thrown in a still pond creates ripples of concentric circles. Three dimensional sound describes the ability to record the bird's chirping and then play that recording back in such a way that the listener perceives the bird to be in its original location. Modern sound systems can provide some directional information using multiple speakers surrounding the listener but the sound still seems to come from the speakers instead of the sound's original position at the time of recording, he said.

Mr. Choueiri then described two techniques for creating three dimensional sound. Wave field synthesis uses many microphones on a closed contour like a circle, then reconstructs the sound field using many speakers. While simple in theory, this approach requires many microphones, significant audio processing power, and is incompatible with existing recordings, he said. Ambisonics is similar to wave field synthesis but positions many microphones on a sphere and then reconstructs the sound field using spherical harmonics, also with similar disadvantages.

Mr. Choueiri explained that the human brain can determine a sound's position in space very accurately using several cues. The interaural temporal difference is the time difference between the arrival of sounds at the left and right ear, on the order of tens of microseconds. The interaural level difference is the loudness difference observed between the left and right ear, due to both the extra distance traveled to the far ear and the shielding role of the head. The brain also recognizes spectral cues when sound waves interact with the external part of the ear, the pinna, causing different attenuation depending on incoming direction.

Mr. Choueiri then discussed a third method for three dimensional audio involving binaural recording and crosstalk cancellation. Binaural recording uses two microphones in the ear canals of a dummy head of average proportions. If the left recording is heard only by the listener's left ear and the right recording by the listener's right ear, the sound is faithfully recreated. Crosstalk occurs when each ear hears the opposite channel, which corrupts the three dimensional cues and must be eliminated for the brain to receive the cues correctly, he said. Therefore, the audio emitted from the speakers must be modified to stop the left ear from hearing the right channel and vice versa.

Mr. Choueiri continued to explain how an audio filter could use negative sound pressure to create a signal separation barrier in space by modeling and inverting the sound mixing that occurs between the left and right signals in air. This technique has traditionally caused unacceptable coloration of the audio, affecting the tonal quality such that instruments and voices no longer sound correct. The main breakthrough in Mr. Choueiri's work is finding a way to create a crosstalk cancellation filter that does not impose a spectral coloration of the sound and instead has an effectively flat frequency response.

Mr. Choueiri then described the Band-Assembled Crosstalk Cancellation Hierarchy (BACCH) filter, which causes stereo speakers to alternately emit positive and negative images of the same sound, faster than the brain can resolve, to cancel the signal at the appropriate ear. By mathematically optimizing the filter's characteristics, it is possible to perform this cancellation with the minimum amount of spectral coloration penalty. Mr. Choueiri concluded by giving a demonstration of three dimensional audio using a portable stereo speaker prototype equipped with the BACCH filter.

After the question and answer period, Mr. Ingersoll thanked the speaker, made the usual housekeeping announcements, and invited guests to apply for membership. At 10:06 pm, President John Ingersoll adjourned the 2,296th meeting to the social hour.