The 2,211th Meeting of the Society

Unraveling the Secrets of the Polar Ice Sheets

Recent media attention on the subject of global warming and sea level rise has focused public attention on the research of polar glaciologists. This talk will explain some of the recent work funded by the National Science Foundation’s Office of Polar Programs. The glaciology program is concerned with the study of the history and dynamics of all naturally occurring forms of snow and ice, including floating ice shelves, glaciers, and continental and marine ice sheets. Program emphases include paleoclimate from ice cores, ice dynamics, numerical modeling, glacial geology, and remote sensing of ice sheets. In addition to single investigator grants and multi-institutional, multi-investigator projects, the Foundation is now funding a Science and Technology Center, the Center for the Remote Sensing of Ice Sheets (CReSIS) whose goal is to understand and predict the role of the polar ice sheets in sea level change. One of the objectives of the Center is to enhance public awareness of climate change and its effects and to share information with students and the general public. The upcoming International Polar Year 2007-2008 will be another vehicle for exposing the public to the science of climate change in the polar regions. 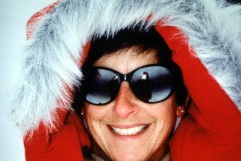 JULIE M. PALAIS is the Program Director of the Antarctic Glaciology Program of the Office of Polar Programs in the National Science Foundation. She has directed polar research at NSF since 1990. Her programs have emphasized glaciology and ice cores of the Antarctic and the Arctic, especially the effects of volcanic fallout. She has made numerous trips to the poles observing the research conducted under her NSF program. Palais Glacier and Palais Bluff in the Antarctic have been named in her honor. Before coming to NSF she did research at the University of New Hampshire, the University of Rhode Island, and Ohio State University. Much of her work involved expeditions to the Arctic and Antarctic. She is a member of the American Geophysical Union, the International Glaciological Society, the Explorers Club and the American Polar Society. She holds a B.A. cum laude from the University of New Hampshire and an M.S. and Ph.D. from Ohio State University.

President William Saalbach called the 2,211th meeting to order at 8:18 pm November 3, 2006 in the Powell Auditorium of the Cosmos Club. The recording secretary read the minutes of the 2,210th meeting and they were approved.

Mr. Saalbach introduced the speaker of the evening, Ms. Julie Palais, of the Office of Polar Programs of the National Science Foundation. Ms. Palais, who is in charge of Antarctic research, spoke on Unraveling the Secrets of the Polar Ice Sheets, A Glaciological Perspective.

The Antarctic, Ms. Palais began, is the coldest, windiest, highest, driest continent on earth. It is covered by an ice sheet of 29 million cubic kilometers, about the size of the U.S. and Mexico. There are ice-free coastal areas called the dry valleys and at McMurdo Sound, where the main U.S. Station sits.

There are also stations at the South Pole and one called Palmer Station. The average temperature is -56°F. In the summer, it gets as high as 0 at the pole and as high as 50°F at McMurdo Sound.

The exciting thing about the WAIS (Western Antarctic Ice Sheet) Divide ice core is that the high accumulation rate will provide detailed resolution so they can look at things like greenhouse gasses. They hope to be able to determine whether, for example, greenhouse gasses rose in the atmosphere before the climate change or vice versa.

They use the stable-isotope content of the ice, which is a proxy for the temperature. The greenhouse gasses, methane and CO2, correlate highly with the temperature. She said it’s obvious that there is a causal relationship, but the question is: Which comes first?

Biology in ice cores has generally been an afterthought. Now they include biologists in the projects from the beginning.

With these resources, they plan to learn more about five subjects, climate forcing by greenhouse gases, the role of Antarctica in abrupt climate change, the relationship among northern, tropical, and southern climates, the stability of the West Antarctic ice sheet, and the biological signals contained in deep ice cores.

One dramatic finding from ice cores: climate change can be quite abrupt. U.S.-European projects in Greenland in the 1989-’94 period pulled long cores that revealed that in the warming period about 11,500 years ago, temperatures rose 10°C in a very short period. Detailed analysis established that most of that change happened in less than ten years! This lends great interest to some of the Antarctic research now beginning. The WAIS Divide ice core will provide Antarctic records of environmental change with the highest possible time resolution for the last 100,000 years, and will be the Southern Hemispheric equivalent of the Greenland studies. These studies may determine whether greenhouse gases followed or preceded climate change.

She described a variety of exploration now ongoing that goes back to the early days, traveling the continent on the ground – “traverses.” The research data comes from snow pits, ice cores, and glaciological analysis to interpret ice core data. Starting in about week, a group was to traverse from Taylor Dome to the South Pole.

She described their work on high risk – high impact icebergs and ice shelves. The sudden breakup of the Larsen B-15 shelf off the Ross Ice Shelf in March, 2000 produced high interest in these. They are now conducting collaborative research on the world’s largest icebergs. Exciting results featured recently in the media linked a storm in the Gulf of Alaska to iceberg calving in Antarctica. They are now looking for implications for future global warming and for ice sheet changes.

The Larsen B Ice Shelf breakup was quite dramatic. A large structure which had been stable for a long time, it disintegrated totally between January 30 and March 4, 2002. Although sea level rise comes only from ice coming off land, not off the sea, where the ice shelf was located, the ice shelves do restrain the flow of icebergs that feed into them.

New methods on the horizon being applied to ice research include what they call “Fastdrill” “LARA.” Fastdrill will enable them to drill rapidly through the ice, get quickly down to the base, put instruments down and study heat flow. LARA, long-range aircraft for research in Antarctica, will enable them to fly over vast ice sheets and take measurements.

Speaking of horizons, she ended with a spectacular picture of the horizon of Antarctica from just over the lip of the Ross Ice Shelf, where the edge rises vertically out of the sea.

Then she spoke a little of her personal experiences. She went first in 1978 as a graduate student. They went to New Zealand where people pick up plenty of mittens, wool socks, and long underwear. They get on a plane that looks like a giant, pregnant guppy. The first views of the ice are very impressive. McMurdo is an island, not actually part of the continent. There is a peninsula where McMurdo Station is located. She showed pictures of the dry valleys and of Scott’s Discovery Hut, which has sat there, unchanged, in a deep freeze since Scott left it. She showed a picture of the South Pole, which the lucky members and guests of the 2,211th now know looks just like a barber pole. The pole moves about 10 meters a year, so they move the candy-stripe marker. The big planes land on skis at the Pole. The planes are owned by NSF and the New York Air National Guard, and the Guard does all the flying. She showed a picture of Sir Edmund Hillary chatting with people at the South Pole, a picture of the dining hall, and mentioned that they just keep the food out in the ambient temperature there.

She also showed pictures of Palais Glacier, named for her, and Colwell Mountain, named for former NSF Director Rita Colwell. She noted that the clear skies down there are great for astronomy.

She offered to answer questions. In response, she made these points:

- She couldn’t say for sure whether it is a misuse of the data to say that CO 2 is causing the changes. The scientists want to see more data on the question.

- Available data are not adequate to say whether Antarctica is growing or shrinking.

- Clearly super-volcanoes do have major effects on temperature in the polar regions and elsewhere. Even the Pinatubo eruption in 1991 had obvious effects.

- The latest about Lake Vostok is that the Russians are drilling into it. Now 70 sub-ice lakes have been discovered.

- There’s a lot of excitement about the possibility of life in the ice cores.

Mr. Saalbach announced the next meeting. He presented Ms. Palais a plaque commemorating the event. He made a pitch for support and bragged of our exciting schedule of meetings. He made the parking announcement. He invited everyone to stay for the social hour. Finally, he adjourned the 2,211th meeting at 9:41 pm to the social hour.