The 2,423rd Meeting of the Society

Robots are slowly entering many aspects of daily life.  Among a wide range of applications, they open up avenues to mass customization, enable innovative ways to improve the quality of life for the infirm and the elderly in an aging society, and ensure the  safety of first responders and improve their abilities to deal effectively with exigent, difficult and dangerous situations.

Progress on new materials, embedded systems, sensors and machine learning/artificial intelligence is enabling the design of robots that can empower people across work, home, and leisure.  Integration of  these improvements in sensing, planning, and actuation is making possible a new generation of intelligent robotic systems.

This lecture will discuss the major trends, the key challenges to designing intelligent systems, and the underlying models for perception, planning, and control of robots.  The lecture will give examples of the design of next generation robots for assisting people in their daily lives across manufacturing, transportation, and security applications.  And it will outline the current thinking on how robots will impact our lives in the coming decade. 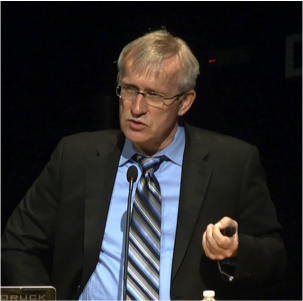 Henrik I. Christensen is the Qualcomm Chancellor’s Chair of Robot Systems, Professor of Computer Science in the Department of Computer Science and Engineering and Director of the Institute for Contextual Robotics at the University of California at San Diego (UCSD).  He is also an active member of the European Network of Excellence in Robotics, which he founded.  Prior to joining UCSD he was Distinguished Professor of Computer Science and held the KUKA Chair of Robotics at the Georgia Institute of Technology (Georgia Tech).  He also was Founding Director of the Institute for Robotics and Intelligent Machines at Georgia Tech.

Henrik’s research focuses on robotics and artificial intelligence, with an emphasis on a systems view and systems integration.  Among many other interesting projects, he was the Principal Investigator of Georgia Tech’s team in DARPA’s first self-driving vehicle Urban Grand Challenge.

He is the main editor of the US Robotics Roadmaps of 2009, 2013, and 2016, which served as the basis for the National Robotics Initiative.  He is now working on the 2020 Roadmap.  Henrik also serves as associate editor on numerous AI and robotics journals.

Henrik is author of more than 350 scientific and engineering publications in the fields of artificial intelligence, computer vision, and robotics.  He co-founded several companies, including ROBO Global and Robust.AI.  He serves as an advisor to a large number of companies and agencies across four continents.  And his work has been adopted by many enterprises, including Electrolux, ABB, KUKA, Weda, BMW, Boeing, iRobot, PerMobil and General Motors. Henrik’s work has been featured in major media such as CNN, BBC, NY Times, and the Financial Times.

Among many other honors and awards, Henrik was awarded the “Joseph Engelberger Award” and named “Boeing Supplier of the Year.”  He was awarded an honorary Doctorate in engineering from Aalborg University.  And he is an elected fellow of the IEEE and AAAS.

On June 26, 2020, by Zoom videoconference broadcast on the PSW Science YouTube channel, President Larry Millstein called the 2,423rd meeting of the Society to order at 8:03 p.m. EDT. He announced the order of business, that the evening’s lecture would be livestreamed on the internet, and welcomed new members to the Society. The Recording Secretary then read the minutes of the previous meeting.

President Millstein introduced the speaker for the evening, Henrik I. Christensen, Professor of Engineering and Director of the Contextual Robotics Institute at the University of California at San Diego. His lecture was titled “Contextual Robotics: Making Intelligent Robots that Serve Society.”

Christensen’s work addresses how robots can empower people in their everyday lives. Increasingly, people desire to purchase individualized products. The world’s population is also both aging and urbanizing. These shifts are growing demand for robotics. Technological advances in creating smaller, more powerful electronics, are making it possible for robotics to operate in previously inaccessible contexts. Together, these developments are causing corporations to evolve from their traditional strategies.

Christensen addressed the current generation of commercially available companion robots. He said most of these robotics fail because they are insufficiently robust, for example by limitations in current battery technology, and lack the sophistication required to effectively navigate their environments. While modern homes vary in design, their layouts vary relatively little compared to other structures and to outdoor environments. Aging populations also demand robotics to aid them in maintaining autonomy. It is unsurprising, then, that robotics intended to replace simple human tasks with limited environmental variations, like home vacuuming, have succeeded. Christensen predicts home robotics will continue to facilitate robotic advances.

In a post-covid world where humans will be less inclined to touch robotics to instruct them, Christensen said the next frontier will be operating robotics in varying social contexts, which change the meaning of words and symbols. One step toward that goal is improving biometrics, for example understanding human affective states through improved facial and body tracking.

Christensen lastly discussed next generation transportation. In 2016, the average moving speed in London was 5 miles per hour slower than it was in 1916, when people traveled by horse and buggy. Pre-pandemic, increasing urbanization increased congestion, which in turn increased people’s average commute times. Manufacturing faster cars is not the solution. Rather, Christensen said, entire transportation systems must be overhauled to maximize autonomous travel.

Because humans travel all over the world, fully autonomous transportation would need to navigate virtually unlimited contextual variations. Researchers at UCSD have begun modeling those variations and experimenting with autonomous mail delivery vehicles equipped with a suite of sensors, including six cameras and LIDAR. The researchers are currently working on anticipating actions, such as whether a pedestrian will cross the street. Long-term evaluation will be essential to success.

Christensen then answered questions from the viewing audience. One member asked about data governance to protect user privacy. Christensen said researchers are working to reduce the amount of novel information transmitted from robots. For example, the UCSD autonomous mail vehicles substitute pedestrian faces with fakes.

A member viewing from Australia asked about variable latency and bandwidth considerations for robotics in space. Christensen said the German Aerospace Center, or DLR, is working to leverage more powerful ground-based computing to run simulations and communicate predictions to space-based robotics in a model-based approach to the problem.

Temperature in Washington, D.C.: 31° C
Weather: Partly Cloudy
Viewing Through the Live Stream on Zoom: 28, and on the PSW Science YouTube Channel: 38