The 2,438th Meeting of the Society

Programming Beyond the Limits of Human Knowledge and Reason

The wisdom of crowds hinges on the independence and diversity of their members’ information and approach. This lecture will explore the wisdom of scientific crowds for discovery and invention, showing how findings established by more distinct methods and researchers are much more likely to replicate, how a population of diverse small teams advances science more rapidly than large ones, and how diverse prior experiences are critical for punctuated advances.

Artificial Intelligence has typically been designed to substitute for human expertise rather than complement it, limiting its capacity for human benefit. This lecture will demonstrate how incorporating a wide distribution of human expertise into AI models allows design diversity that complements and corrects for collective human bias, generating “alien” hypotheses unlikely to be imagined or pursued without intervention. The lecture will describe how AIs developed with this approach are leading to advances in materials discovery, drug development and effective COVID-19 vaccines. The lecture will discuss how to design diverse human and artificial intelligence collectives that will expand our imaginations and reach past current limits – of both human and machine intelligence and insight. 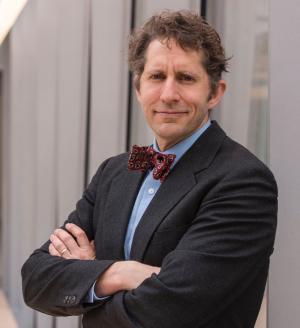 James Evans is Professor of Sociology, Faculty Director of Computational Social Science, and the Director of Knowledge Lab at the University of Chicago and the Santa Fe Institute.

James uses large-scale data, machine learning and generative models to understand how collectives think and what they know. His research involves inquiry into the emergence of ideas, shared patterns of reasoning, and processes of attention, communication, agreement, and certainty. Thinking and knowing collectives like science, Wikipedia and the Web as a whole involve complex networks of diverse human and machine intelligences, collaborating and competing to achieve overlapping aims. His work connects the interaction of these agents with the knowledge they produce and its value, both internally to them and externally. He also works to design artificial collective intelligences that draw on discovered principles in areas ranging from science and technology to entrepreneurship and civic discourse.

James is an author on numerous peer reviewed publications and technical reviews.

James earned a BA in Anthropology at Brigham Young University, and an MA and PhD at Stanford University.

On April 9, 2021, by Zoom videoconference broadcast on the PSW Science YouTube channel, President Larry Millstein called the 2,438th meeting of the Society to order at 8:02 p.m. EDT. He welcomed new members, and the Recording Secretary read the minutes of the previous meeting.

President Millstein then introduced the speaker for the evening, James Evans, Professor of Sociology, Faculty Director of Computational Social Science, and the Director of Knowledge Lab at the University of Chicago and the Santa Fe Institute. His lecture was titled, “Designing Alien Artificial Intelligences: Programming Beyond the Limits of Human Knowledge and Reason.”

Evans began with a question, “What kind of Artificial Intelligence (AI) do we want?”

Scientists in the 20th century established human intelligence as the standard by which AI was measured. Scientists programmed machines to play games like checkers and chess, and measured their success by competing those machines against human players. Evans questioned whether continuing to target AI to human performance is the most efficient and ethical investment.

Alternatively, in 1955, William Ashby proposed AI as “Amplifying Intelligence.” Ashby and others posited that humans could augment their intelligence by minimizing the transaction cost between human thought and objectives. Instantiations of this concept include computer mice, file systems, and EEG helmets.

Asking, “is that all?” the speaker described 21st century competitions including the Netflix algorithm prize and international chess tournaments. Ensemble teams consistently won. The speaker then posited that science is advanced through abduction, the logic process formulated by Charles Sanders Peirce, by which hypotheses are based on surprising (or theory-defying) evidence. According to the speaker’s research, the “unpredictability” of a scientific paper’s conclusions predicts the likelihood of the paper receiving a major award like the Nobel Prize.

The most predictive factor for “unpredictable” papers is the novelty of the scientific team’s expedition from their area of expertise. Evans said discovery occurs in conversation between insiders who identify familiar puzzles and outsiders who solve those puzzles with alien patterns.

Evans is now working on whether scientists can create alien intelligences that increase the likelihood of major scientific discoveries. Regarding his research on the replicability of published pharmacology research, Evans said findings from decentralized communities using different methods, citing to different sources, are more likely to replicate. His analysis of clinical trial data produced similar results.

In 2019, Nature published a paper about “unsupervised” AI that studied material science literature and predicted forthcoming new materials with 40% precision. Evans said the AI was successful because it was not bound by the scientific community’s accepted inferences and methodologies. He then described how his research team significantly improved a similar AI’s success rate by giving it general guidelines to de-randomize its crawls.

The team tested their enhanced AI on scientific literature for: thermoelectricity, ferroelectricity, photovoltaics, pharmaceuticals, and SARS-CoV-2 vaccination agents. The AI consistently replicated the inferences that human researchers ultimately reached to make scientific advancements, and predicted what teams would make those advancements.

In sum, Evans said his research showed that to generate robust insight and rapidly advance technology, scientists need an ensemble of diverse intelligences, both human and AI. In that pursuit, scientists need to design alien intelligence that is not bound by the limits of human cognitive influences. However, he cautioned that scientists must be mindful of hybrid vigor, which requires a balance of both difference and re-combinability between ensemble members.

Temperature in Washington, D.C.: 14° C
Weather: Cloudy
Concurrent Viewers of the Zoom and YouTube live stream, 91 and views on the PSW Science YouTube and Vimeo channels: 325.