The 2,437th Meeting of the Society

The Clipper Mission to Europa

Europa, an intriguing moon of Jupiter, has an icy exterior but likely harbors a deep salty ocean beneath. Owing to its slightly eccentric orbit, Europa undergoes tidal forcing that not only provides heat that maintains a liquid ocean, but also may cause hydrothermal activity at its seafloor. This influx of chemistry, along with a potential influx of surface composition from ice–ocean exchange, may allow the reductant-oxidant mixing needed to support a habitable environment within Europa’s ocean.

The Europa Clipper mission (https://europa.nasa.gov) will explore how habitable Europa’s ocean is and seek to understand further its geology, ice shell, ocean, composition, and any current geological activity [1]. Harboring the needed conditions and ingredients for supporting life, potential follow-on missions would search for biosignatures , potentially making the first discovery of life beyond Earth.

Construction of the Europa spacecraft and its payload of in situ and remote-sensing instruments is currently underway, and the mission is scheduled for launch in the mid 2020s. The payload suite includes four in situ instruments that measure fields and particles [2]: the Europa Clipper Magnetometer; the Plasma Instrument for Magnetic Sounding; the Surface Dust Analyzer’ and the Mass Spectrometer for Planetary Exploration. And it includes five remote sensing instruments covering a very wide range of wavelengths, from from the ultraviolet through radio (radar) [3]: the Europa Ultraviolet Spectrograph, the Europa Imaging System, the Mapping Imaging Spectrometer for Europa, the Europa Thermal Imaging System, and the Radar for Europa Assessment and Sounding: Ocean to Near-surface. The spacecraft also will conduct gravity and radio science using its telecommunication system, and additional data will be obtained from the spacecraft’s radiation monitoring system.

The Europa Clipper mission is planned to make more than 40 globally distributed flybys executed over a period of ~3.5 years to access a diverse and widely distributed set of locations and geologic terrains, providing data to constrain and test geophysical and geochemical models of the ice shell and ocean [2, 3]. Additionally, the data will provide a base to locate safe and scientifically interesting sites for future landed missions.

A Europa Lander mission [4, 5], currently under study, would collect surface samples and look for biosignatures and study the geology, composition, and structure of the moon at the lander scale. Studies have also have been performed [6] and technical developments [7, 8] are underway for tunnelbots/cryobots that will melt or drill their way through the ice to reach the ocean with instrumentation [9, 10] to search for life.

As we wonder: “Does Europa have all the right conditions and ingredients to sustain life?” we look forward to finding out from the data the Europa Clipper mission will send back to us. 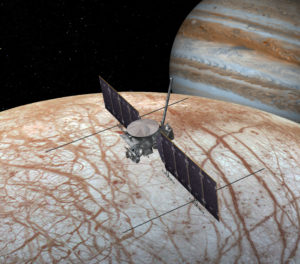 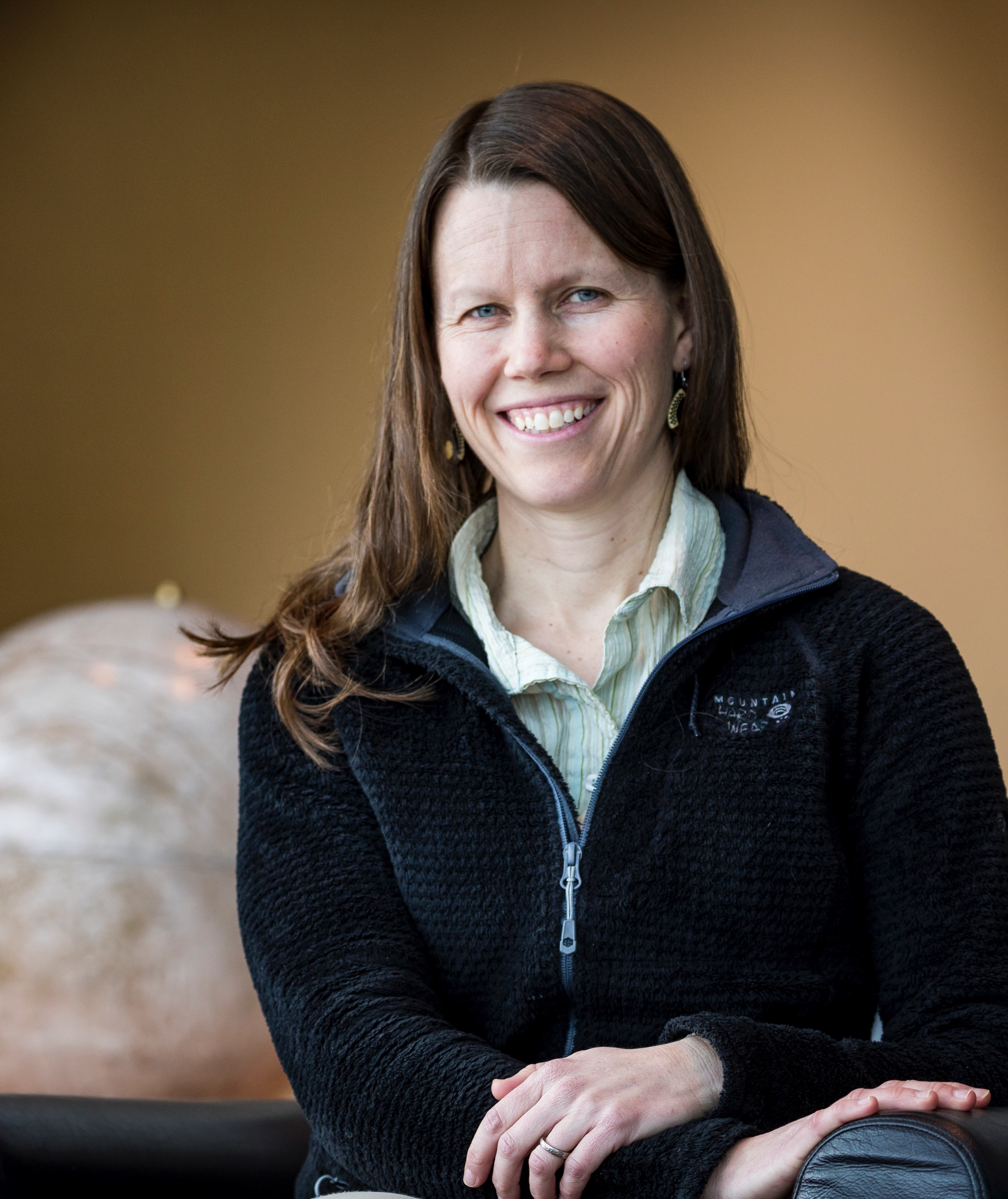 A main focus of Kate’s current work is developing the Europa Clipper, NASA’s mission to Jupiter’s icy moon Europa, to investigate its geology, geological activity, and habitability. In particular, she is working with Clipper instrument and project teams developing the science measurement requirements and defining operations during the cruise phase to and after arriving at Europa.

Kate also is working on several studies and research projects for future landed and subsurface ocean world exploration missions, including being on the project science team for a future landed mission on Europa, serving as Principle Investigator for a project to develop the communication technology for future subsurface ocean world cryobots, and working to develop a microfluidic sample preparation device for in situ purification of amino acids, DNA/RNA, and other biosignatures.

In addition to this work, Kate’s research interests include modeling fluid intrusions and fracture mechanics on ocean worlds like Europa and in hydrothermal systems such as those on Mars. In addition to theory and modeling, Kate does field work to test her models and provide insight into the physics of geologic and biological processes that may be occurring on other worlds, work that taken her to test sites in Iceland, Antarctica, and Utah.

Kate is an author on numerous publications on her research and engineering work, and has given many keynote and invited presentations on her work.

In addition to other honors and awards, Kate is the recipient of the JHU APL Hart Development, numerous APL IRAD awards for microfluidic sample preparation, a JHU APL OSCAR peer award, she was selected as a Lewis and Clark Field Scholar in Astrobiology, and she was one of the 50 finalists in the 2017 NASA Astronaut selection process (out of 18,000 applicants).

On March 19, 2021, by Zoom videoconference broadcast on the PSW Science YouTube channel, President Larry Millstein called the 2,437th meeting of the Society to order at 8:02 p.m. EST.

President Millstein announced that March 13, 2021, marked 150 years since the Society was formally founded at the Smithsonian Castle in Washington, D.C. On the anniversary day, members of the General Committee gathered at the castle to commemorate the Society’s achievement. President Millstein then toasted to the Society with the online audience. He then welcomed new members, and the Recording Secretary read the minutes of the previous meeting.

President Millstein then introduced the speaker for the evening, Kate Craft, Staff Scientist in the Space Exploration Group at Johns Hopkins University, Applied Physics Laboratory. Her lecture was titled, “The Clipper Mission to Europa: Exploring a Potentially Habitable Ocean World.”

Roughly the size of Earth’s moon, Europa is the smallest of the four Galilean satellites of Jupiter. Europa is an ice covered moon that flexes while orbiting Jupiter. This flexing induces heating throughout the moon in a process scientists call “tidal heating.” Europa also has an induced magnetic field, indicating there is a salty liquid ocean beneath its surface.

It is possible that tidal heating could be inducing hydrothermal activity at the sea floor, enabling the ocean to stay liquid. Based on Earth analogs, hydrothermal activity on Europa could also support life. Craft then showed images of Europa’s surface and described its various regions including ridges, bands, “subsumption” zones, and impact structures.

There is currently some evidence for plumes ejecting through Europa’s surface ice. But, Craft said, while some observations have been “intriguing,” they have not been repeatable or observed again.
NASA’s Europa Clipper mission will explore Europa to investigate its habitability by investigating its ice shell, ocean composition, and geology. Its geology objective includes reconnaissance for a potential future lander. Craft then described in detail Europa Clipper’s ten science investigations.

Five investigations will be remote sensing:

Five investigations will be in situ:

1. Europa Clipper Magnetometer will investigate the ocean by magnetic field induction at multiple frequencies, identify sources of atmosphere, and understand the coupling of Europa to Jupiter’s ionosphere and coupling of plumes to flowing plasma.
2. Plasma Instrument for Magnetic Sounding (PIMS) will determine Europa’s magnetic induction response to estimate ocean salinity and thickness, understand weathering and material release into the atmosphere, and Europa’s influence in its local environment.
3. Gravity and Radio Science Investigation will use a suite of antennae sending signals to Earth, to monitor its trajectory changes and determine Europa’s gravitational tides and the existence of the subsurface ocean.
4. MAss Spectrometer for Planetary EXploration (MASPEX) will determine the distribution of major volatiles and key organic compounds in Europa’s exosphere and their association with geological features, and their abundance in the ocean.
5. SUrface Dust Analyzer (SUDA) will map the surface composition of Europa and characterize the alteration of that surface via exogenous dust.

Craft then described the current status of Europa Clipper’s instrument hardware. The spacecraft will be powered by two sets of five solar arrays. The nine instrument suites will be mounted so that like instruments face the same direction, maximizing the number of investigations that can collect data on any given flyby.

The most recent trajectory assessment is for Europa Clipper to launch in October 2024, and use a Mars-Earth Gravity Assist (MEGA) assist to arrive at Europa in April 2030. The mission is for at least 40 flybys in an approximately three-and-a-half-year prime tour over Europa’s Jovian and anti-Jovian hemispheres, covering approximately 80% of the moon’s surface. Data will be returned to Earth based on priority order: decisional, encounter, mission, and opportunistic.

Craft concluded by briefly summarizing her work on a Europa Lander Mission Concept and a Europa Tunnelbot Mission Concept. She then answered questions from the online viewing audience.

Temperature in Washington, D.C.: 7° C
Weather: Windy
Concurrent Viewers of the Zoom and YouTube live stream, 141 and views on the PSW Science YouTube and Vimeo channels: 639.