The 2,446th Meeting of the Society

Taking the Twinkle Out of the Stars

The main characteristic of an astronomical telescope is its diameter, defining both sensitivity and angular resolution.  Ground-based telescopes have steadily grown in size, enabling observations of exoplanets, black holes, distant galaxies, and many other astronomical objects.

Until recently, however, their resolution was limited by the distortions that occur as light passes through the atmosphere.  The absence of these distortions in space is the primary reason the observations from the Hubble Telescope were so revolutionary, even though its aperture and light gathering ability were far smaller than many large telescopes on earth.  Now, thanks to real-time compensation of atmospheric turbulence by Adaptive Optics, large telescopes can operate at the diffraction limit, delivering images ~100x sharper than the uncorrected seeing limit.  This lecture will discuss how Adaptive Optics works and how its implementation in large observatories leverages recent advances in optics and high performance computing

The upcoming generation of 30-m class telescopes will bring orders-of-magnitude gains in sensitivity with adaptive optics.  The lecture will discuss some of the advances expected for these instruments.  One particularly exciting application that will be discussed is search for life by imaging and spectroscopy of nearby habitable exoplanets. 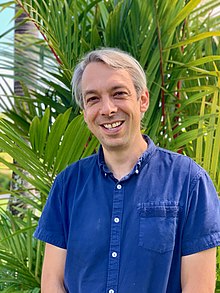 Olivier Guyon is Professor in the Department of Astronomy and Astronomer in the College of Optical Sciences and the Steward Observatory at the University of Arizona.  He also is Affiliated Professor with the Astrobiology Center of the Japanese National Institutes of Natural Sciences and serves as Extreme Adaptive Optics Project Scientist for the Subaru Telescope of the National Astronomical Observatory of Japan.  He is also a member of the Magellan extreme-AO development team.

Olivier developed the Phase-Induced Amplitude Apodization (PIAA) Coronagraph, a highly efficient optical device to mask light from a star while preserving light from planets around it.  And he is currently leading the Subaru Coronagraphic Extreme Adaptive Optics group at the Subaru Telescope to use these new techniques on the Subaru telescope for exoplanet detection and characterization.

Oliver is an author on over 169 refereed publications and more than 486 non-refereed publications.  Among other honors and awards he is a MacArthur fellowship awarded, a recipient of a Presidential Early Career Award for Scientists and Engineers, and of the Guinier Young Researcher Award of the French Society of Physics.

Olivier earned his undergraduate degree at the École Normale Supérieure of Paris and his PhD in Astronomy at the University Paris.

“The search for other Earth-like planets” TED-Ed – https://www.youtube.com/watch?v=JTNY92xeFS0

On October 8, 2021, by Zoom webinar broadcast on the PSW Science YouTube channel, President Larry Millstein called the 2,446th meeting of the Society to order at 8:02 p.m. EDT. He welcomed new members, and the Recording Secretary read the minutes of the previous meeting.

President Millstein then introduced the speaker for the evening, Oliver Guyon, Professor of Astronomy and Astronomer at the Steward Observatory at the University of Arizona. His lecture was titled, “Taking the Twinkle Out of the Stars: How Adaptive Optics on Ground Based Telescopes Delivers the Sharpest Images of Our Universe.”

The Subaru Telescope is an 8 m telescope atop Mauna Kea in Hawai’i, where Guyon leads the Coronagraphic Extreme Adaptive Optics group. Building telescopes with larger primary mirrors that collect more light are necessary to increase image resolution and see deeper into space.

Guyon explained diffraction by a circular aperture, which produces a bright center surrounded by diffraction rings. In principle, this “airy pattern” is inverse linear related to the diameter of the telescope; the bigger the telescope, the smaller the pattern. But in reality, atmospheric turbulence limits the angular resolution of traditional ground-based telescopes. For this reason, the 2.4 m Hubble Space Telescope achieves significantly greater resolution than much larger ground-based telescopes.

In the 1990s, scientists began developing adaptive optics for ground-based telescopes. In principle, adaptive optics corrects aberrated light using a mirror that can quickly change shape to exactly compensate for the optical distortion. The system uses a wavefront sensor to measure the shape of the distortion in real time.

Guyon said the next big revolution in adaptive optics is to expand the field of view. Doing so requires multiple correcting mirrors and multiple (either natural or laser) guide stars. This technology already exists in the Gemini Multi-Conjugate Adaptive Optics System (GeMS), which uses five laser guide stars to produce high-resolution wide-field images.

The speaker’s specialty is in high-contrast “extreme adaptive optics.” He is designing systems aimed at finding and imaging exoplanets, which does not require wide field of view. The technology is “extreme” because it exquisitely corrects wavefronts aberrated more than a micron, to produce an image limited by diffraction. Guyon and his team then deploy a coronagraph to remove the diffraction, allowing them to then search the image for planets closely orbiting the subject star.

Imaging planets allows spectroscopy to measure atmospheric composition, which may reveal evidence of life on a planet’s surface. The speaker used a spectrum of Earth obtained by observing Earth’s reflection on the moon, to identify the kinds of bio-markers that scientists hope to find on exoplanets. It has been hard to image habitable exoplanets because the planets are millions to billions less bright than the stars they closely orbit.

The speaker then described the Subaru Coronagraphic Extreme Adaptive Optics system. Because the telescope’s field of view is so small, it is able to condense light from the 8 m primary mirror to a beam only 2 cm wide. The telescope then uses extreme adaptive optics to correct atmospheric turbulence, a coronagraph to mask the light of the bright star, and smart image processing to recognize planets. Guyon used images to demonstrate each step in the system’s process.

He said his work is validating technologies for use on larger telescopes like the 30 Meter Telescope, the Giant Magellan Telescope, and the European Extremely Large Telescope. These telescopes will transition scientists from imaging only Jupiter-like planets to imaging Earth-like planets around nearby stars.