The 2,453rd Meeting of the Society

Challenges and Progress on the World's Largest Telescope

Of the three very large telescope projects currently underway, the European Southern Observatory’s Extremely Large Telescope (the EELT) has the largest aperture, involves the most mirrors and has the most complex light path, involving five distinct mirror assemblies.  After overcoming several difficulties and a number of delays – not surprising for such a complex project – substantial progress is being made on the telescope in Europe and on site in Chile.  Indeed, construction of the EELT is now proceeding at full speed with more than 35 large industrial contracts in place to build the telescope and observatory infrastructure, and four agreements with consortia of astronomical research institutes to develop the first suite of scientific instruments.

The first structural concrete for the foundation has been poured at the Cerro Armazones site in Chile.  A large facility has been built a few miles away on Cerro Paranal to host a large fraction of the ELT Assembly Integration and Verification work, as well as future mirror maintenance activities.  In Europe, many pieces of hardware have been fabricated.  Prototypes, qualification and validation models of critical components have been produced, including nanometric-precision M1 mirror position actuators, M1 mirror edge sensors and M1 mirror segment supports.

Many components are now in the serial manufacturing phase and deliveries of components are underway, including several hundred M1 mirror segment blanks and M1 segment supports, the M2 and M3 mirror blanks, and a full set of petals for the M4 mirror, to name a few.  In addition, the designs of the scientific instruments have also progressed well.  All of them have passed Preliminary Design Review and are heading towards Final Design Review.  The project is now fully funded and the First Scientific Light is expected for the end of 2027.

This lecture will discuss the design of the ELT, summarize the current status of the construction project, and briefly outline the science that the telescope will undertake once it is completed. 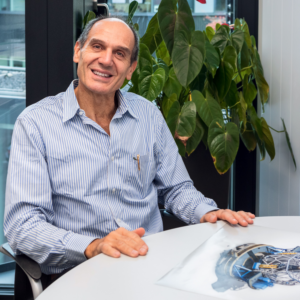 Among other engagements in his long and distinguished career at ESO, Roberto served as Project Engineer on the ESA Hypersonic Plasma Wind Tunnel Project at the Italian Aerospace Research Center, as a Mechanical Engineer at ESO’s Paranal Observatory, and as head of Engineering and then Deputy Director of ESO’s La Sillia-Paranal Observatory.

Roberto was educated at Naples University Federico II and then at the University of California, Berkley.

On February 11, 2022, by Zoom webinar broadcast on the PSW Science YouTube channel, President Larry Millstein called the 2,453rd meeting of the Society to order at 8:02 p.m. EST. He welcomed new members, and the Recording Secretary read the minutes of the previous meeting.

President Millstein then introduced the speaker for the evening, Roberto Tamai, Program Manager for the European Southern Observatory’s Extremely Large Telescope (ELT) project. His lecture was titled, “The ESO’s ELT: Challenges and Progress on the World’s Largest Telescope.”

Tamai summarized the instruments and research at La Silla Paranal, ALMA, and CTA-S. He then introduced the ELT, which will be the largest ground-based visible and infrared telescope in the world.

ELT construction began in 2014, and is expected to take its first images in 2027, as part of La Silla Paranal observatory. When complete, the ELT will have a 39.3 m primary mirror with adaptive optics and take images 15 times sharper than those from the Hubble Space Telescope.

When complete, the ELT will: search for exoplanets and explore Earth-twins, test the validity of General Relativity around a super-massive black hole, resolve star populations, address questions regarding the large redshift universe, and questions of cosmology and fundamental physics. In so doing with such a powerful telescope, Tamai said the ELT’s research will lead into the unknown.

The speaker then described the ELT’s hardware. With a footprint approximately the size of the White House, the main structure will sit atop alt-azimuth mounts to point and track target objects. Opto-mechanical units will be jointly capable of re-aligning themselves, refocusing, stabilizing the image, and computing for external perturbations. The focal plane and embedded metrology systems will measure the state of the telescope and the atmosphere. All these instruments are necessary to compensate for environmental factors such as gravity, wind, atmospheric turbulence, and earthquakes, to stabilize the telescopes images.

Tamai then described the ELT’s 5-mirror anastigmat concept. Light first will first encounter the ELT’s main primary mirror, comprised of 798 near-hexagonal segments organized in six petals, all realigned in real time. Light will then reflect 60 m to the secondary mirror, 60 m to the tertiary mirror, then a shorter distance to a 2.4 m deformable fourth mirror. The deformable mirror will incorporate adaptive optics to compensate for perturbations, before reflecting the light to a fifth fast-tilting mirror that will guide it to science instruments.

Most contracts have completed their design phase, including the four instruments, and are currently in the manufacturing phase. Around a quarter of the contracts have been integrated. Tamai then reviewed some of the ELT’s largest contracted works. He described the manufacturing, shipping, and installation processes for the the dome and telescope main structure and commented that – although Covid-19 halted construction for one year – progress quickly resumed in May 2021.

The primary mirror and its 133 spare segments will require more than 10,000 components. German manufacturer Schott is manufacturing the 50 mm thick mirror segments from a glass-ceramic called Zerodur. They are being delivered in batches to another company for finishing. The segment supports have been designed and are now being produced by a Dutch firm. So far, 360 of 949 segment blanks and 293 of the 936 segment supports have been delivered.

The primary mirror also requires approximately 2,500 position actuators plus control electronics, and edge sensors. Manufacturers have so far delivered the first batch of each component.

Tamai then summarized the production of the ELT’s other four mirrors, identifying technological specifications and completion timelines of each. ELT assembly and mirror maintenance infrastructure is also underway. And, the laser guide star system is nearing its final design.

The speaker concluded the lecture by briefly describing the technical specifications and research to be conducted by the ELT’s four initial instruments, and recapping the site’s construction status.

Temperature in Washington, D.C.: 15° C
Weather: Mostly Clear
Concurrent Viewers of the Zoom and YouTube live stream, 84 and views on the PSW Science YouTube and Vimeo channels in the first two weeks of the lecture: 295.