The 2,463rd Meeting of the Society

Director of Basic Research
US Department of Defense

The modern American scientific enterprise was born out of the post-WWII system of federally funded research, first described by Vannevar Bush in his seminal report “Science, the Endless Frontier.” Absent a dedicated funding agency, the Office of Naval Research became a major funder of academic scientific research, supporting the growth of the modern university research system. Since then, the Department of Defense has maintained its place as the second largest federal funder of academic research and development.

While the National Science Foundation and other federal research agencies formed after WWII developed a peer-review funding model, the DoD has always functioned through a selection process moderated by program managers who are experts in their fields, and select funding targets to support the DoD’s research. This model results in decision making by individuals with both insights into DoD needs and a vision for the scientific community, leading to high-risk, high-reward investments in researchers who go on to define their fields. DoD has found that this approach engenders new avenues of inquiry, sustains existing ones, and informs the future scientific priorities of the US government in its entirety.

Even as the US was creating a new domestic scientific enterprise, the growth of American research helped found an open global scientific commons that persists to this day. Due to this ongoing international scientific collaboration and discourse, in part funded by the DoD, the US has been the global standard bearer in science and technology for the better part of the century. As other countries’ scientific enterprises become more competitive, both in terms of research outcomes and competition for scientific talent, however, the US is at risk of no longer being able to promote American scientific norms and values in the global commons.

This lecture will discuss DoD’s approaches to basic research funding, historically and at present. It will also discuss how DoD research funding programs inspire and support US global leadership in science and technology. 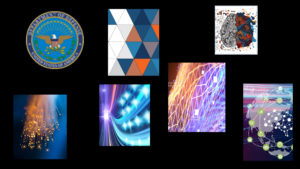 Bindu R. Nair is the Director of Basic Research within the Office of the Secretary of Defense (OSD). She is responsible for oversight and coordination of the Department’s $2.5 billion annual investment in basic science. This investment supports high risk and high pay-off basic research projects in many fields spanning the physical sciences, life sciences, environmental sciences, applied mathematics, to name a few, that probe the limits of today’s technologies and aim to discover new phenomena and develop the know‐how that may ultimately lead to future technologies.

Bindu previously served in a number of roles at DoD, including Acting Director and Deputy Director in the Human Performance, Training and Biosystems Directorate within the Office of the Secretary of Defense. In this role, she was involved in overseeing a broad range of DoD’s science and technology programs. Her specific areas of responsibilities in the office were in environmental technologies, bio-assist technologies (exoskeletons and prosthetics), human machine teaming, and social behavioral modeling in the information environment.

Before her assignment to OSD, Bindu worked for the Department of the Army with oversight responsibilities over the science and technology program in power and energy. She also worked in the DoD laboratory system at Natick Soldier Research, Development and Engineering Center as well as in private industry.

Bindu’s research expertise is in the field of Material Science and Engineering including nanomaterials, polymers, and organic electronic materials, and she has taught graduate level courses in Polymer Synthesis. Her publications are primarily in the membrane and materials development fields and she holds patents on fuel cell technologies.

Bindu earned a BSc at the University of Florida and a PhD in Materials Science and Engineering at MIT.

On September 23, 2022, from the Powell Auditorium of the Cosmos Club in Washington, D.C. streaming online via Zoom and the PSW Science YouTube channel, President Larry Millstein called the 2,463rd meeting of the Society to order. He announced the order of business and welcomed new members. The Director for Special Projects then read the minutes of the previous meeting.

President Millstein then introduced the speaker for the evening, Bindu Nair, Director of Basic Research at the U.S. Department of Defense. Her lecture was titled “The Endless Frontier: The DOD Basic Research Initiative.”

The speaker cited the 1945 book “Science, The Endless Frontier” by Vannevar Bush as the blueprint for modern government funding of basic scientific research. Bush advocated for basic science as the cornerstone to national security, health, and both economic and cultural progress. In 1946, the Office of Naval Research was founded and quickly became a major funder of academic scientific research. Today, the Department of Defense (DoD) is the second largest U.S. government funder of academic research and development.

DoD’s policy states that basic research is the “systematic study directed toward greater knowledge of understanding of the fundamental aspects of phenomena and of observable facts.” The speaker believes DoD is unique in the world as a non-civilian funder of research that does not require funded research to have a predictable application. By prioritizing understanding over application, the speaker said research results can answer previously unasked questions.

Unlike civilian-funded science, DoD does not rely on peer review. Because the agency is mission-driven, it relies on program managers who have the flexibility to use peer review as a tool. The speaker said DoD’s model allows seemingly wild ideas to germinate and potentially grow, that otherwise would fail in a traditional funding regime.

The speaker then discussed how DoD’s funding program compares to the National Science Foundation. But comparison, DoD disproportionally is the early funder of leading researchers. As an example, the speaker described how DoD was an early funder for the research of Deji Akinwande and his work on digital memory storage. The speaker said these results are evidence that the program manager model works.

DoD also provides sustained funding for researchers at later stages of their career. It’s largest single-investigator program is a 5-year fellowship with up to $3 million for research with potentially extraordinary outcomes. John Rogers received the fellowship in 2009, and developed a new field of bioelectronics.

The speaker described how program manager Tristan Nguyen is nurturing a new field of mathematics through Multidisciplinary University Research Initiative (MURI) awards and sponsoring international research. His funding management creates a MURI topic on homotope type theory aimed at reinventing type theory and devising computational methods for generating and validating mathematical proofs. Nguyen’s funding management has resulted in commercial applications and is the basis of a new DARPA program.

DoD funded ground penetrating radar. The speaker described how DoD funded the technology in the early 1990s for landmine detection and has since grown to applications across both military and civilian spheres. DoD has also sustained funding for quantum computing research for 20 years. The speaker explained that DoD’s funding was both early and disproportionate compared to other U.S. government agencies.

The speaker said keeping basic research independent is at the heart of DoD’s funding approach. She acknowledged the difficulty of maintaining that principle in the context of federal bureaucracy. Since 1985, DoD has prohibited restrictions on the conduct or reporting of fundamental research that is unclassified. That prohibition extends to restrictions on personnel and publications.

The speaker concluded her lecture with a discussion on the soft-power impacts of DoD’s basic research funding.


The speaker then answered questions from the in-person and online viewing audiences. One member asked via Zoom about whether DoD integrates funding with civilian philanthropy. The speaker said that while DoD should do better at communicating with civilian funders, it should not coordinate its funding and compromise its unique program manager model. An in person member asked the speaker about funding applied math. The speaker said the math community has recently asked for funding in exploratory math and that DoD is working on how to understand and fund that want.