The 2,465th Meeting of the Society

Exploration, Origins, & Physics of the Cosmos

The NASA Astrophysics Division is charged with three audacious goals. Understand how the universe works, by probing the origin and destiny of the universe, including the nature of black holes, dark energy, dark matter and gravity. Understand “how did we get here” by exploring the origin and evolution of the galaxies, stars and planets that make up the universe. Find out if “we are alone” by discovering and studying planets around other stars, and exploring whether they could harbor life.

Current operating missions of the Division include the Great Observatories; The James Webb Telescope, The Hubble Space Telescope, The Chandra X-ray Observatory and The Fermi Gamma-ray Space Telescope; Innovative Explorer Missions such as the Swift Observatory, and the NuSTAR, TESS, and IXPE missions; Missions of Opportunity such as NICER; and SOFIA. The Division also funds investigators involved in the missions of international partners, including ESA’s XMM-Newton.

These and other Astrophysics Divisions exploration missions have collectively contributed to a large proportion of humanity’s knowledge of the heavens.

The near future will be dominated by several new missions as well as operation and continuing scientific analysis of existing missions. New missions include work on ESA’s international Euclid mission to study the structure and formation of the universe, outflows from galaxy nuclei, and dark matter. A new Explorer Mission, COSI, will study the recent history of star birth, star death, and the formation of chemical elements in the Milky Way. A new Explorer Mission of Opportunity, GUSTO, will measure emissions from the interstellar medium to help scientists determine the life cycle of interstellar gas in our Milky Way, witness the formation and destruction of star-forming clouds, and understand the dynamics and gas flow in the vicinity of the center of our galaxy. And the
Nancy Grace Roman Space Telescope (WFIRST) will also be launched soon.

The lecture will discuss the goals of the Division, some of its current missions and their significant results, including results from The James Webb Space Telescope, and plans for future study of the universe. 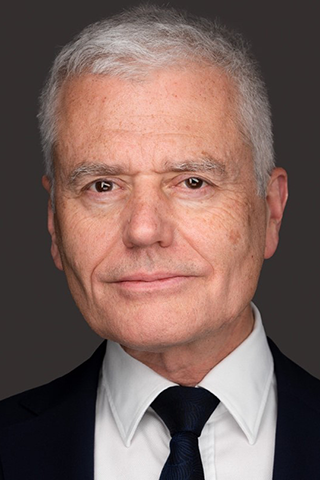 Until August 2022, Dr. Clampin was the Director of the Sciences and Exploration Directorate (SED) at the Goddard Space Flight Center (GSFC) where he led the Astrophysics, Solar System, Heliophysics and Earth Science Divisions, together with the high performance computing office.

At GSFC, he previously served as the James Webb Space Telescope (JWST) Observatory Project Scientist, and subsequently as Director of the Astrophysics Science Division and Deputy Director of SED. Prior to joining GSFC, Dr Clampin was the Advanced Camera for Surveys (ACS) Group Lead at the Space Telescope Science Institute (STScI), where he worked on the first four Hubble Space Telescope (HST) Servicing Missions. Dr. Clampin is a Co-Investigator with the Transiting Exoplanet Survey Satellite (TESS), and the Advanced camera for Surveys (ACS) science team and served as the Detector Scientist, responsible for the delivery of three focal plane camera systems. His research interests focus on studying the formation and evolution of planetary systems. Dr. Clampin has also designed ground-based telescope instruments including adaptive optics systems, coronagraphs and detectors.

Dr. Clampin graduated from the University of London with a BS in Physics and from the University of Saint Andrews in Scotland, with PhD in Astronomy. Dr. Clampin is the recipient of the Meritorious Presidential Rank Award, NASA’s Exceptional Achievement and Scientific Achievement Medals, and is a Fellow of SPIE and the Royal Astronomical Society,. Until recently he was the Chief Editor of the SPIE peer-reviewed Journal of Astronomical Telescopes, Instruments and Systems, a position he held for 7 years. He is married with one daughter, and enjoys running and his lifelong passion scuba diving.

On October 21, 2022, from the Powell Auditorium of the Cosmos Club in Washington, D.C. streaming online via Zoom and the PSW Science YouTube channel, President Larry Millstein called the 2,465th meeting of the Society to order. He announced the order of business and welcomed new members. A member then read the minutes of the previous meeting.

President Millstein then introduced the speaker for the evening, Mark Clampin, Director of the Astrophysics Division within the Science Mission Directorate at NASA Headquarters. His lecture was titled, “NASA Astrophysics: Exploration, Origins, and Physics of the Cosmos.”

Clampin spoke about the space missions that NASA’s Astrophysics Division builds and flies, and the science goals for those missions. Those missions generally aim to learn how the universe works, explore its origins and evolution, and to search for life on other planets.

NASA’s astrophysics program is structured around the National Academy of Sciences decadal surveys, which recommend priorities for science observations. The surveys generally recommend a balanced portfolio of small to large missions, and each decade they recommend a flagship mission.

In 2001, the survey recommended building a large infrared space telescope that would become the James Webb Space Telescope that launched December 25, 2021. While other infrared telescopes are cooled with liquid helium, using that cooling process would limit the Webb’s usable life. Instead, Webb employs an array of membranes that constantly shade the telescope and prevent the sun from warming it.

In July, NASA released Webb’s first deep field image. Clampin said Webb’s image “begins where Hubble leaves off,” observing wavelengths as small as five microns. Clampin examined the image for the viewing audience, highlighting galaxies acting as gravity lenses to reveal globular star clusters that may have been created as early as 500 million years after the Big Bang.

The speaker then described Webb’s search for exoplanets, by observing transits in front of stars that dim their observable light and allow scientists to gather data about exoplanet atmospheres.

In 2010, the decadal survey recommended the next large observatory facility that is now being called the Roman Space Telescope. At 2.5 meters, the telescope will be the same size as Hubble, but it will have the same powerful infrared detectors as Webb. Roman will have 100 times the focal plane of Hubble, to conduct infrared surveys to facilitate research into the nature of dark matter and perform an exoplanet census. Clampin then used animations to explain how Roman will study baryonic oscillations, supernovae, and detect gravitationally lensed exoplanets. Roman is scheduled to launch in 2027.

The speaker then discussed time domain and multi-messenger astronomy, which the 2021 decadal survey identified as an important area in astrophysics. It studies transient events in the universe using different kinds of measurements or messengers. One such messenger is gravitational wave astronomy, allowing scientists to see objects from the very early universe, understand pulsars, and see what happens when stellar mass objects collide. Clampin then described a 2017 observation of a massive collision, which scientists detected via gravitational waves, x-rays and gamma rays, and optical light. He said this observation caused a “sea change” in the understanding of how heavy elements were produced in the universe.

There are approximately 5,000 confirmed exoplanets and 9,000 identified candidates. Most were detected by NASA’s TESS and Kepler missions.
The Webb telescope has now begun studying the atmospheres of those exoplanets for evidence of life. NASA’s next objective will be to directly image an exoplanet.

The speaker concluded by describing several of the mid-class and smaller explorer missions in the Astrophysics Division mission portfolio.

The speaker then answered questions from the in-person and online viewing audience.

Temperature in Washington, D.C.: 17° C
Weather: Clear
Attendance: 58 in-person and 43 streaming for a total of 101 live viewers and 491 online viewers in the first two weeks of posting.