The 2,468th Meeting of the Society

The Latest on the Great Dinosaur Extinction 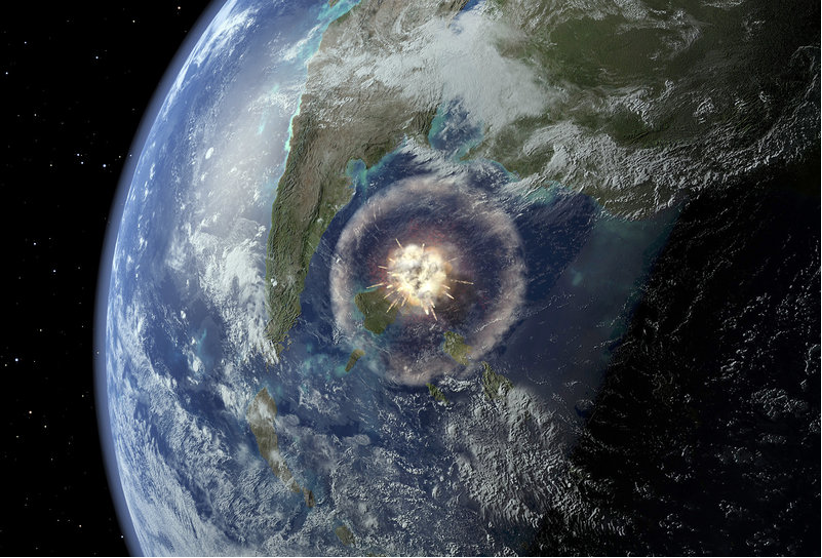 The most recent of Earth’s five largest mass extinction events occurred 66 million years ago, coeval with the impact of an asteroid roughly 12 kilometers in diameter impacting the earth at approximately 60 degrees. The impact produced the Chicxulub crater, approximately 200 kilometers wide, in what today is the Yucatan Peninsula in Mexico. This impact, by some estimations, caused the extinction of 75% of life on Earth at the genus level, including all non-avian dinosaurs. Proposed kill mechanisms include thermal effects, dust, soot, and sulfate aerosols reducing Earth’s solar insolation.

In 2016, 835 meters of core was recovered from the Chicxulub impact structure through International Ocean Discovery Program-International scientific Continental Drilling Program Expedition 364. Analyses of the cores, downhole logs, and geophysical site survey data have led to a series of advances in our understanding of impact cratering processes, how the Chicxulub impact affected the Earth’s environment leading to the Cretaceous-Paleogene mass extinction, and what ecosystems existed within the newly formed crater.

Key areas of discovery from this work include: (1) clear evidence for the origin of peak rings and crater dynamics in large impacts; (2) highest resolution record to date of impact processes within the crater including deposition of impactites and role of ocean resurgel; (3) rapid recovery of life at ground zero with a key niche being filled by cyanobacteria; and (4) development of a long lived hydrothermal system with astrobiological implications.

The lecture will discuss these findings and their implications for the great extinction and for the origins of life on earth and possibly elsewhere. 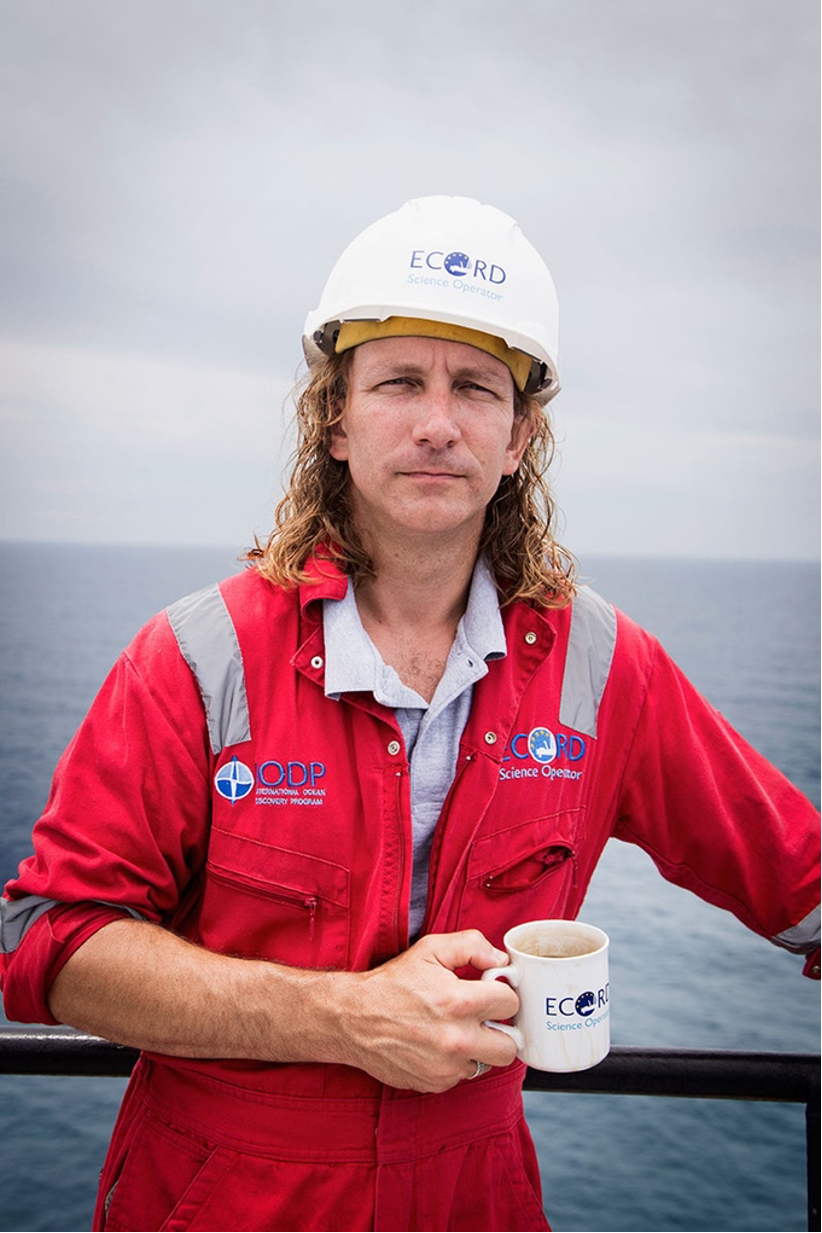 Sean Gulick is Research Professor in the Institute for Geophysics, Associate Chair of the Department of Geological Sciences, and Co-Director of the Center for Planetary Systems Habitability in the Jackson School of Geosciences at the University of Texas at Austin.

Sean and his group use geophysical techniques to understand Earth and planetary processes. Current projects relate to the study of tectonic and climate interactions in glaciated continental margins from Antarctica to Greenland to Alaska; geohazards and margin evolution in Alaska, New Zealand, and Haiti, and geologic processes and environmental effects of the Cretaceous-Paleogene Chicxulub meteor impact.

Sean has been on over 30 research cruises using geophysical data and scientific ocean drilling to test hypotheses ranging from how subduction zones are initiated, to roles of sediment flux in glaciated margins, to incised river valleys as preservers of sea level history and sand resources, to impact cratering processes and their links to life.

Sean earned a BS in Geology with a Minor in Marine Sciences at the University of North Carolina, Chapel Hill and a PhD in Geological Sciences at Lehigh University in Pennsylvania.

On December 2, 2022, from the Powell Auditorium of the Cosmos Club in Washington, D.C, and by Zoom webinar broadcast on the PSW Science YouTube channel, President Larry Millstein called the 2,468th meeting of the Society to order at 8:02 p.m. ET. He welcomed new members, and the recording secretary read the minutes of the previous meeting.

President Millstein then introduced the speaker for the evening, Sean Gulick, a research professor at the University of Texas Institute for Geophysics. His lecture was titled, “The Latest on the Great Dinosaur Extinction.”

Gulick began his talk by expressing gratitude for being invited to discuss the Cretaceous Paleogene Extinction event, which he argues is the most important event in the last 100 million years because 75% of life went extinct, including pterodactyls and the T-rex.

Gulick then introduced impact events, highlighted the heavy bombardment period, and told a story about a father and son who wrote a paper in 1980 which claimed a 12 km wide asteroid hit the earth and caused an extinction event 66 million years ago based on an iridium spike in Italian limestone formations.

The speaker goes on to explain evidence which confirms this claim.

The Chicxulub (“Chicksa-loob”) impact crater, a roughly 200km across crater at the edge of the Yucatan peninsula provided a means to understand impact cratering processes. The seismic profile of the crater and 3-dimensioankl modeling shows directionality and angle of impact, the worst combination, Gulick admits, for the survival of the dinosaurs.

The speaker then explained that the International Ocean Discovery Program went on Expedition 364 in order to understand impacts, their environmental impact, and how they affect habitats.

The expedition collected sediment over 3 months and the sediment was sent to 4 labs. The same iridium anomaly found in Italy was determined to exist in this crater, correlating the extinction event and provided a time stamp. Gulick notes that by definition the Cretaceous period ended the moment this asteroid struck. He then discussed the layers of rock they identified through analysis of their collection. One layer, the speaker highlights, was made of a melted rock which could only occur under a pressure on the scale of 60 giga-pascals, or 10 billion times the energy of Hiroshima.

Grulick then briefly notes how this research is related to human exploration through space. Namely, the sampling of peak rings actually means sampling the lower crust of bodies like the moon.

Expedition 364 confirmed that impacts cause target rocks to flow and resurface planets. The collaboration determined that the extinction likely occurred due to transmission of sediment through the atmosphere. Specifically, the impact caused volatiles to permeate the atmosphere, including 300 gigatons of sulfur and about 400 gigatons of carbon dioxide, likely causing sub-zero temperatures to span 10-15 years. This impact winter prevented photosynthesis, reduced food supply, and caused starvation. This starvation was the dominant cause of extinction.

Grulick explains that this impact caused surface extinction, however the organisms on the seafloor continued to thrive on ocean dwelling algae.

The speaker then compares the amount of sulfur and CO2 released form the impact to the amount humans generate. Humans generate a comparable of CO2 approximately every 4 years, however, humans have in total generated orders of magnitude less sulfur than the impact.

The third objective for Expedition 364 led to the analysis of the peak ring using geophysical data to identify the velocity of sound through the rock as a way to probe habitats. The team found that thermophilic life favored the environment produced by the impact for around 10 million years.

In fact, astrobiologist on Expedition 364 analyzed the cores of the samples taken and identified living cells and extracted DNA from multiple layers demonstrating active thermophilic life which likely successors from the ecosystem generated by the impact.

Theaker concludes by noting that impacts are a driver of life and ubiquitous in the universe.

Next the question and answer period began. One of the members asked about the homogeneity of the particles in the atmosphere as a result of the impact. The speaker explained that the climatic change was global, but the local refugia was inhomogeneous. Everything later than ~60 pounds went extinct, so even if there were refugia they were not large enough for larger species to survive.

Another member asked about the effects of a similar sized asteroid hitting the land area of Earth today. The speaker highlighted that if Chicxulub hit either the pacific or Atlantic ocean than the event would have largely caused a water vapor event and not cause such a large extinction event. When considering a land impact, a similar consideration of volatile rich impact region must be considered. Humans would only be wiped out if there was a large enough of a climate event created.

Temperature in Washington, D.C.: 8° C
Weather: Partly Cloudy
Number of in person attendees and streaming online viewers: 118, and views on the PSW Science YouTube and Vimeo channels in the first two weeks of the lecture: 584.