The 2,395th Meeting of the Society

The Science of Ballooning During the Civil War

Joseph Henry was the first director of the Smithsonian Institution and the founder and first president of PSW. He was one of the most important American scientists of his time, and widely regarded as the most important since Ben Franklin. Henry was fascinated by weather and weather prediction, and he had an early appreciation of the potential of aeronautics for studying the atmosphere, and for understanding the weather. The balloon was then becoming a platform for scientific investigation, allowing atmospheric measurements up to an altitude of 30,000 feet. Another passion of Henry’s was studying electricity and magnetism, and his pioneering work on electrical induction led to the invention of the telegraph, in which he played a direct role. The unit of induction today is named the Henry, in his honor, in recognition of his work in this area.

These two interests came together dramatically at the start of the Civil War. Under Henry’s guidance aeronaut Thaddeus Lowe distinguished himself on the National Mall by sending a telegram to President Lincoln from an altitude of 500 feet, reporting the clear view he had of Virginia and of the Confederate lines of defense some miles away. The ability to see the disposition of the Confederate forces from afar demonstrated in a compelling way the potential military uses of balloon observations, and Henry and Lowe worked together to convince Lincoln that a balloon could contribute to the Union Army’s efforts to gather actionable intelligence. They were successful, and at President Lincoln’s insistence, the Union Army established a Balloon Corps, appointing Lowe its Chief Aeronaut.

Once operational, the Balloon Corps grew to seven specially constructed government balloons, 12 portable hydrogen gas generators, and a first of its kind flat-top aircraft carrier, requiring Lowe to hire many aeronauts. As a visible alarm system, Lincoln’s Air Force calmed public fears of Confederate troops invading Washington. It was the nation’s first Air Force. Lowe’s Balloon Corps eventually flew more than 3,000 times, and was in the air during many battles in 1862 and 1863. It was disbanded, despite its successes, just before the battle of Gettysburg. 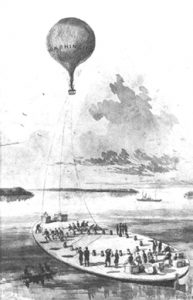 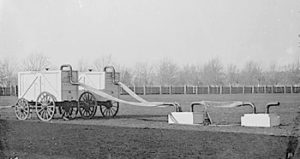 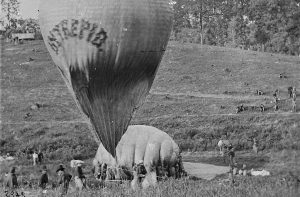 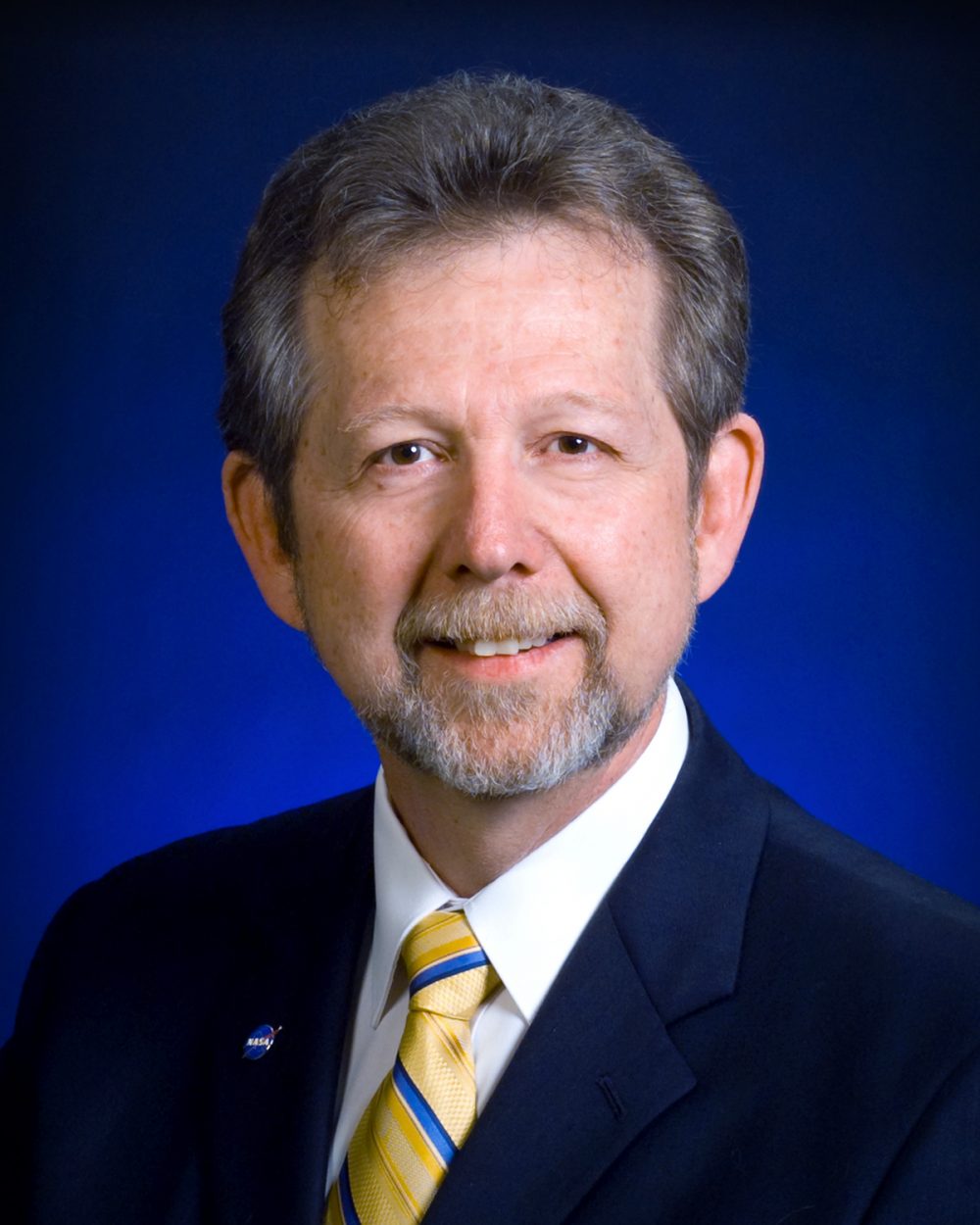 James L. Green is the Chief Scientist at NASA. Previously, he was Director of the Planetary Science Division at NASA. During his tenure he oversaw many seminal missions, recently including the landing of the Curiosity rover on Mars and the flyby of Pluto and its moons by the New Horizons spacecraft. Before that he was Chief of the Space Science Data Operations Office, Head of National Space Science Data Center, and Deputy Project Scientist on the IMAGE mission. He has been at NASA since 1980.

In addition to his long involvement with NASA, Jim has had a passionate interest in the history of the Civil War and ballooning in particular. He has conducted research on Civil War balloons and ballooning for more than 25 years. He often speaks on the subject, and he has worked with the Civil War Trust to identify balloon stations used in the Peninsula Campaign to ensure their preservation.

Jim has written over 100 scientific articles on the Earth’s and Jupiter’s magnetospheres, and over 50 technical articles on data systems and networks. Among numerous awards and honors, Jim received the Flemming award for outstanding individual performance in the Federal government, Japan’s Kotani Prize, and the NASA Exceptional Achievement Medal for the New Horizons flyby of Pluto.

Jim earned his PhD in Space Physics at the University of Iowa.

On September 7, 2018, President Larry Millstein called the 2,395th meeting of the Society to order at 8:01 p.m. in the John Wesley Powell Auditorium of the Cosmos Club in Washington, D.C. He announced the order of business, that the evening’s lecture would be livestreamed on the internet, and welcomed new members to the Society. The minutes of the previous meeting were then read and approved.

President Millstein then introduced the speaker for the evening, James L. Green, Chief Scientist at NASA and a Civil War historian. His lecture was titled “Aeronautical Beginnings: The Science of Ballooning During the Civil War.”

In the first half of the nineteenth century, ballooning technology in the United States conducted atmospheric research. PSW founder Joseph Henry was amongst those most interested in receiving and analyzing atmospheric measurements.

By the end of the 1850s, aeronauts were setting distance records in balloons filled with illumination gas distilled from peat. In 1859, John Wise and John LaMountain wagered they could balloon across the Atlantic Ocean before the telegraph was able to connect North America and Europe. Unfortunately, their balloon was destroyed during a test flight.

Around that time, Thaddeus Lowe was working to construct a 725,000 cubic foot balloon that could lift 22 tons. However, the gasworks in New York City were inadequate to fill the balloon. In early 1861, Lowe sought Henry’s guidance and set to work on a smaller balloon to prove his design principles.

On April 12, 1861, war broke out. At the same time, James Allen joined the 1st Regiment out of Rhode Island under Maj. Gen. Ambrose Burnside, and brought his own balloons to the regiment. In the following months, Allen conducted stationary assents in Virginia for reconnaissance purposes.

On June 18, 1861, at Henry’s invitation, Thaddeus Lowe demonstrated ballooning for President Lincoln. Lowe conducted a tethered assent on the National Mall where the Air & Space Museum is now located. From his balloon 500 feet in the air, Lowe telegraphed a message to the President, which Green calls “the first message from space.”

That same month, Gen. Benjamin Butler invited John LaMountain to balloon at Fortress Monroe in Virginia, where he successfully observed Confederate positions from tethers to land and to the U.S.S. Fanny. At the same time, the Union Army’s topographical engineers called John Wise to service in time for the first battle of Bull Run. Unfortunately, an inexperienced ground crew popped Wise’s balloon on its way to the front.

At the President’s insistence, the Union Army subsequently established a Balloon Corps, for which Lowe was appointed Chief Aeronaut. Lowe’s first order of business was to construct a total seven new balloons, in four different sizes, for which Lowe hired Allen, LaMountain, and additional other aeronauts into the Balloon Corps. Lowe then designed and constructed mobile gas generators to inflate balloons with hydrogen gas, which were able to remain inflated for several weeks. Further, inspired LaMountain’s use of the U.S.S. Fanny, Lowe converted a coal barge named the George Washington Parke Custis into a floating flat-top balloon tether that deployed to the Potomac River to observe Confederate forces on the Virginia shore and inland.

Lowe’s Balloon Corps eventually flew more than 3,000 times. Its duties included distribution around the City of Washington, using cadmium lights at night to maintain constant surveillance. In 1862, the Balloon Corps was also deployed during the Peninsula Campaign, which began in Hampton Roads, Virginia, after the ironclad duel between the U.S.S. Monitor and the C.S.S. Virginia, formerly the Merrimac.

Gen. George McClellan intended to land 90,000 Union troops on the peninsula between the York River and the James River. But the Virginia posed a threat to that plan. The Balloon Corps thus deployed at Fortress Monroe to observe the waterways for any sign of the Virginia, which never appeared.

The Balloon Corps then stayed with McClellan’s campaign and were deployed and provided valuable aerial intelligence at the Siege of Yorktown, the Battle of Fair Oaks, the Battle of Gaines’ Mill, and during McClellan’s evacuation from the peninsula.

Gen. Burnside subsequently deployed the Balloon Corps at the Battle of Fredericksburg. But, Green said, Burnside erred by sending inexperienced aids rather than aeronauts into balloons, and failed to make use of their intelligence during the battle. Gen. Joseph Hooker also deployed the Corps during the Battle of Chancellorsville in 1863, but also failed to ensure stable lines of communication to use aerial intelligence.

Lowe departed the Corps after Chancellorsville, and according to Green, administration of Balloon Corps fell apart. The Army placed the Corps’s balloons in storage until April 1864, when the Army sold six of the balloons and other Corps equipment at public auction. Henry arranged for Lowe to obtain the seventh balloon as a settlement of his accounts with the Army.

President Millstein then invited questions from the audience. One member asked whether any Corps balloons had any hydrogen-related accidents. Green said the Corps took many fire-related precautions, and that although the balloons were regularly hit with gunfire, the only accident in a manned balloon was a large tear caused by extreme weather. A guest why the Corps was always deployed near water. Green said that fast moving water was required to cool the hydrogen gas coming out of Lowe’s mobile generators to fill the balloons.