The 2,258th Meeting of the Society

Air Quality in the Anthropocene Era

Chemistry Nobel Laureate Paul Crutzen has coined the term “anthropocene” to put the modern industrial era in the geological context to highlight the fact that human-induced changes to the earth are in some cases as large as the changes that occurred in geological times. Though the changes in the terra firma and the biosphere are the most visible manifestations of these changes, the quality of our life-sustaining atmosphere is also changing rapidly. Air quality is affected not only by the “bad air” that we can smell or feel in our lungs but also by the rate of change in the composition of the “good air” that has made life on this planet possible. The composition of the good air has been changing too rapidly recently for the life to adapt to it. The most well known of these changes has been the rapid thinning of the ozone layer in the polar regions, popularly known as the Ozone Hole. This lecture will illustrate what constitutes good and bad air using images derived from modern satellite instruments. The author will discuss combining data from remote sensing and in-situ instruments with numerical models. 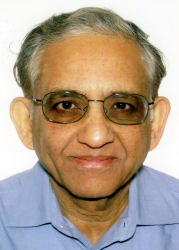 PAWAN K. (PK) BHARTIA is a Senior Staff Scientist in the Laboratory for Atmospheres at NASA Goddard Space Flight Center (GSFC). He currently serves as the US Science Team Leader of the Ozone Monitoring Instrument (OMI). OMI is a Dutch-Finnish built instrument currently flying on NASA’s EOS Aura satellite. He has written over 100 scientific papers on ultraviolet remote sensing of the Earth’s atmosphere. He was a leading member of the Ozone Processing Team (OPT) that was responsible for producing ozone products from the SBUV and TOMS instrument on NASA’s Nimbus-7 satellite that was launched in September, 1978. Shortly after the discovery by two British scientists that the ozone layer over a station in Antarctica was rapidly thinning, Dr. Bhartia presented the first scientific paper that showed that the phenomena, which subsequently came to be known as the “ozone hole,” covered almost the entire continent of Antarctica. He also pioneered the development of a technique to make precise estimates of the ultraviolet radiation that reaches the Earth’s surface using satellite data. His current research interest is in measuring atmospheric pollution from space that affects human health and global air quality. He and his colleagues are working on developing techniques to measure the constituents of the urban smog from space, and in tracking inter-continental transport of these pollutants. He received his Ph.D. in Physics and MS in Computer Science degrees in 1977 from Purdue University, West Lafayette, Indiana. Before joining NASA in 1991 he worked for various aerospace companies in both technical and managerial positions. He served as the Head of the Atmospheric Chemistry & Dynamics Branch at NASA GSFC from 1993-2006. He is the recipient of William Nordberg Medal and Exceptional Scientific Achievement award from NASA Goddard Space Flight Center and Outstanding Leadership Medal from NASA. The TOMS project that he has led since 1991 received the 2006 William T Pecora group award given jointly by NASA and USGS.

President Larry Millstein called the 2,258th meeting to order at 8:23 pm October 16, 2009 in the Powell Auditorium of the Cosmos Club after one of those awkward struggles with the hardware. The computer seemed to want to put two images on the screen, neither of them in a useful location. The minutes of the 2,257th meeting were read and approved.

Mr. Bhartia spoke of his fondness for the word “anthropocene”. It was coined in 2000 by Paul Crutzen to refer to the influence of human behavior on the earth. The anthropocene era has no precise beginning, but the invention of the steam engine in the late 1700's is a usable reference. Mr. Bhartia’s concern is about the pollutants that he believes are affecting our health in a radical way.

He said the primary pollutants are ozone and particulate matter. Other pollutants are sulfur dioxide, nitrogen oxides, carbon monoxide, and volatile organic compounds, carbon dioxide, the chloroflourocarbons, and trioxygen, or ozone.

He finds ozone particularly interesting. At 20 km altitude, it protects life. At 10 km, it causes global warming. At 5 km, it cleans the atmosphere. Near the surface, it causes smog. Location is everything. For all its problems, life would not exist without it, he said.

He gave credit to Donald Heath and Arlinn Krueger, who started, for curiosity, studying ultraviolet light about that same time. Only now, 49 years later, is it clear how important ozone is in blocking ultraviolet light. Mr. Bhartia displayed a graph that showed that practically no light with a wave length less than 310 nm reaches the surface of the earth.

He discussed the “ozone hole,” the sharp decrease in ozone near the South Pole discovered in 1985. In the early ‘80's, models were predicting a 1% change a decade. The discovery of the ozone hole changed thinking about ozone and caused people to figure out that a surface chemistry process facilitated by ice crystals and involving chlorofluorocarbons in the atmosphere was destroying ozone. The isolation of the air in the Antarctic polar vortex concentrates the phenomenon there. Use of some chlorofluorocarbons was all but banned in the 1990's. The largest ozone hole to date was observed in 2006. The ozone hole is expected to remain at approximately the current state for about 10 years and then gradually revert to approximately the pre-chlorofluorocarbon level in about 50 years.

Mr. Bhartia showed a number of graphs of what researchers believe would have happened had chlorofluorocarbons remained in common use. Ozone worldwide in the atmosphere would have been reduced to less than 1/3 current density by about 2060. The UV index would have begun to climb about 2010, climb sharply after 2020, and triple by about 2060. Lower stratosphere ozone would have held fairly constant until about 2050 and then fallen steeply, to far less than 1/3 current density by 2060.

What did we learn from this, Mr. Bhartia asked? That our ability to predict the future is limited. That there are always various scientific opinions, equally valid ones, that range from best case to worst case. That the earth system science is complex and it is impossible to predict “tipping points.” That it is irresponsible to base public policy on the best case scenarios and ignore the worst.

The speaker described several methods of collecting environmental data by satellite, including the Afternoon Constellation, sometimes called the “A-Train.” This is a set of seven satellites some U.S. and some international, that fly within 30 minutes of each other and collect coordinated data.

He showed a series of pictures of the earth, enhanced to illustrate environmental effects. They showed ozone, nitrous oxides, particulate matter, aerosols, and sulfur dioxide. The largest anthropocene era feature that can be seen by naked eye from space, he said, is the cloud of particulate matter over Eastern India that blows into the Bay of Bengal.

He showed a series of graphs illustrating sulfur emissions. These come steadily from copper smelters and sporadically from volcanos. Some smelters have been improved and at least one has been decommissioned.

In the Anthropocene era, he said, the earth is rapidly becoming a global village. Dust from Mongolian deserts reaches the U.S. Smoke from the U.S. reaches Mexico. Ozone gets distributed worldwide.

He closed with three quotes purportedly from Seattle, Chief of the Suquamish and Duwamish tribes in the mid to late 19th century:

- Whatever befalls the Earth; befalls the sons of the Earth.
- Man did not weave the web of life; he is merely a strand in it.
- Whatever he does to the web; he does to himself.
The first question was about the ozone hole. Mr. Bhartia explained that the process that produced the ozone hole was a surface chemistry process. It can’t take place in the gas phase, it requires ice crystals high in the atmosphere, such as in Antarctica.

“What is role of soot?” someone asked. It is very important. It causes warming high in the atmosphere and cooling below. Much of it comes from burning fossil fuels.

Mr. Millstein thanked our speaker and presented a plaque commemorating the occasion. He announce the next meeting and made several housekeeping announcements, including the parking announcement. He encouraged people to join, noting that dues provide half the Society’s budget.