The 2,267th Meeting of the Society

The James Webb Space Telescope, named after NASA’s Administrator under President Kennedy, will extend the scientific discoveries of the Hubble Space Telescope using a gigantic 21-foot deployable mirror. Built by an international partnership led by NASA with major contributions from Europe and Canada, to be launched in 2014 on the European Ariane 5 rocket, and traveling a million miles from Earth to the Sun-Earth Lagrange point L2, the JWST will observe wavelengths from 0.6 to 28 microns. It will see farther back in time, closer to the Big Bang, to learn about the first stars and galaxies, and it will examine cold dust clouds where stars and planets are being born today. With luck, it will tell us about the formation of life-supporting planets like Earth. this lecture will outline the history of the project, the main engineering breakthroughs it required, and the strategy for scientific investigation. Ultimately, the JWST will help answer the questions: How did we get here? Are we alone? 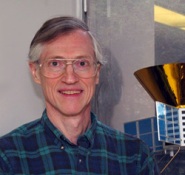 DR. JOHN C. MATHER is a Senior Astrophysicist in the Observational Cosmology Laboratory at NASA’s Goddard Space Flight Center. His research centers on infrared astronomy and cosmology. As an NRC postdoctoral fellow at the Goddard Institute for Space Studies (New York City), he led the proposal efforts for the Cosmic Background Explorer (74-76), and came to GSFC to be the Study Scientist (76-88), Project Scientist (88-98), and the Principal Investigator for the Far IR Absolute Spectrophotometer (FIRAS) on COBE. He showed that the cosmic microwave background radiation has a blackbody spectrum within 50 parts per million, confirming the Big Bang theory to extraordinary accuracy. As Senior Project Scientist (95-present) for the James Webb Space Telescope, he leads the science team, and represents scientific interests within the project management. He is the recipient of many awards, including most recently the Nobel Prize in Physics (2006) with George Smoot, for the COBE work.

President Robin Taylor called the 2,267th meeting to order at 8:17 pm March 19, 2010 in the Powell Auditorium of the Cosmos Club. Ms. Taylor announced that 23 members have joined in the past two months. She announced the CapSci event of the Washington Academy of Sciences, at which four Society members were to speak.

The minutes of the 2,266th meeting were read and approved.

They name telescopes after heroes, and in this case their hero was James Webb, the first Administrator of the National Aeronautics and Space Administration. Mr. Webb organized NASA to go to the moon. He worked with John Kennedy to make the plan and work out the budget. He once doubled the budget in a taxicab on the way to meet with Mr. Kennedy. There are many great stories about him, as with many heroes.

To study the universe, you have to measure it. There are several ways. As the ancient Greeks knew, you can triangulate. Those clever Greeks estimated the size of the earth and the distance to the moon by triangulation. They tried to do the same with the sun, but it was too far.

There is also a standard candle approach. If two candles are equally bright, the one that looks dimmer is farther away. The inverse square law is used to determine the distance the brightness.

Fred Hoyle, in a radio debate, derided this theory about the sudden beginning by calling it the Big Bang. The name stuck, and, worse for Mr. Hoyle, became respectable. Another philosopher, the author of the comic strip, Calvin and Hobbs, gave it another name, the “Horrendous Space Kablooey.” Considering what we suppose went on there, Mr. Mather finds merit in this name.

He told of the history of the universe as determined by COBE (Cosmic Background Explorer) and WMAP (Wilkinson Microwave Anisotropy Probe). Immediately after the Horrendous Space Kablooey, there followed an exponential expansion, primordial fluctuations, matter and antimatter, dark matter, and dark energy. This happened 13.75 billion years ago, +/- 0.11 billion years. Then antimatter disappeared. After about 3 minutes, helium nuclei formed. After about 200 million years, the first stars formed. Galaxies formed, he guesses, from the accumulation of parts.

Then, about five billion years ago, the expanding universe began to accelerate. We say that this is due to dark energy. That means we don’t have a clue why it is happening. It was a big surprise when it was discovered, about 12 years ago.

Another part of the question, “How did we get here?” is the history of the solar system. About 4.567 billion years ago, the sun and the first solid bodies of the solar system formed. About 90 million years after the formation, a body the size of Mars, called “Theia,” hit the earth and blasted a lot of debris off. That, they believe, formed the moon. The craters on the moon indicate there was a period when rocks fell from the sky often.

There was a period, apparently, when the orbits were unstable. Jupiter and Saturn switched orbits twice. This cleared the solar system of debris. The Earth cooled, possibly with water, but we don’t know why water appeared.

Here are some of the big mysteries left:

why is there matter and no antimatter?
what is dark matter?
what is dark energy?
was Einstein right about relativity? Is it true that we cannot travel faster than light?
how did we get here, how did life start?
are there other planets that could support life?
what happens next?
Astronomers can work on those problems up to the formation of life. That they leave to others. Astronomers faced with questions of any kind usually turn to a telescope.

So Mr. Mather was pleased to get a call one day, from someone saying, “It’s time to start building a new telescope. Can you send us a proposal tomorrow?”

Fortunately, he had been thinking along those lines already, and he did send a proposal the next day. It was designed to see the end of the dark ages in space, the formation of the first light and the reionization of matter, the assembly of galaxies, the birth of stars and proto-planetary systems, and the development of planetary systems.

What does it need to do? It needs to read infrared light, because of the redshift of the expanding universe. It needs to be in space, because little infrared reaches earth. So the Webb Telescope will orbit the sun and earth at Lagrange point L2, where it is permanently in the shade. It has an umbrella the size of a tennis court. It operates at about 40K.

A lot of stuff has been and is being done to get it ready for 2014, when it will launched on an Ariane 5 rocket from French Guiana. A model has been built by Northrop Grumman and has toured in places like Washington, DC, Munich, and Ireland. There is a test facility in Houston that takes the mirror elements down to around 40K to test them. They are experimenting now with a 1/6 scale model, to work out all the adjustment procedures.

The Webb is bigger than Defense Department scopes. Mr. Mather did seem to enjoy the envy. He speculated that, when the Webb has done its work, others will want to build even bigger scopes for such purposes at getting closer looks at planets that appear to be habitable. He’s looking forward to looking at dwarf galaxies with dark matter – we presume they have dark matter, otherwise they would have disintegrated. He expects to learn more about how galaxies evolve, where and when the Hubble Sequence formed, what’s up with those gamma ray bursts, how stars and planets form, many other questions. Perhaps the greatest interest is in planets. Nearly 400 planets have now been found. They expect to find many times that number.

The Webb Telescope is being built by a partnership of Canada, Europe, and the United States. The guidance center is coming from Canada. It will be launched on a European Ariane rocket from French Guiana.

Mr. Mather closed by inviting everyone to look to the web site for further information. He also revisited the controversy about the demotion of Pluto. He showed a picture of 11 dwarf planets, one of them actually bigger than Pluto. There may be thousands of orbiting objects the size of Pluto.

The first question was, how hard would it be to put up an array of radiotelescopes in space? Pretty hard, but it has been started. There are two telescopes out there now. At that, someone volunteered that the man sitting next to him, Tom McCaskill, is the only person who has designed an array of satellites in space. Mr. McCaskill is the man who positioned the satellites of the Global Positioning System, which enables millions of earthlings to determine their position on earth.

Another question was: What’s the wave length of the Webb Telescope? Twenty six to 28 microns.

Another person asked about the device that does the splitting of wave lengths. It’s called a dichromic filter, Mr. Mather said. Those are made by covering a sheet of material with layers of different materials.

Someone asked why beryllium was chosen for the mirrors. It maintains shape as it cools. It is nasty stuff; it’s toxic, and it requires very careful handling, but its advantages for mirror precision were compelling.

What will limit the life of the telescope? The fuel, probably. The satellite will have to be balanced on point, and the force of the solar radiation has to be balanced.

What about cosmic ray damage? Again, they are building it carefully. Will the instrument be repairable? No, not that we know of. We can’t figure a way to get there and service it. There’s no present plan for refueling it.

In response to another question, he said there are more infrared stars than visible stars. Infrared stars are only about 2000 - 2500 degrees, not hot enough to produce real light.

After the talk, Ms. Taylor presented a plaque commemorating the occasion. She announced the publication of a book by Society member Stephen Dick. She made the usual housekeeping announcements. She announced the following meeting. Finally, at 9:35 pm, she adjourned the 2,167th meeting to the social hour.