The 2,305th Meeting of the Society

Grasping the Molecules of Life

Biology has become accessible to an understanding of processes that span from atom to organism. As such we now have the opportunity to build a spatio-temporal picture of living systems at the molecular level. Recent work in my laboratory addresses some of the issues that we confront in our attempts to create, interact with, and communicate physical representations of complex molecular environments. In this talk I will discuss and demonstrate three levels of interaction with protein interactions: 1) human perceptual and cognitive interaction with complex structural information; 2) interaction and integration of multi-scale data sources to construct cellular environments at the molecular level; and 3) interaction of software tools that can bridge the disparate disciplines needed to explore, analyze and communicate the emergent holistic molecular view of living systems. In order to increase the understanding and interaction with complex molecular structural information we have combined two evolving computational technologies: computer autofabrication, known as solid printing and augmented reality, the technology that combines real-world object with computer generated information. We create tangible models utilizing computer autofabrication. Each molecular model can be custom made, with an ease similar to that of printing an image on a piece of paper. Augmented reality is used to combine computer-generated information with the physical models in the same perceptual space. By real-time video tracking of the models as they are manipulated we can superimpose text and graphics onto the models to enhance the information content and drive interactive computation. We have recently developed automated technologies to construct the crowded molecular environment of living cells from structural information at multiple levels. We can populate cytoplasm, membranes, organelles and multi-protein complexes within the same structural volume, resulting in three-dimensional representations of cellular environments that synthesize our current best knowledge of such systems, and which can become “community models” that evolve with new information and knowledge. The communication of such complex structural information requires both extensive scientific knowledge as well as expertise in creating clear visualizations and interactive environments. To this end we have developed a method of combining our existing molecular modeling environment with several professional “Hollywood” grade 3D modeling and animation programs. This gives both molecular scientists and professional scientific illustrators access to the best capabilities of both the science and art of molecular communication. In doing so it brings new, expanded capabilities to both communities. 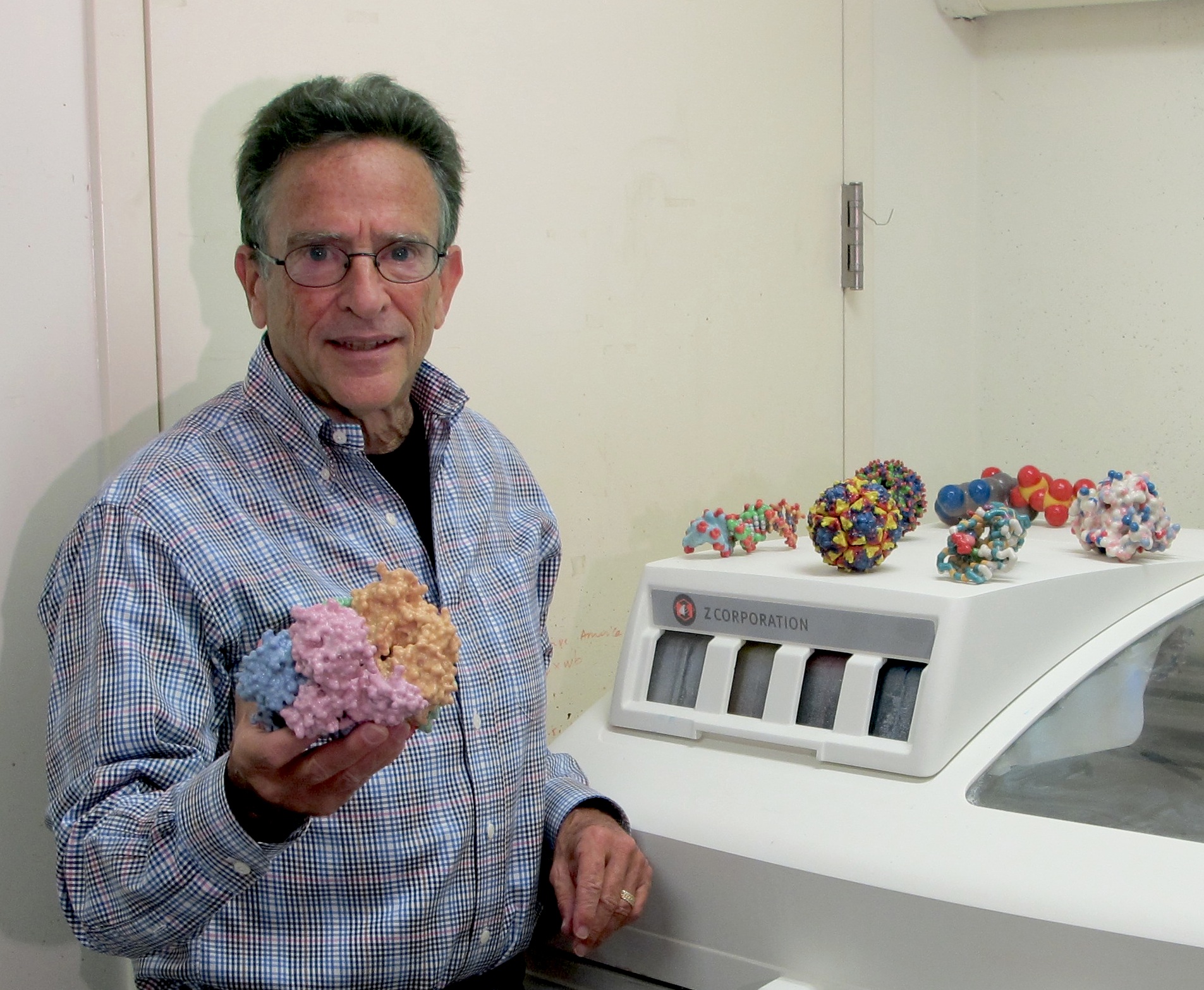 ARTHUR OLSEN holds the Anderson Endowed Chair in the Department of Molecular Biology at The Scripps Research Institute where he is founder and director of its Molecular Graphics Laboratory. He received his Ph.D. from University of California Berkeley in Physical Chemistry, and went on to Postdoctoral Research at Harvard University where he was involved in solving the first atomic resolution structure of an intact virus capsid in 1977. He returned to Berkeley in 1979 to become Assistant Director of the National Resource for Computation in Chemistry. He has been at Scripps since 1981. He is a pioneer in the analysis and visualization of biological assemblies His laboratory has developed, applied and distributed a broad range of molecular modeling and visualization software over the past 30 years, including AutoDock, which is the world’s most widely used and highly cited drug-discovery docking program. He started the first Internet distributed biomedical computing project, FightAIDS@Home, which is now running on over two million computers worldwide, and for which he was honored by resolution in the California State Legislature. He is the Director of a newly awarded NIH sponsored Center on the Structural Biology of AIDS, involving six institutions nationwide. He has pioneered many advances in molecular graphics. His latest work focuses on the development of novel and intuitive human interfaces for research and education in structural molecular biology utilizing solid printing and augmented reality technologies. Olson’s visualizations and animations have reached a broad audience through public venues such as the Disney EPCOT center, Public television, and a number of art and science museum exhibits around the world.

President John Ingersoll called the 2,305th meeting to order at 8:18 pm October 12, 2012 in the Powell Auditorium of the Cosmos Club. Mr. Ingersoll announced the order of business and introduced three new members of the Society, including the speaker of the evening.

The minutes of the 2,304th meeting were read and approved.

Mr. Olsen began by noting that we live in an age of bioatomics, with an unparalleled level of continuous knowledge from atomic to organism scale. He explained that it can be difficult to understand the various complexities of biological interactions, such as the combinatorics of biochemistry or the interaction of chemical entities through evolution. His goal is to uncomplicate these systems through visualization and he believes the results may help us better understand and explore the complex molecular systems that underlie the processes of life.

Mr. Olsen continued by discussing how scientists acquire information at different scales of structure, including optical microscopes, electron microscopes, electron tomography, and X-ray diffraction. He noted that Pauling used X-ray crystallography but also created physical models based on his observations, using them to successfully predict molecular structures that had not yet been experimentally observed. Watson and Crick also interpreted diffraction data using a physical model, both scientists recollecting in memoirs how important the model had been for exploring possibilities.

Mr. Olsen was an early adopter of three dimensional computer graphics in the 1970s, a radical change in the visualization of chemical structures. Computers were a great leap, he said, but also left behind the physicality of the old modeling methods. The typical interface of mouse and keyboard is not always intuitive and even computer generated images may not clearly convey the entire situation. He began considering the nostalgic physical models in combination with modern technology trends such as mobile devices, ubiquitous computing, video games, digital cameras, autofabrication, and augmented reality. The combination of these concepts allows custom, natural computer interfaces for exploration and learning, designed for the user and task at hand.

Mr. Olsen explained that we perceive more than we look at since we are also aware of our tactile senses and the space around objects. Physical objects are intuitively intelligible and we already know how to manipulate them. Physical models, he said, act as an analog computer in some sense, representing certain characteristics of the molecule through metaphor.

Mr. Olsen then demonstrated several prototypes, such as a virus model based on the polio virus made of multiple 3D printed pieces which can come apart and fit together. Shaking the virus pieces in a container to simulate Brownian motion can break apart or reassemble the structure using small embedded magnets that are analogous to electrostatic attractions in the real virus.

Further demonstrations included augmented reality compenents. The ability to track objects by color allows a measurement of a kind of "temperature" of the moving objects, displayed on a visual scale to assist learning where the ideal temperature range for assembly would be. A model of a peptide chain folds up because of magnets representing hydrogen bonds, attaches to other chains to form a beta sheet, then the structure folds to make a beta barrel, all real chemical geometries embodied in the physical model. It's also possible to attach sidechains that are identifiable by the computer's camera via a unique pattern, creating a new hybrid digital model. The computer can then easily calculate and display specific distances and energies of the component interactions during manipulation, even occluding the virtual components with the physical due to a knowledge of model geometry. A final physical model was surrounded by a virtual cloud of color-coded space representing the electrostatic field around the surface of the protein.

Mr. Olsen then discussed the complex environment of a cell, which requires the integration of information from many sources and scales. He highlighted an example of an animated cell with color coded structural regions, along with alternative formations of equivalent volume to better communicate the relative volume of the organelles. However, he explained that this model's detail is limited to the organelle level and that it could be improved by integrating information at the scale of molecular features.

Mr. Olsen noted that a general solution was needed to solve the packing problem of many embedded geometric volumes with differing desired densities and density gradients. A generalized set of algorithms was developed to construct models based on these physical and biological constraints, then implemented in software. This allows researchers to easily analyze models once they have been constructed, by focusing on specific areas or characteristics of interest.

Mr. Olsen emphasized the importance of reusing software when possible, noting that computer graphics developments are often driven by the film and game industry and so high-end generalized graphics systems lack scientific domain knowledge. However, it is possible to integrate that domain knowledge with good design and very little extra programming, allowing the ability to use the latest in computer graphics technology without reinventing the wheel, he said. Combining existing software in new ways enables researchers to generate and animate models very quickly, accelerating the time-consuming process of constructing simulation data at the molecular and atomic level.

Mr. Olsen believes that visualization is how science can be understood by everybody, including students, laypeople, and other scientists. The future of science may depend on our collective ability to engage and educate as much as possible, a process he feels is important maintaining a scientifically informed public.

Someone asked about the possibility of adding haptic feedback to the physical models. Mr. Olsen explained that haptic devices are still very expensive and are sometimes difficult to use since the object has to be tethered. He has experimented with them but has not yet been fully satisfied with the results, but he believes they will be more practical in the future.

Another question concerned models that incorporate larger information scales such as organs. Mr. Olsen stated that he has collaborated with other scientists that are interested in heart mechanics, including the electrophysiology and cellular calcium fluxes. He explained that it is very difficult to find biological examples where enough information is continuously known from atom to organ scales. However, drug design often depends on modeling the effect of a molecular mechanism on an organ due and could benefit from that scale of integration.

After the question and answer period, Mr. Ingersoll thanked the speaker, made the usual housekeeping announcements, and invited guests to apply for membership. At 9:53 pm, President John Ingersoll adjourned the 2,305th meeting to the social hour.