The 2,228th Meeting of the Society

Humans + Robots Will Make a Perfect Team – When?

We humans know how to lead a task and adjust it to changing circumstances—and we know how to delegate. Robots are highly accurate and fast and strong, they outdo humans in spatial reasoning—and they need no coffee breaks. Sounds like a perfect team for assembly of a large space telescope or to help an elderly avoid the nursing home for another year or two. So, where are those robots and those teams? Today “serious” (i.e. large and powerful enough) robots are restricted to specially designed structured environments. Their user manuals warn that under no circumstance can people share space with an operating robot. The reason is simple—these robots are strong enough to cause harm, yet their sensing and intelligence is “too dumb” to be trusted for human safety. In the roboticists’ parlance, today’s robots are not designed for an unstructured environment. This is less of a problem for robot rovers but quite difficult for arm manipulators. A human sharing space with a robot makes for a highly unstructured environment—yet there are urgent tasks where we need it: a robot astronaut assistant and a robot helper for the elderly are among them. Another option, the operator-guided robot, can work for some tasks (such as the Space Shuttle arm and the surgery robot), but it is inordinately slow for others: no space telescope-building astronaut and no elderly asking for a glass of juice will accept it. The way out of this dilemma is to design robots fully capable of operating in an unstructured environment, of sensing things and acting upon them on the fly. This is a new terrain—the required hardware and intelligence must be more complex and sophisticated than what we know today. In this talk we will review related scientific and technical issues, and discuss solutions. 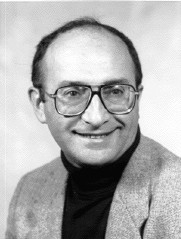 VLADIMIR LUMELSKY is the head of the Laboratory of Robotics for Unstructured Environments at NASA-Goddard Space Center, and is Adjunct Professor of Computer Science at the University of Maryland-College Park. The long-term goal of the laboratory is to develop robots capable of operating in the uncertain and changing settings likely to arise in future NASA missions. This work builds upon his work on large sensitive robot skin systems prior to joining NASA in 2004. Previously he was a professor at the University of Wisconsin-Madison, where he was The Consolidated Papers Professor of Engineering. Before this he was on the faculty of Yale University. He has held a variety of positions in both the public and private sectors: he was Program Director at the National Science Foundation, and has led large technical projects, including development of a universal industrial robot controller at General Electric (GE Research Center), and a joint robot skin development effort with Hitachi Corporation. Dr. Lumelsky also has held temporary positions at the Science University of Tokyo (Japan), Weizmann Institute (Israel) and US South Pole Station, Antarctica. He is the founding Editor-in-Chief of the IEEE Sensors Journal, and has served on editorial boards of other professional journals. He has been guest editor of special issues at professional journals; served on the Administrative Committees of IEEE Robotics Society and Sensors Council; chaired technical committees and working groups; and chaired and co-chaired major international conferences, workshops and special sessions. Dr. Lumelsky has served as a technical expert in legal cases, including multi-national litigation. He frequently gives talks at US and foreign universities, government groups, think tanks, and in industry. He is a member of several professional societies, and is a Fellow of IEEE. He is a member of the Cosmos Club. He is the author of three books and over 200 professional papers covering the areas of robotics, computational intelligence, human-machine interaction, human spatial reasoning, massive sensor arrays, bio-engineering, control theory, kinematics, pattern recognition, and industrial automation. He holds a B.S. and M.S. in Electrical Engineering and Computer Science from the Institute of Precision Technology, St. Petersburg, Russia. He received his Ph.D. in Applied Mathematics from the Institute of Control Sciences, National Academy of Sciences, Moscow, in 1970.

President Ruth McDiarmid called to order the 2,228th meeting of the Philosophical Society of Washington at 8:17 pm on November 9, 2007. She made the usual announcements. The minutes of the 2,227th meeting were read; one addition was made, and they were approved.

Ms. McDiarmid then introduced the speaker of the evening, Mr. Vladimir Lumelsky. Mr. Lumelsky spoke on the topic, Humans and Robots Will Make a Perfect Team – When?

He began by showing pictures of “robots” from popular TV shows and books. These machines typically look vaguely human-like or at least have some human-like features. They walk, run, or roll around and speak, make sounds, or perform some human-like action.

These are not robots, Mr. Lumelsky said. They are toys. Toys have a different function from robots. They exist only on TV and in books.

Real robots are tools. They don’t look as nice, but are in many ways much smarter and more useful than the popular media conception of robots.

One way, he said, to bring respectability to an area is to show it has a long history. He gave some history starting with Bible and the Talmud. Jumping forward, there was a 1915 play by Gustav Meyrink called Der Golem. “Golem” is in both the Talmud and the Bible; it’s meaning is something like “robot.” Then in 1920, there was a movie starring Paul Wegener called Der Golem. This movie ushered in a whole series of monster movies, and in 1931 followed the movie Frankenstein, which I guess is the all-time great one among robot movies. A very influential book was by Karel Capek, R.U.R, 1921, titled Rossels Universal Robots.

He showed some pictures of welders, painters, and cutters programmed to cut in any profile. He showed pictures of a NASA Rover on Mars, of a surgical robot, and of Roomba, the robotic vacuum cleaner that became famous recently. The Roomba, he noted, can be bought for $300. That is unusual. Robots generally cost a lot of money.

There is a stable market in robots. By 2006, there were over 3 million robots worldwide and growth was averaging about 10% annually. There are large R&D efforts by governments. In the U.S., robots are used by the Department of Defense for demining and rescue, as drones and scouts, and in surgery. NASA uses them for planet exploration and satellite servicing. NIH uses them for surgery.

Say we want to replace a bartender with a robot. Can we do it? No. The bartender performs too many different activites. In particular, too many of them are unexpected activities.

Perhaps a robot assistant could help an old a person stay home another year or two before going to a nursing home. Is that practical?

Again, no, this is also not possible today. Robots could perform many of the useful functions, but they cannot be made to avoid doing damage to people and things in the environment. A robot might break a window with an arm movement or step on an old lady, and it would not even be aware of doing these things. Another problem is that robots typically move very slowly, sometimes 1/100 of speed of humans, and this limits their usefulness.

Today, a robot gets located in a special cell and a sign goes on the door that says, “Never come in when the robot is turned on.” It is quite dangerous for a human to be in the proximity of a robot.

Several years ago, there was an attempt to fix the Hubble telescope with robots. Design effort was started. NASA was willing to spend perhaps a couple billion dollars. Nevertheless, the project was canceled. The expectation was that success was too unlikely to justify the effort.

There was an effort to design robots to assist astronauts working on the space station. Space walks, working outside the station, are very risky, and it would be very desirable to give the astronaut some help to reduce his time outside. Even if the robot could do such things as hand the astronaut a screwdriver, that could shorten the time outside. The problem is, having a man in a robot’s environment makes the environment very unstructured. Even having a man inside watching and controlling the robot does not solve this problem, because all the development work done on robots has been oriented toward using them in very structured environments.

The difference between good robot and stupid one is in how it generates motion. A good robot needs to know everything, to have complete information about its environment. The tools of robot design are computational geometry, graph theory, control theory, and kinematics. These tools have produced some great successes, such as factory automation, CAD design, and DNA research. Still, however, they are not compatible with humans.

The paradigm will have to change. Instead of designing them for unstructured environments and complete information, they will need to be designed for unstructured environments and incomplete information. That will mean they will need sensing abilities, intelligence, and motion based on intelligence and sensing.

For humans, mobile robots are easier to control than robot arms and motion planning is often the operator’s responsibility. He gave some examples of tasks that humans can do better than robots, such as labyrinth tasks, and tasks that robots can do better than humans, such as avoiding certain objects while maneuvering in a field. Tasks that involve combinations of these types would seem to be fruitful areas for robot-human cooperation, but much developmental work remains to be done.

To address this, he experimented by producing a robot with a proximity sensing “skin.” The “skin” was actually a plastic, and the sensors were cat whiskers attached to contacts. He dressed a machine in this “skin” and had a woman “dance with” it. This machine was just a leg and an arm, and in fact only the arm moved in the usual way, the leg only rotated. As the woman danced, she approached the robot, very carefully, your observant recording secretary noticed. Each time she approached the robot, the robot retreated. It produced an oddly beautiful effect, although it was also sort of clunky and sad. It was, however, an example of a robot reacting to avoid collision with a human. To your brutally honest recording secretary, it showed more how far we have to go than how far we have come.

During the question period, one person asked if there had been any attempt to put different kinds of sensors in the “skin.” Mr. Lumelsky said there had been. It’s difficult to put more than one kind of sensor in one skin, though, because of the space limitation.

He was asked if there exists such a thing as a biorobot. No, he said. At least he doesn’t think so.

One questioner said he lives in a six-room apartment and everything he does breaks down to 1000 to 2000 activities. Why not wire him up and have these activities recorded?

He was asked if there is any chance of robots developing independence. No, he does not think so. Are you sure, the apparently worried questioner asked. He was pretty sure. But he would not put it in writing.

Ms. McDiramid thanked our speaker, presented the usual plaque, and welcomed him to membership in the Society. She invited everyone to stay for the social hour and some more informal discussion and adjourned, at 9:40 pm, 2,228th meeting.