The 2,227th Meeting of the Society

Managing Digital Objects on the Internet

All types of information may be structured as digital objects. These may be subject to rights, require privacy, or demand security. Some may be inaccessible without permission (e.g. behind firewalls), may move from place to place, or exist at multiple locations. Some may need to be accessible for very long periods of time. An overall framework in which to address these issues will be presented and its relevance to archiving, networking, and information management will be discussed. 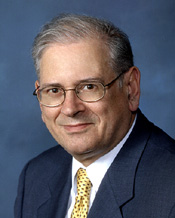 Robert E. Kahn is Chairman, CEO and President of the Corporation for National Research Initiatives (CNRI), which he founded in 1986 after a thirteen-year term at the U.S. Defense Advanced Research Projects Agency (DARPA). CNRI was created as a not-for-profit organization to provide leadership and funding for research and development of the National Information Infrastructure. Early in his career, he worked on the Technical Staff at Bell Laboratories and then became an Assistant Professor of Electrical Engineering at MIT. He took a leave of absence from MIT to join Bolt Beranek and Newman, where he was responsible for the system design of the Arpanet, the first packet-switched network. In 1972 he moved to DARPA and subsequently became Director of DARPA’s Information Processing Techniques Office (IPTO). While Director of IPTO he initiated the United States government’s billion dollar Strategic Computing Program, the largest computer research and development program ever undertaken by the federal government. He conceived the idea of open-architecture networking. He is a co-inventor of the TCP/IP protocols and was responsible for originating DARPA’s Internet Program. Until recently, CNRI provided the Secretariat for the Internet Engineering Task Force (IETF). He also coined the term National Information Infrastructure (NII) in the mid 1980s, which later became more widely known as the Information Super Highway. In his recent work, he has been developing the concept of a digital object architecture as a key middleware component of the NII. This notion is providing a framework for interoperability of heterogeneous information systems and is being used in many applications such as the Digital Object Identifier (DOI). He is a co-inventor of Knowbot programs, mobile software agents in the network environment. He is a member of the National Academy of Engineering and a former member of its Computer Science and Technology Board, a Fellow of the IEEE, a Fellow of AAAI, a Fellow of the Association for Computing Machinery (ACM) and a Fellow of the Computer History Museum. He is a former member of the President’s Information Technology Advisory Committee, a former member of the Board of Regents of the National Library of Medicine and the President’s Advisory Council on the National Information Infrastructure. He is a recipient of the 1997 National Medal of Technology, the 2001 Charles Stark Draper Prize from the National Academy of Engineering, and the 2004 A. M. Turing Award from the Association for Computing Machinery. Dr. Kahn received the 2003 Digital ID World award for the Digital Object Architecture as a significant contribution (technology, policy or social) to the digital identity industry. In 2005, he was awarded the Presidential Medal of Freedom. He was inducted into the National Inventors Hall of Fame in May 2006. He received his B.E.E. from the City College of New York in 1960. He earned his M.A. and Ph.D. degrees from Princeton University in 1962 and 1964 respectively. He has received honorary degrees from Princeton University, University of Pavia, ETH Zurich, University of Maryland, George Mason University, the University of Central Florida and the University of Pisa, and an honorary fellowship from University College, London.

President Ruth McDiarmid called the 2,227th meeting to order at 8:15 pm October 26, 2007 in the Powell Auditorium of the Cosmos Club.

Ms. McDiarmid announced that dues notices will be mailed within the next month and encouraged us to be generous. She made the parking announcement. The recording secretary read the minutes of the 2,226th meeting, in a difficult, troubled way, and they were approved.

Ms. McDiarmid then introduced the speaker of the evening, Mr. Robert Kahn of the Corporation for National Research Initiatives. Mr. Kahn spoke on Managing Digital Objects on the Internet.

The internet is now about 35 years old, Mr. Kahn began. It is not only operating, but operating on a scale none of us imagined, throughout the world. Yet there are calls all over for major revisions, for a “clean slate” internet. Those of us intimately involved respond to those criticisms by saying, if you have a solution to this problem, tell us about it and we will implement it. If you can tell us how to deal with viruses, or how to handle security, we can put that into the internet. There is no need to start over.

Very few things last as long as the internet. The technology in the transportation system, for example, undergoes constant change. The technology of the internet is virtually the same as it was 35 years ago. It is doing the job for which it was designed.

Many people think they have a pretty good idea of what the internet is. If you ask them, they will say, it’s the routers, switches, and so on.

To me, the internet is the demonstration that we could put all the pieces together and have it function as a whole. All we are doing is transferring bits.

Congress passes laws about the internet, even while they do not seem to know what it is. The Federal government has adopted a definition that is fairly global. It includes the underlying pieces, the intermediate pieces, and the applications.

Now, I propose a new definition. Instead of the original intention of moving bits, I am going to talk about it as a system for managing objects. By digital objects, he apparently meant digital representations of objects, that is, data files which can be transformed into representations of physical objects or events, such as a book, a picture, or a song.

In principle, there is no reason you could not put everything that ever happened in your history in a protected area so you could access it. There are people who are walking around with cameras recording. They call it life-blogging. They reduce it to bits and store it. You never know, maybe in the future, people will want to look into the early history of some famous person to see what happened to him in his youth.

You could store information so that you could look back and see that 20 years ago you sent an email to someone on some subject. If you are going to have that ability, you will need a system for organizing and retrieving it.

The half-life of a URL today is about six months. The editors of electronic journals would like them to be put on an electronic shelf so someone can come back a hundred years later and read them. Pictures on the wall could be digitized and stored indefinitely.

What is needed is for each object to have a handle, an identifier that tells the user what the object is in such detail as to let the user know whether that is the object, or an object, that he is looking for.

How many of you in the audience know what a book is, he asked. Most people, he said, would take something out of their briefcase, hold it up and say, “That’s a book.” But if you go to a bookstore, you might find on a shelf ten identical books. They all have the same ISBN (International Standard Book Number). Why? It’s the same book. It is ten copies of the same book. The book is the simple way it is structured. The digital equivalent of something like a book or a movie is the data structure.

A system to put handles on digital objects must have an identifier machine, a platform that is independent of the data structure of the objects. The identifiers must have multiple elements. Each element is expressed as a type of element and its value, so it can be understood by different computer systems.

The handles, or identifiers, can be used by owners of digital objects to indicate what one can and cannot do with a given DO (digital object). It can be used to manage items of value and other interests such as digital cash, bills of lading, and similar value constructs. It could enable a person buying a hamburger to trace the whole history of the cow.

It is not an enforcement means, although it can be used as such. How would you like to drive your car on an interstate set up so that when you reach 56 miles an hour, your car is lifted off with a giant magnet?

The International DOI Foundation was set up to manage the handles in the electronic publishing industry. The system is working and now has about 30 million handles in it, but great questions remain about broader systems. For example, if you move a file from a computer to a server, it may take a couple seconds. If you move a folder into a DOI-type system, the folder might have hundreds of objects in it. Each one must have an identifier that indicates all the ways the DO may be used and not used. These problems compound.

Concluding, Mr. Kahn said he believes this idea, redefining the internet as a way of managing digital objects instead of a system of moving bits, is a very powerful one. He is hoping and working to have people around the world “buy into it.”

During the question period, Mr. Kahn was asked about archive problems. The questioner remarked that he had some Beta tapes of a daughter’s wedding. Over long periods, even languages change. Mr. Kahn said that compatibility is a large and growing problem. There are data tapes in storage that cannot be read with machines currently being manufactured. Filing and storage are also problems. For an individual, digitizing and putting objects on the net can be a solution, but ultimately, the format compatibility and storage problems must be handled by someone.

Another questioner asked if it’s possible to have a system for handling objects so the handle does not ever have to change. Mr. Kahn said it is, if you can get someone to manage it for you, but it does have to be managed.

Ms. McDiarmid thanked our speaker. She presented a plaque commemorating the event and welcomed him to a year of membership in the Society. She announced the next meeting, and finally, at 9:47 pm, she adjourned the 2,227th meeting to the social hour.