The 2,349th Meeting of the Society

Magic Keys to Understanding Life and the Cosmos

New understanding of nature is always attained when closer inspection of nature is facilitated. Clues to almost any physical, chemical, and biological process in the universe across time are available from very precise measurements of stable isotopic compositions, particularly isotope ratios. Such measurements can be made on physical samples here on Earth or remotely using telescopes and satellites. Interpreting these clues requires detailed understanding of the fundamental physics and chemistry of processes that alter these ratios. Based on new, fundamental discoveries about the quantum laws that alter these ratios, an extraordinary range of problems can be investigated and better understood, ranging in scale from the atomic to the astronomical and in time from the present to billions of years ago. Precise measurements of isotope ratios recently have allowed us to interrogate and better understand the interactions of planetary atmospheres and surfaces, including biosphere interactions here on Earth. These studies have been particularly important in developing our understanding of the history of both the Earth and Mars. This talk will discuss how processes that occur on planetary scales of size and time can be studied – particularly using isotope ratios – and how these studies can be used to understand the origins and evolution not only of astronomical phenomena but also of life. 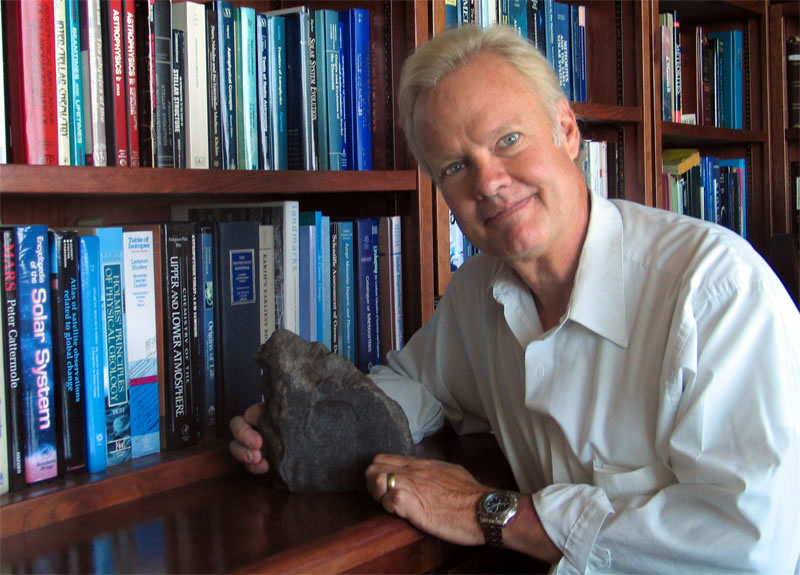 Mark H. Thiemens has spent his career studying and analyzing isotopes and isotopic compositions, particular in meteorites, chunks of space rock that have survived the fiery plunge from space through the Earth’s atmosphere. His research has addressed an unusually wide variety of problems—from ozone chemistry to global warming to questions about the prospect of life on Mars. His most recent work is on understanding climate dynamics from chemical clues embedded in South Pole ice. Mark is Dean of Physical Sciences, Distinguished Professor and Chancellor’s Associates Chair in the Department of Chemistry and Biochemistry at the University of California, San Diego. Prior to joining UCSD he was at the Enrico Fermi Institute and at the Brookhaven National Laboratory. He earned a BS at the University of Miami, and an MS and a PhD in Oceanography at Old Dominion University and Florida State University, respectively. He is perhaps best known for discovering and exploring isotope anomalies in oxygen and sulfur not predicted by classical theory, and developing a quantum mechanical understanding of them. His work has stimulated new approaches to the theories of isotopic reaction mechanisms that have led to a deeper understanding of the Earth’s atmospheric composition, the Earth’s evolution, and atmosphere-surface interactions on Earth and Mars. Mark is a member of the National Academy of Sciences and a Fellow of the American Academy of Arts and Sciences, the American Geophysical Union, the Geochemical Society, the European Association for Geochemistry, and the American Association for the Advancement of Science. Among many awards, he was named an Albert Einstein Professor by the Chinese Academy of Sciences and has been awarded the Alexander Von Humboldt Award (twice), Ernest O. Lawrence Award of the Department of Energy, and the Goldschmidt Medal of the Geochemical Society. Perhaps most emblematic of his many contributions to Earth, planetary, and cosmological sciences, an asteroid has been named for him: Asteroid 7004Markthiemens.

President Larry Millstein called the 2349th meeting of the Society to order on September 11, 2015 at 8:07 p.m. He announced the order of business and welcomed new members. Vice President Lloyd Mitchell presented the Audit Committee’s annual report which found the Society’s financial records to be in good order for the fiscal year ended June 30, 2015. The minutes of the previous meeting were read and approved. President Millstein presented a summary of the 22nd meeting of the Society held March 9, 1872, and then introduced the speaker for the evening, Mark H. Thiemens of the University of California, San Diego. His lecture was titled “Isotopes: Magic Keys to Understanding Life and the Cosmos.”

Dr. Thiemens began his lecture by explaining the fundamental nature of an isotope, which is a change in the weight of an element by the removal or addition of one or more neutrons. Dr. Thiemens likened the study of isotopes to psychology, noting that an isotope modifies the character of an element and, thus, its behavior.

Dr. Thiemens first focused on the state of the universe at 5 billion years. At that time, a curious discontinuity in the relative abundance of various elements shows that, although most of the elements are made in stars, a select few were formed directly out of the Big Bang.

Subsequently, elements have been formed in the conventional way, within stars. The inner workings of stars may be examined spectroscopically, but this method does not provide data below the upper layers. Meteorites, however, can provide more data. When a star explodes, physical grains condense immediately and trap elements the star has formed. These grains are found in meteorites, which therefore function as a record of element-forming activity beyond the outermost layers of a star. Everything is recorded, Dr. Thiemens stated; the trick is to interpret it.

To help with this interpretation, scientists need to know what the sun is made of and, specifically, what the isotope composition is. One way to gather information on the composition of the sun is to gather the sun’s emissions directly. But getting a sample of the sun is difficult, as the myth of Icarus demonstrated. Undaunted, Dr. Thiemens successfully proposed a project to NASA which would do just that. NASA approved the Genesis project, which was stationed at the L1 Lagrange point, and it captured a nanogram of particles out of the solar wind. Although it crashed upon its return to Earth, good data could be recovered. This and other experiments showed that the early sun played a large role in the formation of molecules of the planet.

Some meteorites contain organic molecules such as amino acids. The question is how the organic molecules came to be present in the meteorites. This mystery brings us to meteorite ALH840001 – the famous meteorite that suggested there is life on Mars. Calcium carbonate globules on the meteorite were identified as potentially biogenic features. This meteorite originated from the “wet Mars” period of 17 million years ago, and provides some of our limited insight into the state of Mars during that period.

To get similar data from Earth, we must journey south, an endeavor that Dr. Thiemens noted still involves small wages, bitter cold and long months of complete darkness . . . although with less danger and significantly less honor and recognition than in the past. Samples of Antarctic ice, uncontaminated by human presence, offer very high resolution time scales, as accurate as 6 months and as recent as this decade.

These samples provide an isotopic record that shows climate perturbations. Two such perturbations, as expected, are the eruptions of El Chichón in 1982 and Mount Pinatubo and Cerro Hudson in 1991, both of which raised global atmospheric sulfate and oxygen concentration. Another spike was in 1998, this time because of widespread fires in the equatorial regions. This occurred because of a spike in the El Niño which was followed by cold pacific and dry weather which ushered in La Niña. This record provides useful evidence to view the causes and effects of the cycles of the planet.

This cause and effect lens leads naturally to questions about the global climate system. Dr. Thiemens said that regardless of whether you believe in climate change, the water system is clearly perturbed. The California drought is a visible example of this. Drinking water is a less visible but more urgent global concern. 60% of the world gets its water from the rivers of the Tibetan plateau, the Ganges and the Mekong in particular. The melt rate of the glacier ice that feeds these rivers is far higher than it should be, and examining the glacier ice can give us clues as to why this is happening.

Along the way to unraveling this mystery we are also learning about the climate forces that created the mysterious “snowball Earth” period 650 million years ago. Atmospheric carbon dioxide levels plunged and the Earth froze about 1 million years later. Then about 100,000 years later, it unfroze, and nearly simultaneously precipitated a worldwide carbonate layer that can be found in the strata everywhere on Earth. The causes of this great swing — and its implications for our current climate — are still being analyzed.

Preston Thomas
Member of the Society