The 2,337th Meeting of the Society

Einstein's Spooky Action at a Distance 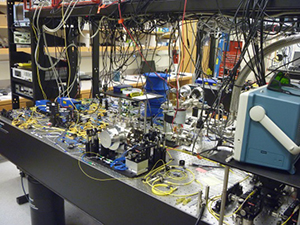 Quantum mechanics predicts many effects that may seem impossible from our ordinary view of the world. One of these is the existence of entangled states of two distant particles. These states have the property that a measurement made on one particle will instantly change the properties of the other, distant particle. Any classical interpretation of these effects would require that information must travel faster than the speed of light. That is not the correct quantum-mechanical interpretation, however, and no messages can be sent faster than the speed of light. Nevertheless, Einstein did not believe in the existence of effects of this kind or in the randomness that occurs in quantum mechanics, referring to entanglement as “spooky action at a distance”. Recent experiments using pairs of photons (particles of light) separated by large distances have demonstrated the existence of these effects as predicted by quantum mechanics. Somewhat surprisingly, the effects of entanglement also have practical applications for secure communications and quantum computing. The fundamental implications of entanglement will be discussed along with some of its implications. 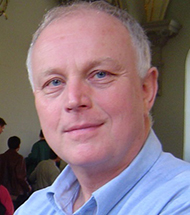 Dr. James Franson received his bachelor’s degree in physics from Purdue University and his Ph.D. from the California Institute of Technology. He is currently a professor at the University of Maryland at Baltimore County (UMBC). Dr. Franson was previously a member of the Principal Staff at the Johns Hopkins Applied Physics Laboratory and research professor in the Johns Hopkins school of electrical and computer engineering. His group was the first to demonstrate quantum cryptography in optical fibers as well as the first quantum logic operations using photons as the bits or qubits. In addition to his work on entanglement and quantum information, Dr. Franson is investigating the properties of quantum mechanics in the curved spacetime of general relativity. He is a Fellow of the American Physical Society and the Optical Society of America.

President Larry Millstein called the 2337th meeting of the Society to order on October 24, 2014 at 8:04 p.m. He announced the order of business and welcomed new members to the Society. The previous meeting's minutes were read and approved. The President then presented a summary of the 12th meeting of the Society on October 7, 1871. He then introduced the speaker for the evening, Dr. James Franson, Professor of Physics at the University of Maryland, Baltimore County, whose lecture was entitled "Quantum Entanglement: Einstein's Spooky Action at a Distance."

Dr. Franson introduced his topic by noting that Einstein did not agree with some aspects of quantum theory, such as the apparent influence of one physically distant system on another. In 1935, he with Podolsky and Rosen argued that there must be undiscovered hidden variables to explain this apparent "spooky" action at a distance. Einstein also disliked the inherent randomness arising from quantization. For example, when a single photon arrives at a half-silvered mirror, it will randomly and unpredictably go through or be reflected. Einstein's "hidden variable" theory contended that some information must be carried with the photon to predict such outcomes. But in 1964, John Bell showed that predictions based on hidden variables are fundamentally inconsistent with the predictions based on quantum mechanics in certain circumstances. The results of experiments carried out to test this inconsistency agree with the predictions of quantum mechanics.

Dr. Franson then noted that waves can display interference patterns, depending on phase differences. Light is a type of wave, and two light waves can interfere. But at the quantum scale, where wave-particle duality is the reality, every particle is described by a wave function. So, for instance, atom beams can also display interference effects.

Dr. Franson then introduced superposition states. Distinct physical states can co-exist in a quantum system, and the net system state is their sum. For the photon with two possible paths from a half-silvered mirror, reflective mirrors at the ends of both paths allow us to observe the interference pattern of the two states. Changing path lengths changes the interference pattern.

Dr. Franson then introduced the idea of entanglement. In a system of two entangled photons going in different directions toward semi-silvered mirrors, the system's state is a superposition of the states where both photons would take path A, through their respective mirrors, or path B, reflecting from the mirrors. If we detect the path of one of the photons, we know the path the second one must have taken without a separate measurement. The two photons' paths are correlated. So does the state of one photon affect the state of the other?

Dr. Franson asked how can we know that the photons exist in an entangled state. He said that we could use the concept of "nonlocal interference." We generate an entangled state, where two photons are emitted simultaneously but at an uncertain time. The system is in a superposition state over all possible times. The photons go in opposite directions to separate single-photon interferometers, and demonstrate an interference pattern no matter how far apart.

Dr. Franson questioned how to interpret this result: are the photons transferring information instantaneously? We could only accept the events where they both arrive at the same time, guaranteeing that they must have taken the same path, but this is a controversial point of view. The setup works no matter its interpretation, and can now be used for practical applications. Entanglement can also be between two photon polarizations, or between atomic or ionic energy levels.

Dr. Franson then revisited the Einstein-Podolsky-Rosen paradox, which considered quantum mechanics an incomplete theory and advocated a hidden variable theory where particles carry some information, nothing is random, and measurements are decided by these hidden variables. This theory required the assumptions of "realism" and "locality." In 1964 John Bell demonstrated by an inequality that quantum mechanics violates the most general local realistic theory. There are no classical explanations for some quantum mechanical observations; we have to conclude either locality or realism is false.

Dr. Franson then discussed several experiments showing a violation of Bell's inequality, including the work of Clauser in 1976 at Berkeley and more recent work.

Dr. Franson then introduced some applications of entanglement, such as cryptography and quantum computing. Dr. Franson's research group has demonstrated quantum logic operations with photons.

Dr. Franson then discussed his group's current research on nonlocal interferometers using macroscopic systems instead of single photons. The experiment is on phase-entangled coherent states large enough to be a visible spot on the wall and robust against loss. The experiment uses the Kerr effect, where the phase of a beam can be shifted by a control beam. The method uses two anti-correlated light beams. This phase entanglement can be used to implement a nonlocal interferometer, which can be shown to violate Bell's inequality.

Dr. Franson finally emphasized that these experiments do not imply that we can send messages faster than the speed of light, since we cannot control or choose the photon states. We can merely learn the state of both photons by measuring the state of only one.

With that Dr. Franson concluded his lecture. After the question and answer period, President Millstein thanked the speaker and presented him with a framed announcement of the lecture signed by the General Committee.

President Millstein then made the usual housekeeping announcements, invited guests to join the Society, and thereafter, adjourned the 2337th meeting of the Society to the social hour at 9:43 pm.