The 2,225th Meeting of the Society

SUSY and the Lords of the Ring

The last decade in physics has led to a array of new ideas including one called supersymmetry. SUSY is its shorter name. If valid, Nature may soon begin to reveal the existence of “superpartners,” new forms of matter and energy. Names for such hypothetical objects such as selectrons, squarks, sneutrinos and winos have already been given. What are these objects? How does humanity learn more about them? At the CERN laboratory in Geneva, Switzerland nearing completion is a ring that will help rule upon them all. It is called the LHC (Large Hadron Collider). Come to this lecture and learn about this Fellowship of the Ring. 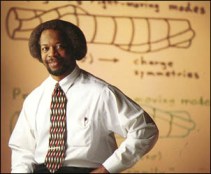 SYLVESTER JAMES GATES, JR. received two bachelor degrees (one in mathematics and a second in physics) from the Massachusetts Institute of Technology in 1973, and a Ph.D. in physics from MIT in 1977. His thesis was the first one written at MIT on the topic of SUSY. He did his postgraduate studies at Harvard University and at the California Institute of Technology. He was a member of the faculty at MIT from 1982 to 1984 and joined the University of Maryland in 1984. As the John S. Toll Professor in Physics, Gates became the first holder of this endowed chair in 1998. On leave of absence from 1991 to 1993, he served as physics professor and chair of the Physics Department at Howard University. In 2002, Gates also became Director for the Center for String and Particle Theory at the University of Maryland. He is a Fellow of the American Association for the Advancement of Science (AAAS), the American Physical Society (APS), and the National Society of Black Physicists (NSBP). He also was the first recipient of the APS Bouchet Award and was a past president of NSBP. He has authored or co-authored over 200 research papers published in scientific journals, co-authored one book and contributed numerous articles in others. He has been featured on four PBS television programs: “Breakthrough: The Changing Face of Science in America,” “A Science Odyssey,” “The Elegant Universe,” and “Einstein’s Big Idea.” he created “Superstring Theory: The DNA of Reality,” a popular-level DvD lecture collection and a book “L’arte della Fisica” both in 2006. In 2007 he was the commencement speaker for the graduates of the astronomy and physics departments at the University of California at Berkeley. He has received the MIT Martin Luther King, Jr. Leadership Award (1997), the College Science Teacher of the Year of the Washington Academy of Sciences (1999), honorary Ph.D. degrees from Georgetown University (2001) and Loyola University-Chicago (2005), the Klopsteg Award of the American Association of Physics Teachers (2002), delivered the annual Karplus Lecture to the National Science Teacher’s Association (2007) and received the Public Understanding of Science & Technology Award from the American Association for the Advancement of Science (2007).

President Ruth McDiarmid called the 2,225th meeting to order at 8:15 pm September 28, 2007 in the Powell Auditorium of the Cosmos Club. The recording secretary read the minutes of the 2,224th meeting and they were approved.

Ms. McDiarmid then made the usual announcements about the importance of supporting the Society and the matter of parking. The recording secretary read the minutes of the 2,224th meeting and they were approved with only a comment on his pronunciation.

Ms. McDiarmid then introduced the speaker of the evening, Mr. Sylvester James Gates, Jr. of the University of Maryland. Mr. Gates is a leader in string theory. He spoke on SUSY and the Lords of the Ring: Supersymmetry Theory.

Mr. Gates thanked Ms. McDiarmid for a brief introduction and recalled an introduction so detailed that it amounted to “an introduction that needs no person.” Then, picking up his electronic aids, he invoked the gods of the internet and electronics so he could get a few photons on the screen.

He mentioned that his lecture was drawn from a physics course on a DVD that he wrote called “Particle Physics for Non-Physicists: A Tour of the Microcosmos.”

Then he spoke of the James Clerk Maxwell equations describing the interrelationships of electric fields, magnetic fields, electric charge, and electric current. He showed an illustration of an electric field which looked, he said, like a porcupine on a bad hair day. He selected a few strands and painted them green, and they suddenly looked much better organized. Maxwell’s equations, he said, tell us that these photons behave exactly this way. Maxwell was the first to have the image that magnetism and a circuit will produce this effect, bundles of energy that fly through the air. Hertz and Marconi took this work and evolved it into radio. Mr. Gates held up his cell phone to illustrate what we have come to, and observed that it happened slowly. Approximately 100 years has passed since the seminal discovery to the dandy little modern device. Mr. Gates said he likes to think of the Maxwell equations as the beeper and cell phone equations.

At one point in that 100 years, Lord Ernest Rutherford was visited by a minister of the Queen. He proudly and busily demonstrated what he had learned about radio. The minister said, that’s all very good, but what is it good for. Lord Rutherford replied that he did not know, but he guaranteed that at some point the government would tax it. Recently, Leon Letterman said that 1/3 of the economy has to do with manipulation of electrons.

He gave a shoe box analogy of physics. Imagine you had a shoe box, you were not able to open it, but you wanted to know what was inside. You would, naturally, shake it. If it makes certain sounds, there are implications about what is inside. So it was with the scattering experiments. That’s how they came to believe in quarks.

Instead of talking about a table of elements, we now talk about a table of things that make up the things in the table of elements. There are the muon and the tau particle. They are essentially copies of electrons, but are more massive. Muons are about 200 times as massive, the tau particle is about 1700 times as massive. Why nature should be so constructed is one of the great mysteries of the world.

Why aren’t we soup? He asked. It is the forces of attraction that keep us organized. But for quantum mechanics, we would be soup. Gravity, the force that keeps us in the chair, is the weakest force. It also keeps the galaxies organized. Now we can see with gravity. For hundreds of millennia, we have seen the heavens only with photons. In Louisiana and Washington there are large buildings, 2.7 miles in length and L shaped, that house Laser Interferometer Gravitational-Wave Observatories (LIGO). These observatories will enable us to detect waves of gravity. It will be a glorious transition for our species.

The weak nuclear interaction is what made the monsters in the 1950’s movies glow. They were radioactive.

The electromagnetic interaction is the one we have best mastered. It is the basis for all our electronic devices.

Finally, there is the strong reaction, a different nuclear reaction. This is the one that is responsible for generating the heat from the sun.

He showed Newton’s equation on gravity. It’s not true, he observed. That brings us back to the question, what is science. A search for the truth? No! Science tries to make our beliefs, our assumptions, less false. This is a very different process. Newton’s equation is not true, but it was good enough to get us to the moon.

The characteristic of spin introduces the possibility of parallel universe made up of identical particles except for different spins. If these superpartners are really there, we expect to see a different pattern. Most superstring theories have contained within them the implications of superpartners.

Construction is about to conclude in Geneva of the Large Hadron Collider (LHC). This will be the most powerful accelerator. When the superconducting supercollider was turned down, the US made a commitment to support research at the LHC. One of the things being looked for with the LHC will be superpartners.

The “Lords of the Ring” are the scientists and engineers who will bring back from the LHC experiments new realities about the world of the very small. We are hoping they will come back and tell us the superpartners are there. It will be a great personal vindication for me, Mr. Gates said. It was a lonely world when he was writing his thesis.

It could be as important as the discovery of the electron. The laws the new particles will obey will be slightly different. It could change our limitations by changing the laws of physics. Mr. Gates expects not to know the full implications of the discoveries in his lifetime.

In the question period, someone asked, What was the driver that led somebody to think up supersymmetry?

It was discovered in the early ‘60’s in two places. In the Soviet Union, there were papers that identified it. Physicists like things to be balanced. In the West, physicists were studying string theory, and supersymmetry came from working through the mathematics of string theory. In both cases, the genesis was theory, not experiments.

“Where does spin come from?” someone asked.

“Partly, that is a religious question,” he said. ?? The only way to have objects consistent with quantum mechanics is if they have spin. Do I know it’s there? Yes. Experiments show it. Also, independent mathematical theory says they must spin. Don’t they require energy? No, this kind of spin does not.

He remarked also that physicists develop a sense of beauty. Like the difference in experience of a written score and performed music, physicists respond to beauty. One of the elements of beauty is symmetry.

Ms. McDiarmid presented a plaque commemorating the occasion to Mr. Gates. She announced the next meeting. Finally, at 9:39 pm, she adjourned the 2,225th meeting to the social hour.