The 2,224th Meeting of the Society

The Complexity of Language

How It Is Learned and How It Changes

A person’s language capacity is an immensely complex system. This lecture will consider how that complexity can actually be acquired by developing children and what implications that has for how languages change over time. Languages change sometimes through big, structural shifts, “catastrophes,” and we can see why. 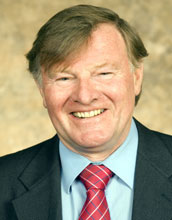 DAVID W. LIGHTFOOT heads NSF’s Directorate for Social, Behavioral and Economic Sciences (SBE). This Directorate comprises three divisions: Behavioral and Cognitive Sciences, Social and Economic Sciences, and Science Resources Statistics. SBE includes fields such as anthropology, psychology, cognitive studies, political science, linguistics, risk management and economics. Previously he had served as Dean of the Graduate School for Arts and Sciences at Georgetown University and a professor in its Department of Linguistics. In his capacity as Dean at Georgetown University, he promoted research collaborations in cognition and neurosciences, population health, bioinformatics, statistics and computing. Before coming to Georgetown in 2001, he had established a new Department of Linguistics at the University of Maryland and chaired it for 12 years. Previously he held academic positions at the University of Michigan, McGill University and the University of Utrecht in the Netherlands. He has held numerous visiting appointments in Europe and South America. He received his bachelor’s degree from the University of London, King’s College, and his master’s and doctoral degrees from the University of Michigan. He has been a Fulbright Scholar and has received fellowships from the Ford Foundation and the American Council of Learned Societies. He has authored 10 books and several dozen scholarly papers on the origin, acquisition, development and historical evolution of language.

President-elect Kenneth Haapala called the 2,224th meeting to order at 8:15 pm September 7, 2007 in the Powell Auditorium of the Cosmos Club. The recording secretary read the minutes of the 2,222nd meeting. They stand as corrected.

Mr. Haapala then introduced the speaker of the evening, Mr. David Lightfoot of the National Science Foundation. Mr. Lightfoot spoke on The Complexity of Language - How It Is Learned and How It Changes.

“You are going to see how smart you are,” Mr. Lightfoot began. He was referring to the enormous complexity of language and the remarkable accomplishment that learning it represents.

We don’t ‘learn English’ in the usual sense, he said. There is not an entity out there that individuals can approach, experience, and learn. The entity is partly learned and partly inherent, and it is fluid. What is learned depends on circumstances.

But people also have the ability to use novel sentences and to understand sentences they have never heard before. People learn, in the first few years of life, a finite system that ranges over infinity.

These language systems that are partly inherent and partly learned have three properties, recursion, composition, and poverty of the stimulus. Recursion occurs in three ways, relativization, complementation, and coordination. These are the ways the subjects of language relate to each other. Composition refers to the ways the parts of speech relate to each other. Poverty of the stimulus refers to the fact that parts of speech can be omitted but the meaning conveys. There are rules or patterns by which these things can happen in some circumstances and not others. For example, certain words can be slurred – is, are, have, has, had, would, but only in certain usages. “Kim’s taller,” works. “Kim’s taller than Jim is,” also works. “Kim’s taller than Jim’s,” does not. The principle is that something may be left out if it is (in) the complement of an adjacent, overt word. The principle not to leave out certain elements is built in, not learned.

Likewise, there are empty (missing) verbs. For example, “Max left for Rio on Wednesday and Mary did as well.”

How does this happen, this omission of words that does not reduce meaning? Mr. Lightfoot says it is because children develop internally a language in the first few years of life. Then, a social language develops after that.

Mr. Lightfoot explained the difference between a language and a dialect. A language, he said, is a dialect with an army and a navy. The distinction is political, not empirical or technical.

He gave some examples of language change. In European languages, it would be acceptable to say the equivalent of:

He has could understand, or

He wanted to can understand.

Likewise, Shakespeare wrote phrases like “I like not that,” and “How do you, madam? Actually, Shakespeare used both the traditional and modern constructions. The old constructions went out of English suddenly, within a few generations. Mr. Lightfoot believes it was because of the Danish invasion of the British Isles and that this invasion introduced a complexity which prevented the children from learning the acceptable patterns and they reverted to simpler forms.

He left us with three conclusions:

Language acquisition happens as children learn simple structures, which are subject to the principles of the linguistic genotype.

The combination of simple learned structures and simple genotypical principles yields the immense complexity of the human language capacity.

In the question period, he was asked why the continental languages did not change while the American language changed as English did. European countries did not experience an invasion and integration of foreigners as England did.

The inherent structures, should they be thought of as parameters? How many of them are there. Mr. Lightfoot said he does think of them as parameters. How many is not known, but if the number is determined in a binary way, 30 determinants would yield just over a billion possibilities. Forty would yield over a trillion possibilities. There could easily be a thousand structures.