The 2,352nd Meeting of the Society

The Anthropocene and the Future of Nature

In the last 50 years it has become clear that humans are significantly altering the planet, changing the composition and the temperature of the atmosphere, the chemistry of the oceans, and the rich diversity of natural resources of the Earth. The recognition of the scale and pervasiveness of human influence on planetary conditions is the most important shift in how we see ourselves today. Our effects on the planet, and knowledge of these effects, put us in a new geological epoch, the Anthropocene: the Age of Humans. Humans are only one of more than ten million species of plants, animals, and microorganisms that inhabit the planet. Our impact on this intricate constellation of species, their complex interactions, and the environments in which they live, and the threat it represents, is increasing every day. Maintaining a close personal connection with the coevolved neighborhood of species will be the biggest challenge for humans living in the Anthropocene and, ultimately, will define the future of Nature. 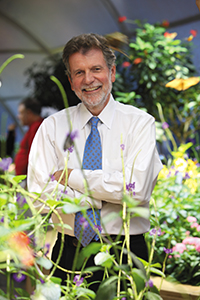 W. John Kress is Interim Under Secretary for Science at the Smithsonian and Distinguished Scientist and Curator of Botany at the National Museum of Natural History. Previously, he was Director of the Smithsonian Consortium for Understanding and Sustaining a Biodiverse Planet. John pioneered the development and use of DNA barcodes for studying plants. He is an author on more than 150 scientific and popular papers on tropical botany, and he is an author on several books, including the authoritative text: DNA Barcodes Methods and Protocols; Heliconia: An Identification Guide; Heliconias – Las Lamaradas de la Selva Colombiana; A New Century of Biology; Plant Conservation – A Natural History Approach; The Ornaments of Life, Coevolution and Conservation in the Tropics; and The Weeping Goldsmith. He also was the botanical leader on a team from Columbia University and the University of Maryland that developed Leafsnap, a tree identification smart-phone app that won the Edward O. Wilson Biodiversity Technology Pioneer Award. He has mentored many graduate students and post-doctoral fellows, and more than 30 undergraduate interns and summer students at the Smithsonian. John is a Fellow of the American Association for the Advancement of Science and has been an Adjunct Professor at the George Washington University in Washington, DC, and at the Xishuangbanna Tropical Botanical Garden of the Chinese Academy of Sciences. Among other honors, he received the Parker/Gentry Award for Excellence and Innovation in Conservation and Environmental Biology from the Field Museum, and he has been named an Honorary Fellow of the Association for Tropical Biology and Conservation. He earned a BA at Harvard and a PhD at Duke University where he studied tropical biology, ethnobotany, evolution, pollination ecology, and plant systematics.

President Millstein called the 2352nd meeting of the Society to order on October 23, 2015, at 8:08 p.m. in the Powell Auditorium of the Cosmos Club in Washington , DC. He announced the order of business, welcomed new members, and announced the appointment of Preston Thomas as External Communications Director and James Heelan as Membership Director to the General Committee. The minutes of the previous meeting were read and approved. President Millstein then introduced the speaker for the evening, W. John Kress, Interim Under Secretary for Science and Distinguished Scientist and Curator of Botany at the Smithsonian Institution for his lecture on “The Anthropocene and the Future of Nature.”

Dr. Kress began by noting that life began on Earth approximately 3.2 billion years ago. He said estimates for life today range from 3 to 20 million species, although, he noted, we have only been able to identify approximately 1.75 million. The difference between the number of species we know and the number we believe exist is explained, he said, by the remote location of some species, the minute size of others, and our inability to distinguish between like species we know. Modern techniques are helping us to define species and separate them from one another. He cautioned against focusing too much on mere numbers. The complexity and diversity of life is better understood by examining interactions between species.

To illustrate his point, he discussed interactions between plants in the banana-relative Heliconia and the hummingbirds species that exclusively pollinate it. There is a hummingbird on the island of Dominica that feeds on two species of Heliconia. These hummingbirds are dimorphic. The males and females have different bills, specifically shaped to feed on different species of Heliconia. Males and females have different feeding behaviors. Males are very territorial, while are more nomadic. Interestingly, males partition their territory, keeping a part for themselves, and setting aside a part to attract females. Males evaluates each female who enters the set-aside, chasing her away or mating with her. Dr. Kress called it “nectar farming for sex.”

Dr. Kress then discussed environmental change. In the modern era, he said, not only are we discovering new species, we are witnessing the extinction of species, attributed primarily to exploitation, habitat degradation and change, habitat loss, climate change, invasive species, pollution, and disease. Species have always gone extinct; however, the historical rates of extinction (based on the fossil record) appear to indicate that extinction rates are accelerating.

Some have proposed that this is the sign of a new age, the Anthropocene. He reviewed the geologic record. Among those who think we have entered the Anthropocene, there has been avid discussion about the event that marks its beginning. Some assert it began with farming, others with the beginning of global migration in 1492 or the Industrial Revolution. Still others favor the first atomic explosion -- it leaves a distinct layer of radioactive dust easily detected in the geological record.

What can we do about this change, he asked? Proposals range from mitigation – putting less carbon dioxide into the atmosphere, to adaptation – building infrastructure to hold the consequences of climate change at bay, to intervention – actively trying to reverse climate change.

He noted increasingly widespread concern about climate change, among, not only scientists, but also government agencies, the business community, and even Pope Francis. He encouraged everyone to acknowledge the dramatic effect humans have on nature, and said that climate change is the most important issue of the modern day. He encouraged everyone to take individual, grassroots action in response.