The 2,351st Meeting of the Society

International Trade and the Collapse of the Late Bronze Age Aegean

Professor, Classics and Anthropology
Dept. of Classical and Near Eastern Languages and Civilizations
George Washington University

For more than three hundred years during the Late Bronze Age, from about 1500 BC to 1200 BC, the Mediterranean region played host to a complex international world in which Egyptians, Mycenaeans, Minoans, Hittites, Assyrians, Babylonians, Cypriots, and Canaanites all interacted, creating a cosmopolitan and globalized world-system such as has only rarely been seen in human history. It may have been this very internationalism that contributed to the apocalyptic disaster that ended the Bronze Age. When the end came, after centuries of cultural and technological evolution, the civilized, international world of the Mediterranean regions in a vast area stretching from Greece and Italy in the west to Egypt, Canaan, and Mesopotamia in the east, came to a dramatic halt. Small kingdoms and large empires alike, that had taken centuries to evolve, collapsed rapidly, and with their end came the first recorded Dark Ages. It was not until centuries later that a new cultural renaissance emerged in Greece and other affected areas, setting the stage for the evolution of Western society as we know it today. Blame for the end of the Late Bronze Age is usually laid squarely at the feet of the so-called Sea Peoples, known to us from the records of the Egyptian pharaohs Merneptah and Ramses III. However, as was the case with the fall of the Roman Empire, the end of the Bronze Age empires in this region was not the result of a single invasion, but of multiple causes. The Sea Peoples may well have been responsible for some of the destruction that occurred at the end of the Late Bronze Age, but it is much more likely that a concatenation of events, both human and natural — including earthquakes, storms, droughts, rebellions, and systems collapse — coalesced to create a “perfect storm” that brought the age to an end. 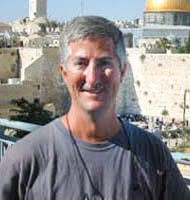 Eric H. Cline is Professor of Classics and Anthropology and Director of the Capitol Archaeological Institute at The George Washington University. He is an active field archeologist and currently serves as Co-Director of excavations at Tel Kabri in Israel. Previously he served as Chair of the Department of Classical and Near Eastern Languages and Civilizations at GW and as Co-Director of excavation at Megiddo (biblical Armageddon) also in Israel. He earned an AB in Classical Archaeology with Anthropology at Dartmouth, an MA at Yale in Near Eastern Languages and Literature, and a PhD in Ancient History at the University of Pennsylvania. And he has more than 30 seasons of excavation and survey experience at archeological sites in Israel, Egypt, Jordan, Cyprus, Greece, Crete, and the United States. He is an author on nearly 100 academic articles and 16 scholarly and popular books, including The Battles of Armageddon: Megiddo and the Jezreel Valley from the Bronze Age to the Nuclear Age; Jerusalem Besieged: From Ancient Canaan to Modern Israel; From Eden to Exile: Unraveling Mysteries of the Bible; Biblical Archaeology: A Very Short Introduction; The Trojan War: A Very Short Introduction, and 1177 BC: The Year Civilization Collapsed. Among many honors, Eric has been awarded the Biblical Archaeology Society’s “Best Popular Book on Archaeology” Award three times, the American Schools of Oriental Research’s “Best Popular Book” Award, the Trachtenberg Prize for Teaching Excellence and the Trachtenberg Prize for Faculty Scholarship – the two highest teaching awards at GWU, and he is the first faculty member to have won both Trachtenberg awards. He speaks widely and has given more than 300 scholarly and public lectures and presentations and he has appeared in more than twenty television programs and documentaries.

President Larry Millstein called the 2351st meeting of the Society to order at the Cosmos Club in Washington, D.C. on October 9, 2015 at 8:08 p.m. He announced the order of business and welcomed new members. The minutes of the previous meeting were read and approved. President Millstein then introduced the speaker for the evening, Eric H. Cline, Professor of Classics and Anthropology and Director of the Capitol Archaeological Institute in the Department of Classical and Near Eastern Languages and Civilizations at The George Washington University. His lecture was titled “Sailing the Wine Dark Seas: International Trade and the Collapse of the Late Bronze Age Aegean.”

Dr. Cline invited the audience to think back to a time more than 3000 years ago, between 1700 and 1200 BC. He introduced the “G8” of the Late Bronze Age, a flourishing international trade network among the peoples of the Aegean, the Egyptians, Hittites, Canaanites, Cypriots, Mitanni, Assyrians, and Babylonians.

These civilizations underwent a precipitous decline and were almost entirely in ruins by 1177. Archaeologists do not know why this happened, as the available evidence is fragmentary. Traditionally it has been interpreted as indicating destruction at the hands of mysterious invaders known as the “Sea Peoples”, but Dr. Cline set out a complex and ultimately more convincing explanation.

Although this is literally ancient history, Dr. Cline explained, the period is probably better remembered than most people realize. It was the time of Hatshepsut, the great female pharaoh, and Akhenaton, the heretic pharaoh who built temples to Aten. It was also the time of King Tut, Ramses III, and King Hammurabi of Babylon, famous for his code of laws. In this same period literary records suggest the Trojan War was fought, and the Biblical Exodus occurred.

Dr. Cline called it a period of globalization, or at least interconnection, not rivaled again until the modern day. From Italy in the west to Iraq in the east, artifacts and writings indicate a social network in which no culture was more than one or two degrees of separation from any other.

Tin was a principal trade good, necessary along with copper to make bronze. Copper was abundant in the Aegean, (indeed, the name copper is derived from the island name Kupros, modern day Cyprus) but tin was available only from Afghanistan, to the east. In terms of strategic importance, tin in the Bronze Age was comparable to oil today, and trade in this critical commodity tied the region together.

This period of trade and reciprocity lasted 400 years. Then around 1200 BC, one by one, these civilizations collapsed. Only Egypt survived. The question that has never been solved is “What caused the collapse?”

The longstanding hypothesis since the 1860s has been that the “The Sea Peoples” were responsible. The evidence of roughly contemporaneous destruction of many sites suggested an organized invasion, but engravings depicting “Sea Peoples” show families and supplies, more characteristic of a large-scale migration than a purely military campaign or invasion.

Dr. Cline proposed a more intricate and perhaps more accurate hypothesis that can be succinctly summarized as everything that could go wrong, did go wrong

First, drought. Pollen cores from a dried lagoon showed a 300 year dry event lasting from the 13th to 9th century BC in what is now northern Syria. Similar studies revealed drought in Cyprus, Greece, and Israel from 1200 to 850 BC.

Apparently because of the drought, crops failed and famine followed. Archives from Syrian merchants disclose desperate famine in Syria. Things were so bad the Hittite king sent for help and said the “famine is a matter of life and death.”

Violence was another factor. Records from Ugarit showed a major invasion. The Canaanite city of Hazor was violently destroyed around 1300 BC, but it is not clear who destroyed it. It is unlikely to have been the Egyptians, because Egyptian statues were also destroyed. Hazor is an inland city, suggesting that it was not the work of any “Sea Peoples.” Because the palaces and temples suffered the brunt of the destruction, Dr. Cline theorized that it might have been caused by an internal rebellion.

Finally, a 50-year pattern of unusually concentrated seismic activity was recorded along the North Anatolian fault line, running from modern day Turkey to the Aegean sea. Ruins found between 1225 and 1175 BC show earthquake victims at Mycenae, Troy, and Ugarit.

These catastrophes, both natural and man-made, each individually survivable, together may have spelled the end for Bronze Age civilizations. Under the strain of these disasters, the once flourishing trade routes may have collapsed, and with the flow of tin cut off, bronze could no longer be created. The inability to obtain materials and goods from neighboring locales undermined the foundations of these civilizations and contributed to their ruin.

Dr. Cline concluded by noting that we may be facing eerily similar circumstances today: climate change, historic droughts, rebellions, and mass migrations. The difference, however, is that today the world is much larger, we are technologically advanced, and we have the benefit of having seen this before. History can teach us if we want to listen.