The 2,283rd Meeting of the Society

The Climate for Energy Change

This talk will examine why the debate over climate change has become increasingly polarized. It will then examines the need to move towards increasing use of renewable energy, and the challenges this move poses. It will then consider a number of specific renewable energy technologies, including some particularly promising ones. Finally, it will examine the advantages of modular nuclear reactors and present the case that a policy based on clean energy rather than only renewable energy is the most defensible and affordable way to meet energy needs. 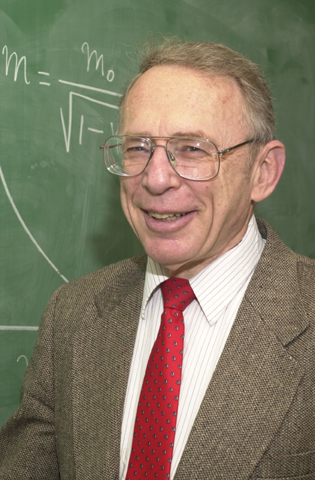 ROBERT EHRLICH is professor of physics at George Mason University and has chaired the physics & astronomy department there for many years. He earned a B.S. in Physics from Brooklyn College and a Ph. D. in experimental particle physics from Columbia University, where he worked on the Nobel Prize winning “two neutrino” experiment. He has authored or edited twenty books and close to 100 articles on a wide variety of topics, including particle physics, science education, physics & society, and energy & the environmental. Recently he has focused on energy production and use, particularly renewable energy. And, at GMU, he started and has been instrumental in developing a Renewable Energy undergraduate Minor and a graduate program in Energy & Sustainability. Currently, he is writing a textbook on renewable energy.

President Taylor called the 2283rd meeting of the Philosophical Meeting to order at 8:21 PM on March 25, 2011 in the Powell Auditorium of the Cosmos Club, Washington, DC. She announced the order of business and introduced newly elected members. The minutes of the 2282nd meeting were read and approved. Ms. Taylor introduced the speaker, Robert Ehrlich, Professor of Physics at George Mason University and his talk, “The Climate for Energy Change, Clean versus Green.”

He presented data on surface temperatures showing an increase of 0.2°C per decade over the past few decades. He pointed out the large uncertainty in the IPPC prediction. Uncertainly arises from uncertainty about future CO2 emissions both human and natural, and limitations of the models used to the make the predictions. Climate change can be mitigated but not prevented.

Mr. Ehrlich pointed out that public opinion is bifurcated on climate change, and the divergence by party affiliation has been growing. While many academics attribute lack of concern to ignorance, and believe it would disappear if people were better educated, some surveys show that those who claim to know the most about global warming are among the least concerned about it. This has been called the “Global Warming Paradox.”

Climate change predictions are all based on models. There are large uncertainties in the models and in their predictions, he said. Even different aspects of the problem have different uncertainties, he noted. For example, while there is general agreement that human activities contribute to warming, the degree of influence is uncertain. And there is great uncertainty about whether there’s a tipping point and, if so, what is it. Furthermore, he noted, with models, you know the answer you want ahead of time and there is a tendency to validate them by how well they generate the desired outcome.

Beyond that, he noted, the debate is clouded by irrelevant facts by both sides – adding heat but no light. Mr. Ehrlich showed a graph purporting to prove that the frequency of severe storms has increased over the past two decades, ostensibly providing proof of global warming and climate change. The graph shows only the peak region, he said, and it has an arbitrary start date that “hides” earlier high storm levels. It uses a five year moving average, hiding variability. It fails to adjust for recent substantial improvements in NASA’s ability to detect short duration storms. Be very skeptical of graphs that look really good, he said, especially if they fit your preconceptions.

Regardless of climate change, there is a need for energy change. Fossil fuel production will peak and then decline, sooner or later, he said. Our energy needs will only grow. It is a worldwide problem. Indeed, according to Steve Chu, what the US and China do in the next 10 years to meet their energy needs will determine the fate of the world.

There is good news, he said, nonetheless. There is broad support for renewable energy (RE) and conservation. RE, such as biomass, hydro, wind, solar, geothermal, and tidal and wave energy are free, inexhaustible and relatively benign to the environment. And it is good for the economy, national security, global security and global competitiveness.

Solar energy is very plentiful. A 500 km square of the Algerian desert could provide all of the world’s electricity. But cost is an important solar negative, he said. Natural gas produces electricity for $83/MWHr, coal, oil and nuclear are somewhat more. But solar ranges from $257 for solar thermal to $396 for photovoltaics, although costs are expected to decrease with production. Biomass, geothermal and hydro are more competitive; but, still more expensive.

“Large scale RE projects face environment concerns,” he noted, as a rare turtle walked across the screen to remind us of this.

Variability is another problem for many renewable energy sources, such as solar. We need a smart grid, he said, and energy storage systems. Solar thermal is one solution to this problem. He showed a solar thermal facility in a dessert location. Mirrors surrounding a tower reflect the sun’s rays to a focusing element. The energy is used to heat a salt. The molten salt is pumped to and from an underground storage tank, where it stays hot for long periods of time. The heat is used to produce steam to generate electricity. That way, he said, the facility can generate power day and night.

And there are other underappreciated sources of renewable energy he said.

Solar chimneys, he explained, are tall cylinders (like industrial smokestacks) surrounded by large area passive solar heat collectors. The collector trap heat from the sun much the same as a green house does. Warmed air moves from the collector area up through the chimney with enough force to drive turbine electric generators at the base of the tower. Enough heat is captured by the collectors to keep the air moving both day and night. Efficiency is directly proportional to height, he noted,

A 195 meter high 50 KW prototype was built in Spain by the Germans. It was inexpensive to operate but far less than1% efficient. The chimney collapsed in high winds. An Australian outfit wants to build a 200 MW chimney four times as tall as the Empire State Building.

Geothermal power is another unappreciated resource, he said. It is abundant, but hard to get to. The cost of drilling by conventional methods increases exponentially with depth, putting most geothermal sources out of reach, except in regions having high thermal gradients. Costs with a new drilling method, hydrothermal spallation, increase linearly with depth. It drills by fracturing rock with pressurized water and heat. The method promises to open up vastly greater geothermal resources to recovery.

Another underappreciated power source is dynamic tidal power, using very long dams projecting straight from a coast line to generate power from the tidal rise and fall of the ocean. Simulations suggest that a 60 km dam off the coast of China could supply 30 GW peak power! But no such projects have been undertaken, he said.

All three suffer from a common problem. They have never been tried on a large scale and only a large scale project can provide substantial amounts of power. Thus, investors will be unwilling to provide the large amount of capital required to build the project without such a demonstrated technology.

Mr. Ehrlich then turned to nuclear power. He first addressed the perception that it poses a radiation hazard. Estimates are that Chernobyl released 3 billion Curies of radiation, he said. WHO estimates that the 20 year dose for the 5,000,000 residents most highly exposed to the radiation is no more than the background radiation, and maybe as low as 10% of it. Mr. Ehrlich pointed out that the radiation released by burning coal is much worse than this.

He noted that it would take some time before nuclear power plants can be built to replace coal burning ones. Natural gas is the best short term solution to our energy needs, he said. It is cleaner than gasoline and costs roughly half as much. According to T. Boone Pickens, he said, “If America doesn’t kick its addiction to foreign oil by using the natural gas reserves…it will be seen by future historians as the dumbest civilization in history”

But natural gas also will not last forever, and the nation and the world will need a long term solution to its energy needs, he indicated. Nuclear power can produce clean energy for the foreseeable future. The administration seems to agree, at least in part, as President Obama has called for a new generation of nuclear power plants and loan guarantees to get them built. If the proposals go forward, what kind of new plants will they be, he asked?

Small modular nuclear reactors offer several key advantages, he said. There are 12 leading designs for small modular nuclear reactions, he reported. Seven of these can be build by 2020; but, probably not in the US (for regulatory reasons, mainly), even though 6 of the designs originate here. These “mini nukes” or small modular reactors (SMRs) incorporate passive safety systems, are simpler to operate than current designs, go for many years between re-fueling, which would be done at a factory, can be “daisy chained” to provide scalable power, can be located closer to users offering grid independence and service to remote locations, and they can serve as load-balancing and back up reserves for other power generating methods. SMRs also have several economic advantages, he said. They are less expensive and require much lower initial capital outlays than today’s nuclear plants.

However, he said, we will not be driving Ford Nucleon, he said, showing a publicity photo of the nuclear powered concept car from 1958.

He discussed a 25 MW Hyperion reactor, noting that rosy cost estimates should be treated with, “some skepticism.” It is designed to be environmentally friendly. The reactor is encased in steel compartment and buried in the ground inside a reinforced vault. It uses a lead-bismuth coolant, and has very few moving parts. It is never opened on site and it produces only a softball sized amount of waste, he said. It is designed for transport and to be opened for repair and refueling at the factory. It needs refueling only every 8—10 years.

Another inherently safe SMR is the helium gas cooled pebble bed reactor in which the fuel is encased in tiny pellets that cannot get hot enough (on their own) to split or melt and thus cannot form a critical mass.

Nuclear fuel costs about 0.7cents / KWh, the fuel supply is virtually unlimited, mining does not impose the same environmental costs as other forms of energy, spent waste is a political issue not a technical one, the new designs are inherently safe, and nuclear energy releases no CO2, he said.

Mr. Ehrlich ended his talk with a summary of research on clean and green energy at George Mason University and on a minor in Renewable Energy at GMU that he developed. He then answered questions from the foor.

After the talk, Ms. Taylor presented a plaque commemorating the occasion. She made the usual housekeeping announcements. She invited visitors to apply for membership and announced the 2,284th meeting. Finally, at 9:59 pm, she adjourned the 2,283rd meeting to the social hour.