The 2,335th Meeting of the Society

The Search for Life in the Solar System and Beyond 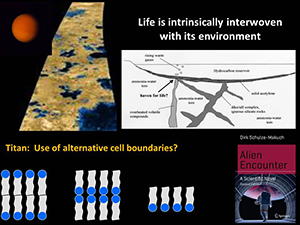 The lecture will survey the Solar System for other possible habitats for life. It will discuss how organisms could have adapted to environmental niches on Mars, Venus, Titan, and the icy moons of the outer solar system. Some of the niche environments on these planetary bodies may serve as a possible habitat for life, but would require extreme adaptations and exotic life styles for organisms that live there. The lecture will also discuss some newly discovered exoplanets that might serve as localities for life. Finally, the lecture will consider some of the more controversial solutions to the Fermi Paradox: if life is abundant in the universe, why haven’t other forms of intelligent life become known to us.

DIRK SCHULZE-MAKUCH is a Professor in the School of the Environment at Washington State University and Guest Professor at the Technical University in Berlin, Germany. He also has an appointment as Adjunct Professor at the Beyond Center at Arizona State University. He earned a Diplom in Geology at Justus Liebig University and a PhD at the University of Wisconsin-Milwaukee. He worked at Envirogen, had his first faculty appointment at the University of Texas at El Paso, and was a faculty fellow at the NASA Goddard Space Flight Center before joining the faculty at the Washington State University. He also has been affiliated with the University of Vienna, Austria and the German AeroSpace Center (DLR) in Berlin. Among other awards, Dirk received the Friedrich Wilhelm Award from the Humboldt Foundation, for extraordinary achievements in the field of exobiology. He is an author on more than one hundred scientific publications on planetary habitability and astrobiology, and he is an author of two science texts, including the astrobiology primer “Life in the Universe: Expectations and Constraints”, three popular books on science and two science fiction novels. He is a familiar media figures as well, having appeared in documentaries on National Geographic, the Discovery Channel, NHK-TV (Japan) and ARD (Germany).

President Larry Millstein called the 2335th meeting of the Society to order on September 19, 2014 at 8:04 pm. He announced the order of business, thanked sponsors, memorialized two members recently passed away, and announced newly elected members. The minutes of the previous meeting were read and approved. President Millstein summarized the proceedings of the 9th meeting of the Society held on June 24, 1871. He then introduced the speaker for the evening Dirk Schulze-Makuch.

The lecture was entitled The Search for Life in the Solar System and Beyond: Habitats and Exotic Possibilities.

The speaker began with the first potentially habitable place: Venus. Venus was not always so hot as to make it uninhabitable as evidence suggests that it once was in the habitable zone and had oceans. Life could have arisen there as it did early in Earth's history or microorganisms could have been carried from Earth to Venus on meteors. Life that existed when Venus was cooler might have adapted by moving into the atmosphere. The lower cloud layer on Venus is 30 to 80ºC and one bar of pressure, not bad for life, with large stable clouds of hydrogen, oxygen, hydrogen sulfide, and sulfur dioxide. Although the pH is zero, life might survive in these conditions, akin to extremophiles on Earth. There may actually be some evidence for life there now

The next potentially habitable place is Mars. Although Mars today is cold and dry, it had water in the past, and may have it now. Extremophiles might live near the Martian surface. Hydrogen peroxide found there could serve as an antifreeze, absorb water from the atmosphere, and provide oxygen. The speaker discussed whether the Viking experiments did actually detect life. It is possible that hydrogen peroxide may have oxidized organic molecules that would have signaled the presence of living organisms, and that organisms adapted to the arid conditions of Mars might have been damaged by water used in some experiments. The Mars Science Lab on Curiosity may give us more information. Beyond that, there are proposals to colonize Mars, possibly using a less expensive one-way mission, rather than a round-trip. The old human pioneering spirit is still alive: there are many volunteers to be the first to go.

The next potentially habitable place is Europa. Europa has a surface ice layer covering an ocean of water that may be as deep as 100 kilometers. Its mantle is hydrothermally active and may produce convection currents, like those in oceans on the Earth. This may give rise to life powered by chemosynthesis, as used by some organisms found at deep ocean vents on Earth. There are other models such as methanogenesis and gathering energy from the salinity gradients in the ocean.

The next potentially habitable place is Titan. Titan is very like Earth in that it has a thick atmosphere of simple organic compounds, although its clouds are composed of methane which produce methane rain. There are hydrocarbon lakes on the surface composed of ammonia and water, and there are subsurface oceans. Although Titan is now cold, there may be localities on Titan that are warmer, and it was warmer earlier in its history. Life originating on a warm Titan might subsequently have adapted as Titan cooled. The presence of methane on Titan needs an explanation as methane is normally destroyed by UV radiation. Catalytic hydrogenation of acetylene by life forms would generate methane. Titan is so different that life in its environment would indeed be original, and a mission has been proposed to NASA to study the lakes on Titan’s surface.

The speaker then discussed exoplanets. These mostly orbit M-class stars, which have a smaller liquid-water zone than the Sun. Some seem to be in habitable zones and bear some similarity to Earth. Gliese 667c has an Earth Similarity Index of 0.84 and an average temperature of 30ºC. Kepler 62E, 1200 light years away, is 3.6 times Earth’s mass and 1.6 times Earth’s radius, and its average temperature may be around 31ºC. Of course, just because a planet is in the “habitable” zone and has similarities to Earth, does not mean life exists there. We should be prepared, however, to think about lots of different forms of life.

But where are the intelligent life forms? The mathematician Johnny Von Neumann calculated that an intelligent species could explore the galaxy in 4 million years. So why have they not made contact? That's the Fermi Paradox. There are several possible explanations. Maybe they simply have not discovered us. Or perhaps the Earth seems inhospitable to them since it is 75% water, reflects a lot of ultraviolet radiation, and its atmosphere is 21% oxygen, near the combustion point for many organic compounds. Or perhaps, the speaker quipped, we are part of a computer-generated hologram, which would explain the observer effect in quantum mechanics and the values of natural constants.

Even if there is intelligent life elsewhere, it is not clear that we know how to contact it. Traditional SETI projects only look at radio frequency signals. And we have to realize that other life forms may be so different from us that we will have to shift our perspectives and methods altogether to find them.

With that Dr. Schulze-Makuch concluded his lecture. After the question and answer period, President Millstein thanked the speaker and presented him with a framed announcement of the lecture signed by the General Committee.

President Millstein then made the usual housekeeping announcements, invited guests to join the Society, and thereafter, adjourned the 2335th meeting of the Society to the social hour at 10:03 pm.

President Millstein then made the usual housekeeping announcements, invited guests to join the Society, and thereafter, adjourned the 2335th meeting of the Society to the social hour at 10:03 pm.