The 2,407th Meeting of the Society

Archeology of the Milky Way -- The Mystery of "Invisible" Mass

Photographs showing the Milky Way extending across the night sky are a vivid portrayal of the vast expanse of our Galaxy.  While the billions of stars that we can see in the Milky Way constitute a vast amount of matter, they make up only a small fraction of the total amount of matter we know is there.  The vast majority of “matter” is not detectable by standard methods of direct observation.  It is in the form of matter that we can only detect indirectly. We refer to it as “Dark Matter” and its nature remains a mystery.

Historically the existence of Dark Matter and estimates of its mass were inferred from critical observations of the motions of stars around the center points of galaxies. Since it was first conclusively demonstrated, there have been many observational and theoretical studies aimed at better quantifying Dark Matter in the universe and understanding its nature; but, it remains unexplained.

Currently, ESA’s Gaia Satellite is carrying out sensitive positional and radial velocity measurements of about one billion stars in the Milky Way (about 1 per cent of the galaxy’s stellar population) with the accuracies necessary to produce a detained stereoscopic and kinematic star census and 3-dimensional map of the galaxy.  These observations are opening up new opportunities to study Dark Matter that, hopefully, will lead us to a better understanding of its nature. This lecture will discuss how we and others are using this data to learn more about Dark Matter and understand its fundamental nature. 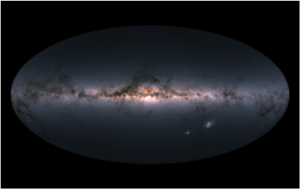 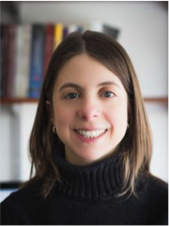 Mariangela Lisanti is Assistant Professor of Physics at Princeton University.

Mariangela is a theoretical particle physicist and is primarily interested in dark matter.  Although dark matter comprises nearly 85% of the matter in the Universe, its has so far eluded direct detection, and its fundamental nature remains unknown.  Her research focuses on understanding the particle and astrophysical nature of dark matter through its detectable signatures.  She tests ideas about dark matter using data from a wide range of observational probes, including gamma-ray and astrometry missions.

Mariangela is an author on numerous scientific publications.   Among other honors, she is the recipient of a Sloan Research Fellowship and a Cottrell Scholar Award and was a finalist for the Blavatnik Award for Young Scientists.

She earned her BA at Harvard and her PhD at Stanford.

On April 12, 2019, in the John Wesley Powell Auditorium of the Cosmos Club in Washington, D.C., President Larry Millstein called the 2,407th meeting of the Society to order at 8:01 p.m. He announced the order of business, that the evening’s lecture would be livestreamed on the internet, and welcomed new members to the Society.

President Millstein then introduced the speaker for the evening, Mariangela Lisanti, Assistant Professor of Physics at Princeton University. Her lecture was titled, “Understanding Dark Matter: Archeology of the Milky Way – The Mystery of ‘Invisible’ Mass.”

Lisanti said scientists can use the gravitational effects of an object to infer its presence. She then explained that scientists should be able to predict a star’s speed around the center of the Milky Way. Newtonian gravity dictates that orbital speed is based upon the mass being orbited, decreasing when the enclosed mass decreases and when separation increases. However, the galaxy is rotating much faster near its outskirts than expected from Newton’s laws.

There are two possible solutions to this problem. First, that Newton’s laws are flawed. To modify those laws to fit the observed galaxy, visible matter must be able to source accelerations greater than Newton predicted. But reproducing flat rotation curves over-predicts the vertical velocity of stars. This hypothetical solution is thus likely incorrect.

The second solution is that there is mass in the galaxy that scientists cannot see. This unseen mass is dark matter.

Lisanti said the galaxy is within a “halo” of dark matter, extending ten times the diameter of the visible galaxy, moving with the same average speed galaxy’s edge. Absent data, scientists assume the dark matter halo is smoothly distributed and has no preferred direction or motion and therefore does not lose significant energy.

Lisanti then explained that scientists believe, while rare, dark matter collisions with visible mass can be detected. A variety of detectors are currently being tested around the world. One such detector is a large tank of liqud xenon placed under a mountain in Italy, designed to detect the movement created by a dark matter collision with a xenon nucleus.

One way dark matter may react with a nucleus is through the Higgs Boson, recently discovered by the Large Hadron Collider. Dark matter may exchange a Higgs Boson with a quark, causing the dark matter to recoil off the nucleus. By observing a nucleus at rest that then moves, scientists will indirectly detect dark matter.

To create an accurate dark matter map, scientists must understand that the galaxy formed when small galaxies combined and then trapped and incorporated other nearby galaxies. Lisanti said scientists can then “rewind” the incorporation process to create the Milky Way’s “family tree” by examining stellar positions, velocities, and chemical properties.

From the L2 Lagrange, the ESA’s Gaia satellite repeatedly maps star locations to identify their motions. So far, the Gaia satellite has gathered sufficient data to infer 7 billion years of the galaxy’s cosmic genealogy, showing multiple streams of galaxies both recently incorporated and currently being incorporated into the Milky Way. By observing perturbations in these streams, scientists can infer the tracks of dark matter clumps, or “subhalos,” that passed through.

In 2018, scientists published the first potential evidence of a dark matter subhalo by identifying similarities between the observed GD-1 stream to the model of a perturbed GD-1 stream.

Lisanti’s team has been studying the galaxy identified as donating the majority of the stars in the inner part of the Milky Way. By measuring these stars, Lisanti believes she can conclude how fast the donor galaxy’s dark matter is moving.

In sum, these conclusions and those that follow will lead to a more accurate map of the dark matter in in the Milky Way, which will allow scientists to create better dark matter detectors.

Temperature: 21°C
Weather: Cloudy
Attendance in the Powell Auditorium: 200
Viewing Through the Live Stream on the PSW Science YouTube Channel: 46