The 2,411th Meeting of the Society

It's Different and Why

All of the fundamental forces of nature follow the laws of quantum mechanics, except one: gravity. Incorporating gravity with the electromagnetic, weak and strong forces into a single model is one of the greatest challenges facing modern physics.

This lecture will explain why unifying quantum mechanics with gravity requires a radically new perspective on nature. It will outline how physicists have successfully followed a reductionist program to build the Standard Model of physics, which describes all of the other known forces of nature. It will then explain why black hole thermodynamics and other considerations have led to the idea of “holography,” which suggests that some of the universe’s dimensions may be, on a fundamental level, an approximation and an illusion. 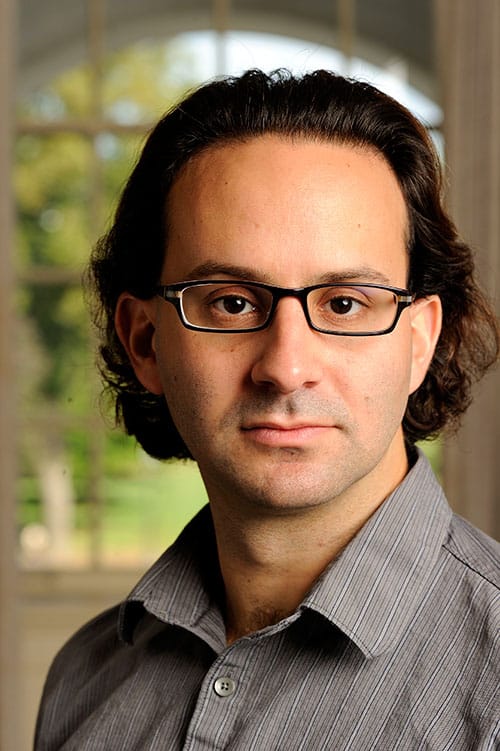 Jared Kaplan is Associate Professor of Physics at Johns Hopkins University. He has been a visiting Professor at the Stanford Institute for Theoretical Physics and the Physics Department at the University of California – Davis. He was a Research Associate at SLAC National Accelerator Laboratory and was a Postdoctoral Fellow at Stanford University.

He is a theoretical physicist with broad interests in effective field theory, particle physics, cosmology, scattering amplitudes, and the conformal field theory (CFT) bootstrap. His present research uses CFT to learn about quantum gravity via the AdS/CFT correspondence. Recently he has also been collaborating with both physicists and computer scientists on Machine Learning research.

Among other honors and award, Jared is the recipient of a grant from the Simons Collaboration on the Non-Perturbative Bootstrap, an NSF CAREER Grant and a Johns Hopkins Catalyst Award. He was an Alfred P. Sloan Research Fellow and a Kavli Fellow, as well as the recipient of the Hertz Foundation Graduate Fellowship, a National Science Foundation Graduate Research Fellowship, and the James Mills Pierce Fellowship of Harvard University.

Jared has authored numerous peer-reviewed publications, organized several technical conferences, and has given many invited lectures.

On September 6, 2019, in the John Wesley Powell Auditorium of the Cosmos Club in Washington, D.C., President Larry Millstein called the 2,411th meeting of the Society to order at 8:05 p.m. He announced the order of business, that the evening’s lecture would be livestreamed on the internet, and addressed the annual business of the Society. President Millstein then welcomed new members to the Society, and the minutes of the previous meeting were read and approved.

President Millstein then introduced the speaker for the evening, Jared Kaplan, Associate Professor of Physics at Johns Hopkins University. His lecture was titled, “Why Quantum Gravity Is Different.”

The Standard Model of Particle Physics describes three similar forces: electromagnetism, the weak force, and the strong force. Kaplan said gravity has been considered similar those forces, but in recent decades it has become clear that gravity is so fundamentally different from the other forces as to revolutionize the understanding of space and time.

The Standard Model arose from scientists colliding particles to learn about their constituent parts and their short distance interactions. In 1911, the Rutherford-Geiger-Marsden experiments beamed alpha particles through gold foil to discover atomic nuclei. Using higher energy in 1968, the Stanford Linear Accelerator used deep inelastic scattering to substantiate the existence of quarks. Subsequent collision experiments at even higher energies have revealed the Higgs Boson, W and Z Bosons, heavy quarks and mesons.

Kaplan said this reductionist approach has illuminated more macroscopic scientific understanding. For example, understanding the forces of attraction and repulsion at work in atoms allowed scientists to deduce limitations on the number of elements in the universe. Similarly, scientists were able to predict the existence of particles like the Higgs Boson prior to their actual discovery.

Kaplan said one means of predicting future discoveries is through observing very weak forces at great scale. For example, gravity is billions of times weaker than electromagnetism. But we know gravity exists because it we experience its large scale effects.

That gravitational forces are proportional to energy distinguishes it from the other three forces in the Standard Model. With extremely high energy, gravity will become as consequential as electromagnetism, and at the Planck scale of 10-35 m, gravity will be as significant as the other forces. If scientists were able to observe forces at this scale, Kaplan believes they could deconstruct gravity similar to how scientists have deconstructed particles.

Classical gravity is Einstein’s Theory of General Relativity, whereas quantum gravity seeks to describe gravity according to the principles of quantum mechanics. In General Relativity, black holes are inescapable and cannot be explored with high energy physics because adding energy will only make the black hole bigger.

Physics is about describing the states of nature and how they change with time, and information is a description of a state. In 1972, Jacob Bekenstein theorized that the information stored in a black hole is associated with its event horizon area, not its volume. If true, then volume – space itself – cannot be fundamental. This means the fundamental theory of physics must have fewer dimensions than previously believed.

One theory is holography, the idea that a flat surface can be encoded with all of the information in a volume. At its heart, holography connects gravity in a space called ADS with conformal field theory, which is scale invariant.

Addressing the question of how a theory living in two dimensions has three dimensions, Kaplan said the extra dimension is the “zooming in and out” of the scale invariant field.

Kaplan then summed his talk by stating that although reductionism has been successful for discovery the Standard Model, it apparently cannot be used to explore gravity. He believes holography will lead to a better understanding of quantum gravity, particularly the physics of black holes.