The 2,412th Meeting of the Society

Space Architecture for a Moon Village

Five decades after humans first set foot on the Moon and more than 45 years since the last foot left its surface, a new initiative is underway to return there, and this time the aspiration is to settle there on a permanent basis.

Skidmore, Owings & Merrill LLP (SOM), in partnership with the European Space Agency (ESA) and the Massachusetts Institute of Technology (MIT), has released a design for a “Moon Village,” a concept presented by ESA Director General Jan Woerner for the first full-time human habitat on the lunar surface.

Solving the challenges of designing a habitat for the moon environment requires cross-disciplinary collaboration, and a completely new way of approaching the space industry’s most complicated problems. ESA is providing a diverse range of expertise from the European Astronaut Centre and the European Space Research and Technology Centre. This experience is coupled with faculty from MIT’s Aerospace Engineering Department, and SOM’s extensive experience in architecture, engineering, urban planning, and sustainable design, ensuring a holistic approach to the project.

Resiliency and self-sufficiency are key design requirements. The master plan envisions a Moon Village on the rim of Shackleton Crater, near the moon’s South Pole, which receives near continuous daylight throughout the lunar year. This kind of planning is essential for the first of three envisioned development phases—several critical infrastructural components and habitable structures—that would allow the Village to harness sunlight for energy and set up in situ resource utilization (ISRU) experiments, or the generation of food and other life-sustaining elements using the Moon’s natural resources. Water from the permanently shadowed depressions near the South Pole would be extracted to create breathable air and rocket propellant for transportation and for the support of industrial activities. The settlement would be clustered close to the crater’s water-ice deposits. Additionally, each cluster of modules would be connected to enable seamless mobility between structures, with communications towers on the highest ridges of the uneven terrain.

The individual pressurized modules are designed to inflate and expand to increase user space for future growth and program requirements. The concept calls for three to four-story structures, with workspaces, living quarters, and environmental control and life support systems. These inflatable structures would provide—together with regolith-based protective shells—resistance to extreme temperatures, projectiles, regolith dust, and solar radiation. More importantly, these features would enable the Moon Village to carry out its much larger purpose as a scientific, industrial, and entertainment development, and an endeavor with far-reaching goals.

The Moon Village is an open, multi-partner concept that fits into ESA’s reflection on future exploration beyond 2050—complementary to projects already validated by ESA’s member states—and into NASA’s Strategic Plan to “extend human presence deeper into space and to the Moon for sustainable long-term exploration and utilization.” It is an opportunity to explore the Moon in its entirety, to spur research and commercial growth, and to serve as a stepping stone to achieve even greater ambitions: extending the human footprint to Mars and beyond. 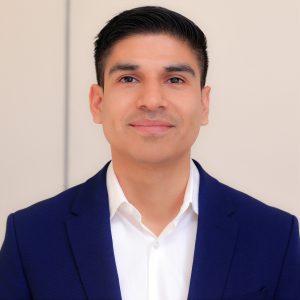 Daniel Inocente is a Senior Architectural Designer with Skidmore, Owings & Merrill (SOM) and a leader in the Design Science Computation Group and in building partnerships with organizations like the European Space Agency, MIT and NASA to advance the forefront of research and design.

In his current role at SOM, he is responsible for designing and implementing strategic methodologies for building systems and structures across sectors that include skyscrapers, transportation, aviation, cultural, government, science, urban developments and space architecture. He is committed to the view that new methodologies emerge from putting research into action, driving performance, efficacy in material and energy use, behavioral responsiveness and the practice of architecture. As he sees it negotiating the relationships between contemporary urban systems, expressive qualities and engineered architecture is fundamental to achieving new forms of elegance and functionality that elevate the human experience. Daniel considers the thoughtful integration of social, environmental, engineering and material conditions a necessity for producing intelligently differentiated architectural solutions.

Daniel studied Architecture at the Southern California Institute of Architecture, focusing his thesis on environmental science and infrastructural design.

On September 20, 2019, in the John Wesley Powell Auditorium of the Cosmos Club in Washington, D.C., President Larry Millstein called the 2,412th meeting of the Society to order at 8:02 p.m. He announced the order of business, that the evening’s lecture would be livestreamed on the internet, and welcomed new members to the Society. The minutes of the previous meeting were read and approved.

President Millstein then introduced the speaker for the evening, Daniel Inocente, Senior Architectural Designer, of Skidmore, Ownings & Merrill, or SOM. His lecture was titled, “Space Architecture for a Moon Village: Designing for Space Habitation.”

Until the 20th century, architects needed to rely on scale models and drawings of proposed structures to represent their vision. But in recent decades, digital technology arising from the aerospace industry has revolutionized architectural methodology. Modern structures can now be precisely designed to respond to the environments in which they will exist.

SOM is collaborating with federal government partners to research new methods of constructing smaller structures. For example, working with the U.S. Army Corps of Engineers to research using polymers to 3D print entire structures and using gantry systems with additive manufacturing to explore building with cement.

SOM is now collaborating with the European Space Agency and the Massachusetts Institute of Technology to collaborate on a proposal for constructing a Moon Village. The team is considering the structural necessities of such a village, mission design scenarios, and human systems.

Inocente said the three key criteria for evaluating a site for optimal development are the terrain, presence of water, and the existence of resources.
On the moon there are two distinct types of terrain, the Maria and the Highlands. The poles are primarily highlands, which offer an opportunity for near continuous sunlight collection and consistent communication with Earth.

Water is a medium both for energy and for life support. The project team believes that coal traps on the moon’s South pole contain small water ice deposits at high elevation.

The moon’s principal resources inside the regolith are silicate and oxide minerals. Inocente said accessing those materials would allow production of tension structures, and composite structures to shield radiation.

The project team has identified a flat lunar landing site and considered the SpaceX Falcon Heavy and the Blue Origin New Glenn rockets for transporting equipment to the moon. The transport vehicle will impact how equipment and any pre-fabricated structures must be designed to pack efficiently.

Because rigid grounding is necessary to support a multi-level structure, the project team determined it could not entirely rely upon inflatable structures. The habitat they have designed is a registered shell structure and modular systems that may be assembled in space. Future structures will be constructed in situ by subsequent mission teams.

The project team calculates 4.3 m3 of space per human body are necessary for moon habitats. Spaces must also be designed to facilitate human health and bodily functions. For example, the 400 m3 habitat is designed to maximize perimeter space, encourage as much human movement as possible, and allow sunlight.

Inocente described the structural design of the habitat shell with continuous curvature to minimize bending. He then described the materials and configurations the project team has explored for connecting rigid and inflatable habitat components.

Inside the habitat is a composite floor system that needs to be designed for deployment inside the inflated structure. The floor assembly has a thickness of approximately 400 mm and may be used for storage. While titanium would be optimal, Inocente said it is cost prohibitive, so the floor assembly will be aluminum.

The project team has also considered integrating natural and artificial light, both to maintain circadian rhythms and to entertain occupants.

The moon village plan must also be designed to expand. The initial mission will delivery mobility systems and establish proof of concept. And subsequent missions will land bigger equipment to allow landing and moving habitats. After four missions, habitats will be fully functional.

Inocente acknowledge the interdisciplinary expertise necessary for the Moon Village to succeed, and he said the project team invites experts to share their expertise to refine the village’s design.


Temperature: 23°C
Weather: Clear
Attendance in the Powell Auditorium: 148
Viewing Through the Live Stream on the PSW Science YouTube Channel: 20