The 2,415th Meeting of the Society

Successfully launched on a SpaceX Falcon 9 rocket in April 2018, NASA’s Transiting Exoplanet Survey Satellite (TESS) is well on its way to discovering thousands of exoplanets in orbit around the brightest stars in the sky. During its initial two-year survey mission, TESS is monitoring more than 200,000 targeted bright stars in the solar neighborhood for drops in brightness caused by planetary transits. This first-ever space borne all-sky transit survey is identifying planets ranging in size from Earth-sized to gas giants, orbiting a wide variety of host stars, from cool M dwarfs to hot O/B giants.

TESS stars are typically 30 –100 times brighter than those surveyed by the Kepler satellite; thus, TESS planets are proving far easier to characterize with follow-up observations than those from prior missions. Such TESS follow-up observations are enabling measurements of the masses, sizes, densities, orbits, and atmospheres of a large cohort of small planets, including a sample of habitable zone rocky worlds.

An additional data product from the TESS mission is its full frame images (FFIs), which are collected at a cadence of 30 minutes. These FFIs provide precise photometric information for every object within the 2300 square degree instantaneous field of view of the TESS cameras. In total, nearly 100 million objects brighter than magnitude I = +16 will be precisely photometered during TESS’ two-year prime mission.

TESS completed its Southern Ecliptic Hemisphere in July 2019, and is nearing the midway point of its Northern Ecliptic Hemisphere survey. A concurrent, two year-long deep survey by TESS of regions surrounding the North and South Ecliptic Poles will provide prime exoplanet targets for characterization with the James Webb Space Telescope (JWST), as well as other large ground-based and space-based telescopes coming online during the next two decades.

A Guest Investigator program is well underway for TESS, and data download volumes are among the largest of current missions.

The TESS legacy will be a catalog of the nearest and brightest main-sequence stars hosting transiting exoplanets, which should endure as the most favorable targets for detailed future investigations.

TESS received the top science ranking for operating Explorer missions in the just-completed NASA Astrophysics Senior Review, assuring that the mission will be extended through 2022. In principle, TESS’s unique lunar-resonant orbit should facilitate additional extended missions lasting more than a decade.

The status of TESS as it completes its first 1.5 years of survey operations will be reviewed, and information on opportunities for engagement by professional astronomers and amateur members of the public will be discussed as well. 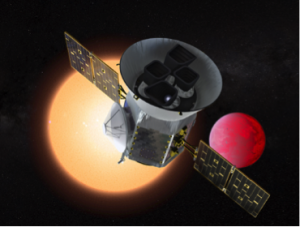 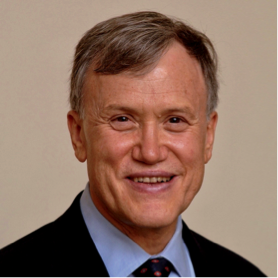 George R. Ricker is the principal investigator for NASA’s Transiting Exoplanet Sky Survey (TESS) Explorer mission, and Senior Research Scientist and Director of the Detector Laboratory at the MIT Kavli Institute for Astrophysics and Space Research.

George’s current astronomical interests include studies of extrasolar planets, and of transient high energy sources and their counterparts. His experimental research interests are focused on the development of new solid-state photon detectors, based on silicon charged-coupled devices (CCDs) and intended primarily for space astronomy applications.

George also has been a pioneer in the development of small, inexpensive satellites for astronomical missions. He served as Principal Investigator for the international High Energy Transient Explorer (HETE-2) mission, a small satellite incorporating instruments from France, Japan and the United States that operated successfully in orbit for six years. Designed, constructed, and integrated at the MIT Kavli Institute, it was the first satellite mission entirely devoted to the study of gamma-ray bursts.

George is an author on more than 300 technical publications.

On November 1, 2019, in the John Wesley Powell Auditorium of the Cosmos Club in Washington, D.C., President Larry Millstein called the 2,415th meeting of the Society to order at 8:00 p.m. He announced the order of business, that the evening’s lecture would be livestreamed on the internet, and welcomed new members to the Society. The minutes of the previous meeting were then read and approved.

President Millstein then introduced the speaker for the evening, George Ricker, TESS Principal Investigator, and Senior Research Scientist and Director of the Detector Laboratory at the MIT Kavli Institute for Astrophysics and Space Research. His lecture was titled, “TESS’s Exoplanets: Results of the Transiting Exoplanet Survey Satellite Mission.”

A transit is the geometric condition in which a satellite or planet passes in front of its host star. By constantly observing a star, scientists can detect transiting objects and infer their size and atmospheric composition.

The primary goal of the Transiting Exoplanet Survey Satellite, known as TESS, is to discover transiting Earths and Super-Earths orbiting bright, dwarf stars within 200 light years of our solar system. The data TESS collects will be used to identify targets for further exploration by the James Webb Space Telescope set to launch in 2021.

Based on models constructed using the Kepler mission’s narrow-view observations, NASA predicts that TESS’s all-sky observations will identify 300 million stars and galaxies during the course of its two-year mission.

Ricker described TESS’s cameras as “exquisite photometers,” acting as 64 million tiny light meters with a precision of approximately 30 ppm, with a 2,3002 degree field of view capable of observing approximately 6% of the sky at a time. He then described the sensors’ technical specifications.

One technical challenge was developing sensors that could observe stars cooler than our sun, which is approximately 5600° Kelvin. Approximately 80% of the stars in our galactic neighborhood are significantly cooler, ranging 3000-3800° Kelvin. To detect those cooler planets, TESS uses four special wide field of view CCD cameras with 105 mm aperture and 24° by 24° field of view.

Ricker described how these cameras were configured to fit into the SpaceX Falcon 9 rocket that, in April 2018, launched TESS into high Earth orbit. He then described the launch process and TESS’s journey to reach final mission orbit, approximately 60 times the radius of the Earth, and the stability of that orbit.

Ricker then showed images from TESS and explained how those images will be montaged together to produce a high resolution composite. TESS has adopted an open data policy and its data is being archived at the Space Telescope Science Institute. At current rates, TESS is set to distribute 10 times as much data as the Kepler and Hubble missions. Scientists around the world have already conducted follow-up observations based on TESS’s data to detect 50 new planets with masses.

TESS is not only exoplanets. Ricker said TESS’s full images could be used to study solar system objects, explosive and variable extragalactic sources, and variable stars. He described how TESS data has been used in the NEOWISE asteroid hunting mission to detect Centaur and trans-Neptunian objects, to detect supernovae light curves, and a tidal disruption event.

TESS has already received a No. 1 raking in NASA’s Senior Review of Explorer Missions which, Ricker said, assures TESS of ongoing support to operate at least four more years.