The 2,418th Meeting of the Society

Venus is Earth’s closest neighbor and is similar in size and overall chemical composition. It sits on the edge of the habitable zone, the zone around a parent star where water could be present on a planet’s surface. However, Venus has gone down a very different evolutionary path from Earth, with a carbon dioxide-dominated greenhouse atmosphere resulting in surface temperatures of ~460°C (~860°F). Surface missions to Venus by the US and the Soviet Union and orbital missions by the USSR, NASA, the European Space Agency, and the Japanese have unveiled a very alien and complicated planet. The atmosphere super-rotates, and produces liquid sulfuric acid droplets that can corrode incoming science probes. The surface is dominated by volcanic landforms and is relatively geologically young. Some workers have interpreted the relatively uniform distribution of impact craters on the surface to indicate that a major volcanic resurfacing of the planet occurred about 750 million years ago, though other data contradicts this hypothesis.

Debate also is ongoing on whether or not Venus had a surface water ocean early in its history. Isotopic data from early probes indicates that the planet has lost an ocean’s worth of water over its history, but no clear signs of water remain on its relatively young surface. Data from future landers can help resolve the debate, as the signature of an early wet Venus should be present in the composition of surface rocks and more detailed isotopic studies of the atmosphere. This theory of an early, wet Venus has led some to suggest that life could have evolved on Venus and perhaps even persist in the stable cloud layers of the atmosphere.

As we search for Earth-like planets around other stars, continued exploration of Venus will help us to understand whether Venus was ever habitable, and thus further inform the likelihood of habitable planets beyond our solar system. Venus also serves as a laboratory for understanding CO2-dominated atmospheres and as a clear warning of the effects of continued anthropogenic carbon dioxide and methane emissions. 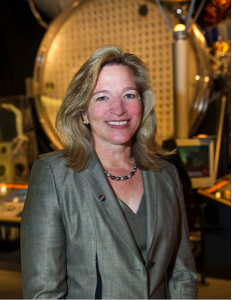 Ellen R. Stofan is the John and Adrienne Mars Director of the Smithsonian National Air and Space Museum, culminating more than 25 years’ experience in space-related organizations and a deep research background in planetary geology. Ellen also is Honorary Professor at University College London. Her research focuses on the geology of Venus, Mars, Saturn’s moon Titan, and Earth. Her favorite mission was Cassini, primarily because of her interest in Titan.

Before becoming NASM Director, Ellen served as NASA chief scientist and as the principal advisor to then Administrator Charles Bolden on NASA’s strategic planning and programs. She helped guide the development of a long-range plan to get humans to Mars, and worked on strategies for NASA to support commercial activity in low Earth orbit as it transitions from the International Space Station (ISS) to sending humans to the Moon and Mars in the mid-2020s. She supported NASA’s overall science programs in heliophysics, Earth science, planetary science, and astrophysics. And she worked with President Obama’s science advisor and the National Science and Technology Council on science policy.

Ellen has published extensively on her research and work and is co-author of the books Planetology: Unlocking the Secrets of the Solar System and Next Earth: What Our World Can Teach Us About Other Planets. She speaks frequently at technical conferences and to the public, and has addressed the World Economic Forum’s Council on the Future of Space Technologies at Davos, the World Science Festival, and SciFest Africa, to name just a few. Among her charitable activities, Ellen served on the board of the College of William & Mary Foundation for 10 years, serving as board chair and co-chair of the development committee as it planned a $1 billion fundraising campaign.

Among many awards and honors, she received the Presidential Early Career Award for Scientists and Engineers and the NASA Distinguished Service Medal, and she was named one of “CNN’s Extraordinary People of 2014.”

Ellen earned her BS at the College of William & Mary and her MS and PhD in geological sciences at Brown University.

On January 24, 2020, in the John Wesley Powell Auditorium of the Cosmos Club in Washington, D.C., President Larry Millstein called the 2,418th meeting of the Society to order at 8:01 p.m. He announced the order of business, that the evening’s lecture would be livestreamed on the internet, and welcomed new members to the Society. The minutes of the previous meeting were then read and approved.

President Millstein then introduced the speaker for the evening, Ellen Stofan, John and Adrienne Mars Director of the Smithsonian National Air & Space Museum. Her lecture was titled, “Venus: Our Hothouse Twin.”

The notion of “habitable zones,” that a planet’s proximity to a star determines the conditions for liquid water and thus the planet’s habitability, has been accepted for decades. But despite Earth’s location in the habitable zone, it has not always been habitable. Further, the currently non-habitable planets of Mars and Venus are in the accepted habitable zone for our solar system. Yet, Titan, far from the “habitable zone,” has open liquid bodies of methane and other liquid hydrocarbons. Habitability is therefore not constant and may not be limited to proximity from a sun.

Comparing volcanoes in our solar system reveals differences in planetary development. Venus is marginally smaller, made of mostly the same materials, and formed near Earth. Yet it currently has a 243-day retrograde rotation, 90 bars of pressure on the surface, no ocean, and a carbon dioxide atmosphere. And while its closer proximity to the sun should only cause its surface temperature to be 10° C greater than Earth, Venus has a surface temperature of 460° C.

The lack of biosphere should make Venus ideal for studying its geology. But the Venusian atmosphere makes surface observation difficult. The only visible wavelength images we have of the planet’s surface are from Soviet Union landers that each perished after approximately an hour after landing.

In the 1990s, NASA’s Magellan mission used radar to coarsely map Venus’s topography. Magellan revealed Venus is covered in volcanoes. Yet, the planet does not have plate-tectonics, illustrated by the lack of any pattern in volcano location. Stofan believes some of the volcanoes are active, but said Magellan lacked time or ability to identify such activity.

Stofan then discussed lava flows on Venus, some of which exceed 100 km in length, which may reveal the rate at which greenhouse gasses were introduced into the atmosphere. These flows and Venusian volcanoes also indicate hotspots, challenging the current geological consensus that hotspots are dependent on the existence of plate-tectonics.

The shapes of Venusian volcanoes are also unusual. Stofan showed many pictures of various volcanoes and highlighted the coronae shape unique to Venus, where they can be thousands of kilometers across and occur in long chains. In some places, scientists estimate the planet’s surface to be as young as one million years old. Together with the relatively few impact craters on Venus, Stofan says the data supports her active volcano hypothesis.

Scientists have identified potential ancient subduction zones on Venus’s surface. Some contend these zones are evidence that Venus formerly had plate-tectonics. But Stofan said the zones may have been caused by an ocean early in Venusian history.

Stofan said two dominant theories have emerged. First, that everything we observe on Venus happened 750 million years ago, and a catastrophic overturn of the planet’s interior caused massive floods of lava. Second, that active volcanoes have slowly developed the planet surface. Both models have footing in the existing data. Further exploration is required to resolve the competing theories.

Temperature: 9° C
Weather: Cloudy
Attendance in the Powell Auditorium: 101
Viewing Through the Live Stream on the PSW Science YouTube Channel: 40