The 2,420th Meeting of the Society 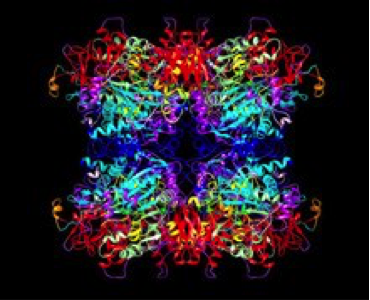 The aim of Structural Biology is to explain life processes in terms of macromolecular interactions in the cell. These interactions typically involve more than two partners, and can run up to dozens. A full description will need to characterize all structures on the atomic level, and the way these structures change in the process. Because of the crowded environment of the cell, such characterization is presently only possible when the group of interacting molecules (often organized into processive “molecular machines”) is isolated and studied in vitro.

While X-ray crystallography has provided structures of a large number of molecular structures, the need for crystals diffracting to high resolution has severely limited the number of supramolecular assemblies and the range of conformers that can be studied with this technique. Single-particle cryo-electron microscopy is about to fill this gap, allowing functional processes to be studied in great detail without imposing restraints on the structures. There are many examples now for this expansion of Structural Biology toward a full characterization of a functional process.

This presentation will cover concept, history and examples of the present capabilities of single-particle cryo-EM, and its significance for medicine. It will then briefly cover the future prospects, which include the study of short-lived intermediates in a non-equilibrium system by time-resolved techniques, and the characterization of continuous structural changes using data mining from large ensembles of molecule images. 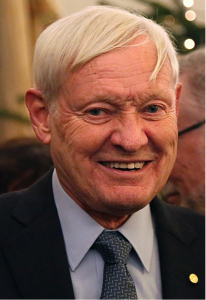 Joachim’s research has been on developing techniques of electron microscopy and single-particle reconstruction of biological macromolecules, specializing in mathematical and computational approaches. His research notably led to the development of single particle cryo-electron microscopy, greatly facilitating atomic resolution determination of molecular structures, leading to a revolution in the study of, in particular, structures of very large biological complexes and their dynamics. He was awarded the 2017 Nobel Prize in Chemistry for this work, together with Richard Henderson and Jacques Dubochet.

Joachim earned his PhD from the Technical University in Munich.

On February 21, 2020, in the John Wesley Powell Auditorium of the Cosmos Club in Washington, D.C., President Larry Millstein called the Presidents’ Lecture and 2,420th meeting of the Society to order at 8:05 p.m. He announced the order of business, that the evening’s lecture would be livestreamed on the internet, and welcomed new members to the Society. The minutes of the previous meeting were then read and approved.

President Millstein then introduced the speaker for the evening, Joachim Frank, Professor of Biochemistry and Molecular Biophysics and of Biological Sciences at Columbia University. Frank was co-recipient of the 2017 Nobel Prize in chemistry. His lecture was titled, “Single-Particle Cryo-Electron Microscopy: Revolutionary Methods for Determining the Structures of Biological Molecules in their Native States.”

To understand how life-functions are constituted in a cell, scientists need to understand how molecules within cells interact. Because those interactions are not readily observable, Frank said scientists must examine subsystems in isolation, and infer how the whole system functions inside a cell.

Frank then summarized what he termed the “ancient history” of x-ray crystallography and electron microscopy (or, EM).

X-ray crystallography exposes crystals to high intensity x-rays. By observing the diffraction pattern, scientists can determine the crystal’s structure. This technique is only useful on highly-ordered crystals, and is further limited due to crystal packing and sample quantities.

EM forms projection images of molecular structures. But because electrons are readily absorbed and damage molecules, samples must be very thin and electrons doses must be low, between 10 and 20 electrons per square Angstrom. The results are “noisy” images.

In 1975, Frank developed the concept of a single particle technique, by which multitudes of identical single particles imaged at the same time to capture their various, random orientations. By taking many such images, the molecule could more quickly be reconstructed in three dimensions. Frank and others subsequently developed a formula called the “detection equation,” by which they determined single particle reconstruction could be applied to molecules embedded in ice.

In 1981, Frank and his colleague used a multivariate statistical analysis to sort images by using computational techniques with quantitative criteria. He credits a program he observed applying such analysis to one-dimensional vectors which coded for blood samples, into which he was able to import his images to produce clustering. Frank explained how he and his collaborators then resolved how to find the angles of reconstruction using random-conical tilt.

Frank subsequently moved his research into cryo-EM, in which a specimen is frozen. Robert Glazer developed the technique with liquid nitrogen. But Glazer’s method produced air bubbles that would allow water crystals to form and damage samples. Frank said Jaques Dubochet decided to use liquid ethane, allowing instantaneous heat transfer that freezes water into vitreous ice and does not damage samples. Frank said this development was revolutionary because it allowed molecules to be embedded in a form close to their natural state. This technique allowed for the first clear ribosome images at moderate resolution.

Other scientists determined that applying maximum likelihood methods of classification could extract several structures at the same time from the same sample. Frank said this development allowed scientists to “fill in the gaps” between structures with biochemistry to “tell the story” of individual molecules.

By 2013, Frank said the single-particle technique had reached the maximum 5.5 Angstrom resolution possible on film. Around that time, the first commercial detectors that could detect single electrons with a large signal-to-noise ratio became available. These detectors made the “resolution revolution” possible, as scientists were able to increase single particle cryo-EM resolution to as much as 1.3 Angstroms. Frank then showed and explained ribosome, AMPA brain receptor, ryanodine receptor, and cystic fibrosis ion channel images he has captured using these modern detectors.

New technologies include time-resolved cryo-EM, which looks at short-lived states of 10 to 1000 milliseconds, which require a microfluidic chip to observe. Although the first devices used silicon, Frank is experimenting with organic polymer.

Lastly, Frank described mapping a multi-dimensional continuum of states by compiling millions of images. Using such a continuum, scientists can infer and confirm the existence of short-lived states.

Frank then answered questions from the audience. One member asked whether scientists could see molecular energy. Frank answered that, while continuous motion was not observable, scientists are able to see GTP and ATP interactions.

Another member asked about the costs of single electron cryo-EM. Frank said the requisite microscope cost approximately $5.5 million and the camera $600,000 which is why there is no strategy for national centers. As a solution, some scientists advocate using lower voltages which may result in equivalent or lower-resolution images.

Temperature: 1° C
Weather: Clear
Attendance in the Powell Auditorium: 96
Viewing Through the Live Stream on the PSW Science YouTube Channel: 28