The 2,449th Meeting of the Society 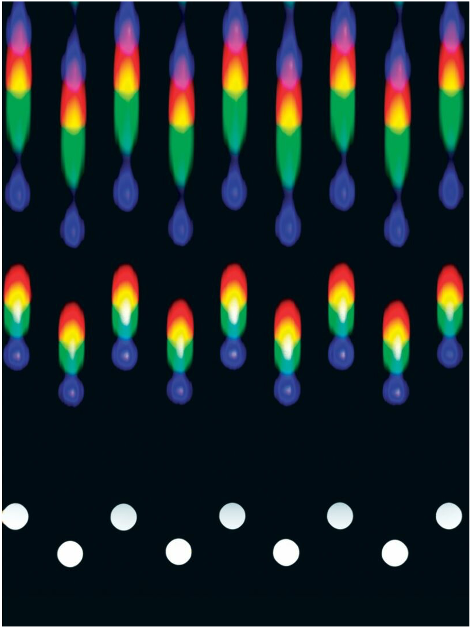 To reach the energies required to explore new regimes of physics, particle accelerators have to be extremely large.  They are extremely complex, costly undertakings that require international support over long periods of time to build and to operate.  The Large Hadron Collider, currently the world’s largest and most powerful accelerator, is 27 kilometers in circumference!  And it required decades of planning, billions of dollars, coordination and cooperation of thousands of scientists, engineers and suppliers, and sustained support from a dozen countries.  While the LHC has been and continues to be a great success, reaching substantially greater energies than it can achieve will be prohibitively difficult and costly with conventional accelerator technology.  And current accelerator technologies are too large, cumbersome and expensive to provide the smaller-scale accelerators for uses in medicine and industry.

A great deal of effort is being devoted to developing more compact, less expensive technologies.  One approach is the dielectric laser accelerator (DLA).  It uses an ultrafast IR laser to deliver energy to electrons inside a microchip-scale device.  The approach has the potential to dramatically shrink particle accelerators, which would enable ultrafast tabletop electron diffraction and microscopy experiments and tunable x-ray sources.  The approach also holds promise for the construction of particle accelerators for the exploration of physics beyond the reach of the LHC and other very large conventional accelerators under consideration.

This lecture will describe an international effort that is now underway to develop a laser-driven accelerator integrated on a silicon photonics platform – “accelerator on a chip”.  It will describe the technology, what has been achieved to date and the prospects for further development in the near term and into the following decades. 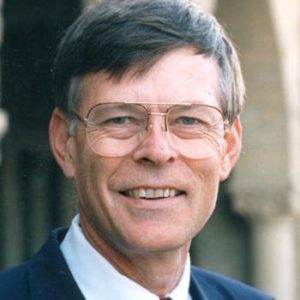 Robert L. Byer is William R. Kenan Professor in the Department of Applied Physics at Stanford University.  He also is a member of the National Ignition Facility.  In a long and distinguished career he has severed in many leadership roles, including, at Stanford, Vice Provost and Dean of Research, Chair of the Department of Applied Physics, Director of the Ginzton Laboratory and Director of the Hansen Experimental Physics Laboratory.  He was a founding member and served as Chair of the California Council on Science and he served on the Air Force Scientific Advisory Board.

Robert’s research focuses on lasers and nonlinear optics.  His current research projects include the development of precision laser measurements to support the detection of gravitational waves and the development of laser accelerators “on a chip”.  He has made many contributions to laser science and technology, including the demonstration of the first tunable visible parametric oscillator, the development of the Q-switched unstable resonator Nd:YAG laser, remote sensing using tunable infrared sources, and precision spectroscopy using Coherent Anti Stokes Raman Scattering.

Robert is an author on more than 551 publications, including over 470 in technical journals, and he speaks frequently at technical conferences.

He earned his BS in Physics at UC-Berkeley, and his MS and PhD in Applied Physics at Stanford University.

On November 19, 2021, from the Powell Auditorium at the Cosmos Club in Washington, D.C., President Larry Millstein called the 2,449th meeting of the Society to order at 8:04 p.m. EDT. He welcomed new members, and the Recording Secretary read the minutes of the previous meeting.

President Millstein then introduced the speaker for the evening, Robert Byer, the Kenan Professor of Applied Physics at Stanford University. His lecture was titled, “Microchip Accelerators: Laser-Driven Particle Accelerator On a Silicon Chip.”

Byer’s collaborative work with Peter Hommelhoff recently received the 2021 Leibinger Laser Prize for innovative technology in Europe. They are working to miniaturize particle accelerators from many kilometers long to centimeters short.

An etched tip of silicon will provide the source of electrons, which are pre-accelerated in a buncher, and then are efficiently accelerated with laser radiation to the requisite speeds. Byer aspires to develop accelerators so small they, for example, could be implanted directly into the body to apply radiation directly to a tumor.

Byer then summarized the historical context for his work. When he arrived at Stanford in 1955, the Stanford Linear Accelerator Center (SLAC) was still under construction. The $100 million project took 10 years to come to fruition, led to multiple Nobel Prizes, and for its first 50 years was the centerpiece of the particle physics community. In 2009, the world’s first coherent x-ray laser opened at SLAC, bringing laser-like radiation into the x-ray spectral range.
Byer then described the history of work on introducing lasers to particle acceleration. His own work began in 1974 and took 30 years to produce its first successful experiment. In 2011, DARPA agreed to fund Byer’s x-ray generation program for five years, with the goal of showing a path to a portable x-ray source for medical applications in the field. He then also set to work on different kinds of accelerators.

The SLAC accelerator typically runs at 30 megavolts/m, and approximately 3 km to reach 10 gigavolts of electron energy. Byer believes he can create an accelerator that does the same in the length of only 1 m.

Using a ti:sapphire laser to test damage thresholds, Byer’s team determined that fused silica and silicon are optimal building materials. They developed a bonded structure through which electrons travel and use a magnet to measure the electron energy. The experiments were challenging because the electrons came in 30 micron bunches, and they needed to travel down a 0.5 micron channel. The team achieved its first success in 2013. Around that time, Peter Hommelhoff achieved success in related research.

Shortly thereafter, DARPA cancelled Byer’s funding. The Moore Foundation filled the void and funded Byer and Hommelhoff as an international collaboration, dubbed the Accelerator on a Chip International Program (ACHIP). Their goal was to demonstrate a shoebox-sized 1 mega electron-volt accelerator and “transverse effects.”

ACHIP started out by seeking to build all accelerator components to be compatible with planar lithographic processing, centered around the fused silica structure previously developed by Edgar Peralta. They began using tungsten tips as their electron source, before ultimately deciding that silicon nano tips were the most efficient. Those tips feed electrons through silicon dual pillar structures, and accelerated by ti:sapphire lasers.

ACHIP is able to focus the lasers by changing their phases to rotate the acceleration gradient and to change the shape of the teeth of the gradient. The team then developed a tree branch structure to feed incoming laser light down to stay synchronous with the electron bunch.

Byer then described inverse design. He was surprised by this method, which allows computers to test a multitude of different designs subject to the same boundary conditions. Byer’s team used this method to design a microchip accelerator on silicon. Rather than rectilinear, the resulting design is an object full of “funny shapes.”

ACHIP is now in its seventh year and had 36 publications last year. They are now working to focus electrons going down the accelerator and to make their currently shoebox-sized accelerator reliable.

The speaker then answered questions from the online viewing audience. After the question and answer period, President Millstein thanked the speaker, made the usual housekeeping announcements, and invited guests to join the Society. President Millstein adjourned the meeting at 9:37 p.m.