The 2,450th Meeting of the Society

Legacy and Ideas for the Future

Director of the Arecibo Observatory

The Arecibo Observatory (AO) hosted the most powerful radar system and the most sensitive radio telescope in the world until the unexpected collapse of the 1000-ft “legacy” AO telescope (LAT) on December 1, 2020.  For 57 years, the facility uniquely excelled in three separate, major scientific areas: planetary science, space and atmospheric sciences, and astronomy.  Through its final day of operation, the LAT continued to produce new, groundbreaking science, adding to its long history of extraordinary achievements, including work resulting in a Nobel Prize in Physics.

The telescope’s collapse left a significant void, which echoed across the extensive, world-wide scientific community in these fields.  It also produced a deeply-felt cultural, socioeconomic, and educational loss for Puerto Ricans, and a tragic deprivation of opportunity, inspiration, and training for STEM students in Puerto Rico – and across the U.S.   Discussions are now underway on a Next Generation Arecibo Observatory Telescope, a new instrument with unparalleled range, resolution sensitivity, and power that would continue the tradition of its predecessor and push forward the boundaries of the planetary, atmospheric, and radio astronomical sciences for decades to come.

This lecture will discuss the observatory’s history and accomplishments, the scientific and cultural reasons for building a new telescope of even greater capabilities, and the technical and engineering plans that have been developed to date.  The prospects for securing the necessary support to move the project off the drawings board and into the sky will also be discussed. 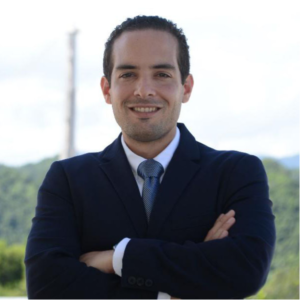 Francisco Córdova is the director of the Arecibo Observatory, which was for many years home to the largest operational single dish radio telescope in the world.   Previously, he served as Senior Manager for Composite Materials and Fabrication for Boeing Research and Technology, leading superstructure composite materials development for military and commercial aircraft across the enterprise.

As Director, Francisco has overall responsibility for the Observatory’s research in astronomy, atmospheric sciences and planetary sciences, for developing the facility’s budget, its research portfolio, for engineering activities and facility operations at the Observatory and for the activities of over 130 scientists, engineers, and staff members.  Francisco is the youngest director ever to lead a Large Facility for the National Science Foundation.  During his time as Director, Francisco has secured major research funding for the facility from private and government agencies.  And he is now deeply involved in planning the observatory’s next stage and securing the support required to realize it.

On December 3, 2021, from the Powell Auditorium at the Cosmos Club in Washington, D.C., President Larry Millstein called the 2,448th meeting of the Society to order at 8:02 p.m. EDT. He welcomed new members, and the Recording Secretary read the minutes of the previous meeting.

The Arecibo Observatory is a multidisciplinary research facility conducting research into radio astronomy, space and atmospheric sciences, and planetary sciences. Built in 1963, the 118 acre facility hosted the largest fully operational single dish radio telescope in the world, upgraded three times over the course of its life. Its original intent was to study Earth’s ionosphere.

At the time of its collapse in 2020, the 900 ton telescope platform was suspended above a 305 m dish by three main towers. Its primary capabilities were its premier radio frequency instrumentation, optical and near-infrared instrumentation, Lidars, and myriad other systems.

On August 10, 2020, one of the auxiliary cables that supports the observatory’s steel platform unexpectedly failed, causing a 100-foot-long gash in the telescope’s reflector dish. The failed cable was the among the newest cables, installed in 1990.

A repair team was assembled immediately after the collapse. They developed a safety and response plan, forensic analysis and monitoring, and repair ideas. At no point did observatory personnel suspect degradation of any of the telescope’s main cables, until November 6, 2020, when one of the main cables failed on the same tower. The failure exposed additional degradation of the main structural elements.

Drones began inspecting the cables three to four times per day until December 1, 2020, when another main cable failed leading to the collapse of the entire platform structure. Córdova showed drone video footage capturing the dramatic collapse.

The damage assessment was total loss of the telescope platform, 35% of the primary reflector, and significant damage to the observatory’s buildings. Capabilities not impacted included: lidars, imagers, the ionospheric heating transmitter, and ISR transmitter elements.

Since the collapse, the observatory has completed necessary demolitions, debris removal, and environmental remediation activities. A forensics analysis of the collapse by Thornton Tomasetti is still underway. Initial analysis indicates the preliminary cause for the failure was creep failure due to potential overload of the structure. In other words, a latent design problem in the telescope’s original design.

The observatory is now working toward historic preservation and planning for the future. The science instruments that were not impacted by the collapse have continued to operate. The observatory has accordingly shifted its ongoing research to rely on those operational instruments.

Córdova said the collapse presents an opportunity to develop a new anchor instrument at the observatory that exceeds the capabilities of the original 305 m telescope. He then presented multiple concepts.

The Next Generation Arecibo Telescope (NGAT) concept is a compact faced array, trying to give the sensitivity of a single dish with the flexibility of simultaneously observing multiple areas of the sky. The NGAT would have 5 MW of continuous power transmitting at 2-6 GHz, 0 to 45 degree sky coverage, and 10 MW peak transmitting power at 430 MHz.

If constructed, the NGAT would lead global planetary defense against errant asteroids, leverage its power to fully map the ionosphere, and pioneer new frontiers in radio astronomy.

The team explored different telescope configurations that would meet the requirements that optimized scientific output, including: single dish, typical array, a hybrid, and an array of dishes on a plate-like structure. The most recent design is a compact phased array of 1,112 9m reflectors equipped with cancellation technology to protect radio frequencies, increasing sky coverage 250% over the collapsed telescope.

Córdova said the biggest concern whether such a large structure could be feasibly built. An alternate concept is to split the compact phased array into seven panels to reduce engineering complications, while minimizing shadowing. This concept would allow the NGAT to be constructed and begin operating in phases. At three panels, the split array would already be more capable than the collapsed telescope.

The observatory is now working to gather support for the estimated $500 million project, and hopes that NGAT construction can begin as early as 2025.

The speaker then answered questions from the online viewing audience. After the question and answer period, President Millstein thanked the speaker, made the usual housekeeping announcements, and invited guests to join the Society. President Millstein adjourned the meeting at 9:42 p.m.