The 2,459th Meeting of the Society

A little over a hundred years after the Wright brothers achieved controlled powered flight on Earth, a team led by NASA’s Jet Propulsion Laboratory succeeded in achieving controlled powered flight on another planet – Mars.  The accomplishment overcame the challenges of the thin atmosphere of Mars (about 1% of Earth), the harsh environment (with high radiation and temperatures plunging down to -130°C), the long distance between the vehicle and the operators (over 150 million miles away), and the rigors of an interplanetary journey.

This lecture will discuss the technical challenges faced in designing a vehicle to fly on Mars, and how they were addressed and, ultimately, overcome.  The lecture will follow the progression from what was to be a  a short-lived technology demonstration to a full-fledged component of a NASA mission to Mars.  And it will discuss the performance of Ingenuity on Mars, its engineering and scientific contributions and its maturation from a test flight platform to a full partner to the Perseverance Mars Rover and its quest for signs of ancient life on the red planet.  The lecture will also touch on the lessons learned from Ingenuity, so far, and how they are informing the design of flying craft now being designed for scientific missions on Mars and other planets. 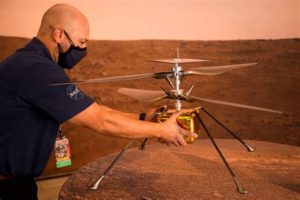 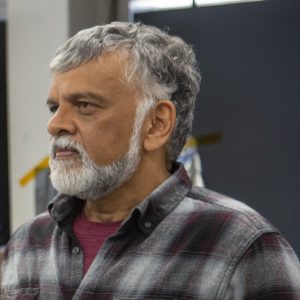 Bob Balaram is a Principal Member of the Staff at the Jet Propulsion Laboratory, California Institute of Technology, where he has been since finishing his doctorate.

His research interests include planetary rotorcraft design and engineering, high-fidelity physics-based modeling & simulation, the application of simulations technology to entry, descent and landing (“EDL”) engineering, methods for verification and validation of space systems

EDL designs,  the design and engineering of rovers, advanced design methods and environments for rover and aerobot navigation, telerobotic systems, and validation of autonomous systems.

Bob is the originator of the concept that became the Ingenuity helicopter on Mars, and he served as the Chief Engineer for Ingenuity throughout its design, development, test and operation phases.   In addition he led a strategic research and technology development project to design and develop future helicopters for future scientific missions on Mars and other planets, building on the success of Ingenuity.

Previously Bob researched precision landing methods for Mars as well as advanced simulation techniques for planetary EDL.  He led the team that developed a high-fidelity EDL simulator that was used by the Curiosity and Perseverance missions.  He is the co-developer of a simulator for planetary rover navigation and control.  He led design teams for developing Mars aerobot (aerial robot) perception systems, a deep-diving Venus balloon gondola concept, and balloon-carried imaging sondes for deployment at Venus.  He also was a co-developer of the Rocky-7 rover platform, a prototype and precursor to the new generation of rovers such as those on the MER mission.

Bob earned a BTech in Mechanical Engineering at the Indian Institute of Technology, and an MS and PhD in Computer and Systems Engineering at Rensselaer Polytechnic Institute.

On May 20, 2022, from the Powell Auditorium at the Cosmos Club in Washington, D.C., President Larry Millstein called the 2,459th meeting of the Society and 91st Joseph Henry Lecture to order at 8:06 p.m. EDT. He welcomed new members, and the director for special projects read the minutes of the previous meeting.

President Millstein then introduced the speaker for the evening, J. (Bob) Balaram, Principal Member of the Staff at the Jet Propulsion Laboratory, California Institute of Technology, and Chief Engineer for the Ingenuity helicopter flown on Mars. His lecture was titled, “Ingenuity: The First Flying Machine on Mars: First Controlled Powered Flight on Another Planet.”

Balaram’s lecture told the story of the Ingenuity helicopter, which landed on Mars along with the Perseverance rover on February 18, 2021. Ingenuity made its first Mars flight two months later, on April 19, 2021, with a piece of fabric from the original Wright Brothers’s flyer on board.

Mars’s thin atmosphere presented the biggest challenge to engineering Ingenuity’s flight. For example, 1 cubic meter of air on Earth’s surface weighs around 1 kilogram, while the same volume of air on Mars weighs between 15 and 18 grams and is equivalent to 100,000 feet above the Earth.

Ingenuity also needed to be both a spacecraft to get to Mars, and an aircraft to fly there. That meant the helicopter needed to survive the significant g-forces and vibrations it would experience in space, without compromising its mechanical functions. It then needed operational autonomy on the surface of Mars, because there-and-back communications with Earth take 20 minutes.

For the trip to Mars, Ingenuity also needed to stay out of the way. Balaram said the helicopter was first conceived as a technology demonstration, and the personnel working on the multi-billion-dollar rover mission initially perceived the helicopter as a distraction.

Balaram walked the audience through Integrity’s technical elements. The helicopter has two sets of airfoils mounted on the same shaft. The airfoils are 1.2 meters from tip to tip and spin in opposite directions at 2400+ rotations per minute. The helicopter weighs a total of 1.8 kilograms and operates around 350 watts. It is powered by a lithium-ion battery pack that is charged daily via solar panel and is capable of supporting 500 watts of power under normal conditions. Balaram described the unique techniques and materials his team used to keep Ingenuity lightweight and energy efficient.

As Ingenuity flies, it takes 30 images of the ground per second to determine its velocity, and runs control loops of its stabilizing sensors 500 times per second. It operates on open source F Prime software to run a smartphone processor, two order of magnitude more powerful than the Perseverance rover’s processor.

Balaram showed videos of Ingenuity’s test flights, and described the technological challenges his team overcame throughout the development process. To mimic Mars conditions, the team constructed a wind tunnel made of 960 computer fans, and tested Ingenuity’s stability in an upside-down orientation.

After several changes over the course of development, Ingenuity traveled to Mars attached to the belly of the Perseverance rover. It was covered by a debris shield to protect it during landing.

Since landing, Ingenuity has benefited from its aggressive thermal design. It has multiple internal radiation baffles, high absorptivity coating for thermal energy harvesting, and CO2 gas-gap insulation. The helicopter was designed to use 60% of its energy budget to running heaters throughout the night to keep the batteries at -20° C.

Now that Ingenuity is beyond its scheduled mission, it has been experiencing Martian winter and going down to -90° C every night. Balaram said that “like Lazarus,” the helicopter wakes up every morning and realizes it’s on Mars.

Balaram showed imagery and videos documenting Ingenuity’s landing and deployment on the Mars surface, equipment testing, and its first flight as captured by the rover. He then described Ingenuity’s subsequent flights and the complimentary science. For example, Ingenuity’s low-altitude surveillance allows for three-dimensional terrain reconstruction to help rover operators decide their best routes for surface exploration.

The speaker then answered questions from the in-person and online viewing audience. One member asked about Ingenuity’s lifespan. Balaram said the helicopter’s metal is the only inherently life-limiting item in the system. After approximately 200 landings, Balaram said the yield capability of the metal could drop.

Another member asked about maximum flight time. The speaker said Ingenuity now flies for almost three-minute stretches, and is limited by the motor’s thermal limits.