The 2,279th Meeting of the Society

The Defense Advanced Research Projects Agency (DARPA) manages high-risk high-payoff research projects for the Department of Defense. Such projects provide dramatic and game-changing advances for our warfighters, thus DARPA has a key role in the the Department’s science and technology system. This lecture will discuss DARPA’s work to prevent strategic surprise and create strategic surprise for our adversaries. 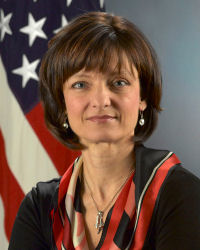 Appointed by Secretary Robert Gates, Dr. Regina E. Dugan has served as Director of DARPA since July 2009. She first served DARPA as a program manager from 1996 to 2000. At that time, she directed a diverse $100 million portfolio of programs including the “Dog’s Nose” program, an effort focused on the development of an advanced, field-portable system for detecting the explosive content of land mines. In 1999, she was named DARPA Program Manager of the Year for her efforts, and in 2000 she was awarded the prestigious Bronze deFleury medal by the Army Engineer Regiment. She is also the recipient of the Office of the Secretary of Defense Award for Exceptional Service.

President Robin Taylor called the 2,279th meeting to order at 8:15 pm on January 21, 2011 in the Powell Auditorium of the Cosmos Club. The temperature was -5 degrees C. and attendance was 120 people in attendance.

Ms. Taylor related the deaths of two members, and announced the new members of the Society. The minutes of the 2,277th meeting were read and approved. President Taylor then introduced the speaker of the evening, Dr. Regina Dugan of The Defense Advanced Research Projects Agency, known more commonly as DARPA. Dr. Dugan spoke on “Breaking Rules, Making Rules.”

The lecture began with videos of spectacular rocket failures, but the American space program culminated in success with the Apollo lunar landing. Excerpts from the movie The Dish described the contribution of an Australian town named Parkes, whose radio antenna linked into the NASA world wide network, and conveyed the familiar message “One small step for man, one giant leap for mankind.”

She discussed the sense of wonder, mystery, and magic of the time, and declared that we need a renaissance of wonder, to renew life’s miracle and magic. DARPA has asked where that sense of wonder came from. She discussed the “cognitive cloud” whose idea emerged from contemplating the logistical nightmare caused by war. She moved to social networking, describing it as a transforming force, where the cognitive power of a billion people can be harnessed.

James Surowiecki’s “The Wisdom of Crowds” formed the basis for an exploration into the decision making ability of a collective group. A crowd can pick a politician, a crowd can pick the weight of a livestock animal.

Scott Page’s theory that “Diversity trumps ability,” relates how to make a difficult problem simpler. Games both simple and complex were described, with one a DARPA experiment called the “Red Balloon Challenge.” MIT won the game, determining the location of 10 balloons released, by using a network of 5,000 people. One subnetwork was organized within a day, and in one hour, using Twitter, this group found 7 of the 10 balloons.

Among the game’s challenges was sorting out true from false reports. False reports outnumbered true ones by 4 to 1. If the same precise location was reported multiple times, it was likely false. Natural noise was used as a filter for truth.

Another game for the masses is Trapster, a speed trap app for the iPhone and other devices, where people report police traps and road hazards, on line and in real time. “Fold It” is a protein folding game, moving the solution of complex biochemistry problems to the masses.

Dr. Dugan discussed the “Iran twitter revolution,” where there were 200,000 tweets in an hour. She also discussed the “Flash Mob,” where viral texting can lead to improv street theatre and mobs both good and bad, a combination of people bullying and running with the bulls. “What will be next,” she asked, and was ready for questions.

One person asked about the positive and negative spins DARPA might have on technology and society. What about the contributions of individuals like Einstein, were they being discounted?

Dr. Dugan replied “one in a crowd advances the crowd.” DARPA’s role is to find new ways of solving problems. There were questions about Linux and whether the crowd was simply wise when asked the right question. Dr. Dugan discussed the “offensive line problem,” that one break in the line leads to trouble.
After the question period, President Taylor presented a plaque to Dr. Dugan, commemorating the occasion. She made the usual housekeeping announcements and announced the next lecture. At 9:30 p.m., the 2,279th meeting of the Society adjourned to the social hour.