The 2,399th Meeting of the Society

Comets and the Origin of Life

The Proposed CAESAR Mission to Return a Comet Sample to Earth

Comets are among the oldest and most interesting objects in the solar system.  Learning about them can tell us a great deal about the origins and formation of the solar system, and perhaps about the origin of life. For example, researchers have speculated that tholin-rich comets may have seeded earth with organic compounds early in its development, stimulating life to begin. The Rosetta mission studied the comet 67P/Churyumov–Gerasimenko at close range for two years.  The trove of information from Rosetta provides a highly detailed basis for designing a sample return mission to this comet.  And the detection of tholins on 67P/Churyumov–Gerasimenko make it an extremely attractive object for further study, with the promise of illuminating how life began. The Comet Astrobiology Exploration Sample Return Mission (CAESAR) is a proposed mission back to 67P/Churyumov–Gerasimenko to sample the comet and bring the samples back to earth.  Currently, it is one of a pair of finalists selected for further concept development in NASA’s New Frontiers Program.  The other is the Dragonfly mission to Titan.  If CAESAR is selected, and things go smoothly, it will launch in 2024 and return samples to Earth in 2038. This lecture will discuss the reasons for visiting 67P/Churyumov–Gerasimenko again and bringing samples of the comet back to earth for detailed study, and the engineering and science mission proposal being developed. 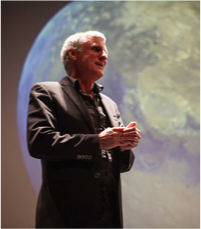 Steven Squyres is James A. Weeks Professor of Physical Sciences at Cornell University.  Before joining the Cornell faculty, he was a postdoctoral associate and research scientist at NASA Ames Research Center. Concurrently, Steve is the Principal Investigator for the Mars Exploration Rover Project, a co-investigator on Mars Express and for the Mars Reconnaissance Orbiter’s High Resolution Imaging Science Experiment, a member of the Gamma-Ray Spectrometer Team for Mars Odyssey, and a member of the Cassini imaging team.  Previously, he was an associate of the Voyager imaging science team, radar investigator on the Venus Magellan mission, member of the Mars Observer gamma-ray spectrometer team, and  co-investigator on the Russian Mars ’96 mission. Steve’s research focuses on the robotic exploration of planetary surfaces, the history of water on Mars, geophysics and tectonics of icy satellites, tectonics of Venus, planetary gamma-ray and x-ray spectroscopy. Research for which he is best known includes study of the history and distribution of water on Mars and of the possible existence and habitability of a liquid water ocean on Europa. Among other awards, Steve is the recipient of the Carl Sagan Memorial Award, the Carl Sagan Medal for Excellence in Communication in Planetary Science, the Mines Medal, the AAU’s Urey Prize and the Franklin Institute’s Franklin Medal in Earth and Environmental Science. He is an author on numerous technical papers, and the book, Roving Mars.  He has appeared often in the media speaking on space and space exploration. Steve earned a BA in Geological Sciences and a PhD in Astronomy from Cornell University, where he worked closely with Carl Sagan.

On November 2, 2018, President Larry Millstein called the 2,399th meeting of the Society to order at 8:04 p.m. in the John Wesley Powell Auditorium of the Cosmos Club in Washington, D.C. He announced the order of business, that the evening’s lecture would be livestreamed on the internet, and welcomed new members to the Society. The minutes of the previous meeting were then read and approved.

President Millstein then introduced the speaker for the evening, Steven Squyres, James A. Weeks Professor of Physical Sciences at Cornell University. His lecture was titled “The Proposed CAESAR Mission to Return a Comet Sample to Earth.”

Recorded history reflects long-standing human fascination with comets. Although comets have a solid nucleus, they are so rich with volatile material that scientists have not been able to identify the remains of any comet that has collided with Earth.

Squyres said comets are planetesimals, preserving what he called the “leftovers” of the early universe. He said comets were the major source of Earth’s early organic chemistry. As such, comets are a source of information for the origins of life.

The New Frontiers Program competitively selects NASA’s planetary missions. There are two finalists for the next New Frontiers selection: the proposed Dragonfly mission to Titan, and the proposed Comet Astrobiology Exploration Sample Return, or “CAESAR,” mission, for which Squyres is the Principal Investigator. New Frontiers is scheduled to choose the winning proposal in 2019.

Returning a sample will be invaluable, Squyres said. Laboratory instruments are orders of magnitude more capable than those that scientists can miniaturize and launch into space. Samples can be reexamined far into the future with more advanced technologies. Moreover, going to a comet in space is the only way for scientists to obtain a sample of a comet’s volatile materials.

CAESAR therefore proposes to take a sample from comet Churyumov-Gerasimenko, the comet nucleus previously visited by the European Space Agency’s Rosetta spacecraft. Because scientists already know what the comet nucleus looks like, Squyres says his team has been able to identify a prime sample site and design instruments around it.

The CAESAR spacecraft will have solar arrays 43 meters from tip to tip, a high gain antenna, and a single suite of cameras. The mission will be powered by solar electric propulsion, which accelerates xenon to produce a gentle thrust that may be powered for years at a time. CAESAR would launch in 2024, arrive at Churyumov-Gerasimenko in 2030, conduct operations until 2032, and arrive back on Earth in 2038.

CAESAR will use “touch and go” or TAG sampling, involving a descent to the comet’s surface, brief contact to obtain a sample, and a quick departure from the nucleus. Squyres described CAESAR’s sampling arm as a “pogo stick,” in which there is a compressible constant force spring to hold in place the sampler mechanism, which Squyres described in detail.

The CAESAR team believes it will be able to return a 200+ gram sample. The team will examine only 25% of that sample, with 75% of it preserved for future investigators.

In the question and answer period, a PSW member asked how many chances CAESAR will have to obtain a sample. Squyres said CAESAR will have enough consumables for three full sampling attempts, with each full attempt preceded by two rehearsal attempts.

Another member asked what unique research benefits Squyres expects from a sample rather than from remote observation. Squyres said, to obtain highly precise measurements of stable isotope ratios.