The 2,315th Meeting of the Society

The Defense Advanced Research Projects Agency (“DARPA”) is the primary “innovation engine” of the Department of Defense. It undertakes, supports and directs high-risk, high return projects with potential for game changing impacts. DARPA supports both basic and applied research, advancing knowledge and developing solutions to practical problems, with the aim of both creating strategic surprise for adversaries and preventing strategic surprise to the US to protect our national security. DARPA currently is pursuing this dual mission by activities in six focus areas: the Adaptive Execution Office, the lead office for the deployment of newly developed technology; the Defense Sciences Office, charged with linking fundamental to applied research; the Information Innovation Office, working on information technologies; the Microsystems Technology Office, focusing on electronics, MEMS, computing, photonics and biotechnology; the Strategic Technology Office, responsible for technologies directed to specific strategic areas, and the Tactical Technology Office, centered on high-risk, high-payoff innovation for rapid, mobile, advanced technologies. DARPA projects have created significant strategic breakthroughs for the nation, and its success has led to many attempts at emulation both internationally and here at home. The Director’s lecture will relate to DARPA and its activities. The specific subject will be announced at the lecture. 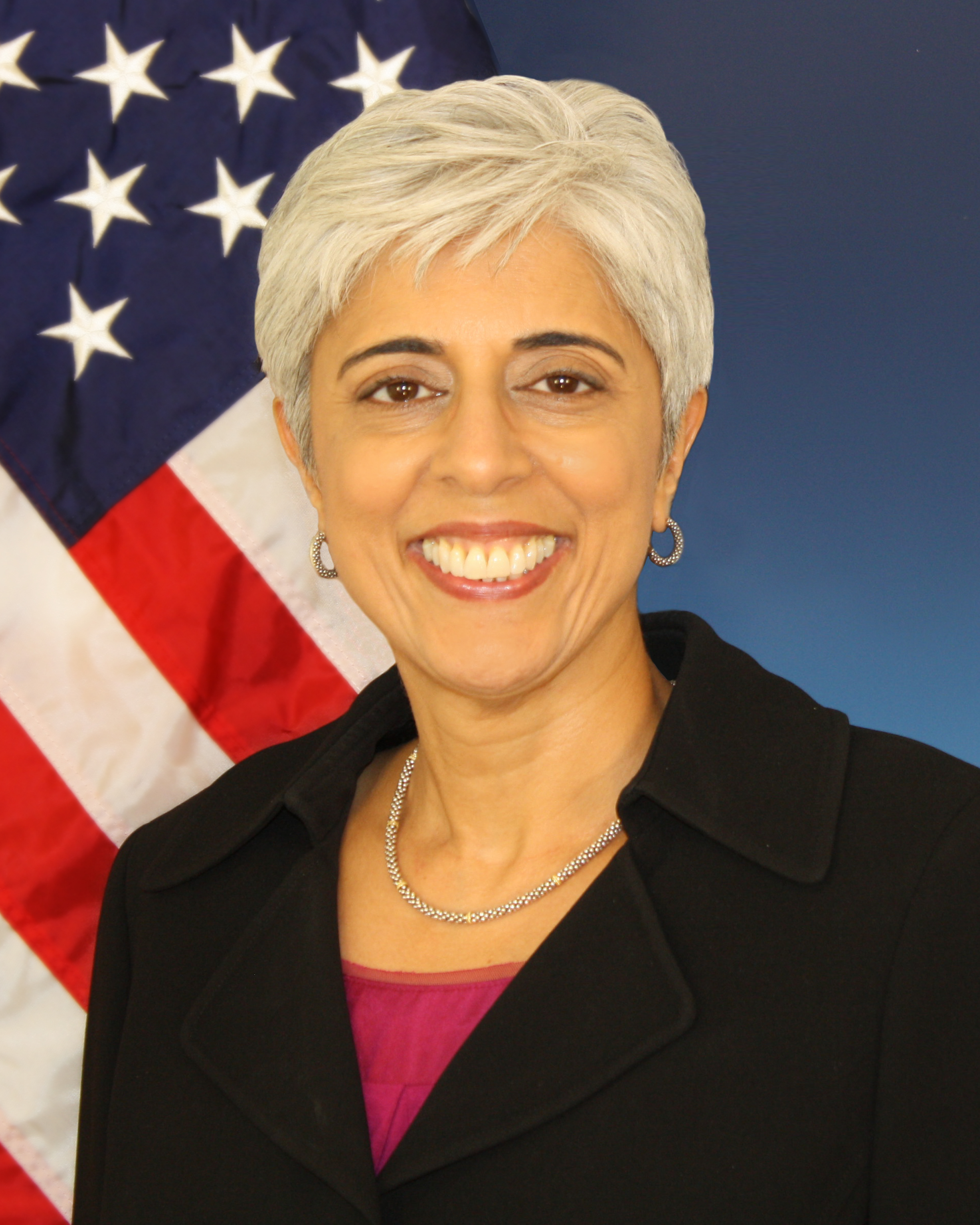 ARATI PRABHAKAR began her career as a Congressional Fellow with the Office of Technology Assessment. She then joined DARPA as a program manager, where she initiated programs in advanced semiconductor technology and flexible manufacturing, and projects to use the technologies in military systems. She was founding director of the DARPA Microelectronics Technology Office where she led a team of program managers developing advanced technologies in semiconductors, flexible manufacturing, optoelectronics, infrared imaging and nanoelectronics. In 1993 she was appointed Director of the National Institute of Standards and Technology. Subsequently, she served as CTO and Sr. Vice President of Raychem, and President of Interval Research. From 2001 to 2011, prior to her appointment to head DARPA in 2011, she was a Principal of U.S. Venture Partners. Dr. Prabhakar earned a BS from Texas Tech University and an MS in Electrical Engineering and a PhD in Applied Physics from the California Institute of Technology. She has served on the National Academies’ Science Technology and Economic Policy Board, the College of Engineering Advisory Board at UC Berkeley, and the red team of DARPA’s Defense Sciences Research Council. She chaired the Efficiency and Renewables Advisory Committee for the DOE. She is a Fellow of the Institute of Electrical and Electronics Engineers, a Texas Tech Distinguished Engineer, and a Caltech Distinguished Alumna.

President John Ingersoll called the 2,315th meeting to order at 8:18pm March 22, 2013 in the Powell Auditorium of the Cosmos Club. Mr. Ingersoll announced the order of business and introduced two new members of the Society, including the speaker of the evening.

The minutes of the 2,314th meeting were read and approved.

Ms. Prabhakar began by explaining that DARPA was created after the launch of Sputnik in 1957, a specific instigating event that caused technological and strategic surprise for the United States. DARPA was intended to prevent that kind of surprise in the future while attempting to create our own. She noted the world today is filled with the technologies and capabilities that DARPA helped created through pivotal early investments. However, many research results required immense investments and effort from private companies and military agencies to bring their capabilities to fruition and use. These technologies can be found across many aspects of military and national security capabilities but also played important roles in the development of our economy and society.

Ms. Prabhakar believes that DARPA's modern role is to make the critical investments today that will lead to a new generation of transformational technology capabilities for our nation's future. It does so despite being a small portion of total defense department research and development budget, making its investments in the highest priority, highest impact, and most potentially disruptive areas. DARPA's mission is to "anticipate, explore, and achieve the concepts and technology on which the Nation's future deterrent and defense capabilities depend." This is translated into action via three broad objectives: Creating breakthrough capabilities for national security, catalyzing a differentiated and highly capable U.S. technology base, and keeping DARPA itself robust and vibrant, she said.

Ms. Prabhakar explained that the U.S. Security landscape was dominated by a monolithic existential threat at the time of DARPA's creation, but that the modern world has brought many new complexities, technological capabilities, and opportunities. Global actors range from nation states to individuals, with access to conventional weapons, weapons of mass destruction, and new tools like cyber threats. However, she stated that DARPA will continue to focus on game-changing military systems concepts, transforming warfighting for the next generation while noting the last generation excelled via layered, multi-technology capabilities. Further, there must be an emphasis on adaptability, she said, knowing that our adversaries will adapt in real-time and therefore we must as well. Additionally, she hopes to challenge the high tech community to use innovation to invert the usual cost equation instead of allowing exquisite technical solutions no matter the cost.

Ms. Prabhakar then discussed several areas of interest aligned with DARPA's mission. The cyber domain has been concerning as cyber defense today could be characterized as a patch-and-pray approach, where attackers are endlessly creative and scalable. DARPA hopes to change this dynamic by creating inherently more secure systems, imagining a future where cybersecurity can be brought under control and managed with some level of assurance. Further, DARPA intends to refine our cyber offensive capabilities to the point they are completely linked to the kinetic aspects of warfighting in the way that electronic warfare already is. She explained that GPS, a DARPA result, has become something upon which we are so reliant that this reliance has become a vulnerability, prompting DARPA to focus on new position, navigation, and timing solutions with very precise, accurate, high-performance capabilities that can be brought to handheld and embedded applications. Additionally, the Phoenix program tackles the immense cost of launching a geosynchronous satellite by creating the capability to cooperatively approach a retired satellite, identify and harvest an asset, and combine with other separate satlets to assemble a new satellite directly in orbit. Ms. Prabhakar explained that DARPA recognized very early that this project would touch on many space policy issues, so this major unclassified program has reached out to engage with space policy actors from around the world.

Ms. Prabhakar explained that there has long been a virtuous cycle between defense needs and commercial opportunities, such as the semiconductor industry and integrated circuit development. When there are commercial opportunities available, entrepreneurs and existing companies bring private capital to build out technology capabilities, she said. Not only does the nation's defense benefit from this research funded by private investments, but robust industries can independently develop that further drive the commercial market. DARPA attempts to be the best user in the world of commercially available technologies, while continuing to catalyze the development of new national technology capabilities. Ms. Prabhakar discussed several projects that exemplify this constructive cycle between DARPA and industry. The Diverse Accessible Heterogeneous Integration project combines the best of globally available silicon technology, intimately coupling and interconnecting specialized components critical for our defense systems. The "Living Foundries" program aims to reduce the time and cost for doing synthetic biology and expand the complexity of what is possible when using cells for custom, distributed, on-demand manufacturing of useful materials. The XDATA program is about building a set of tools and techniques to process and analyze vast and heterogeneous data, building from very promising results after an earlier project was able to discern real patterns out of immense and numerous data sets related to a specific military capability desired for Afghanistan. Finally, the "revolutionizing prosthetics" program aims to create sophisticated prosthetic arms under direct brain control and has already shown promising early success after a volunteer surgically received pea-sized implants on her brain that enable the mental control of a complex robotic arm.

Ms. Prabhakar believes that being on the leading edge of technology development often uncovers new ethical, legal, safety, and policy questions. DARPA has to explore new high-potential technology areas even if they are uncomfortable, she said, but also seeks to engage the broader community to discuss societal questions. Though DARPA works rigorously within existing laws and regulations, it also seeks experts when in uncharted territory, she explained.

Ms. Prabhakar concluded by discussing how DARPA has remained robust and vibrant in over many decades. Since creating large steps in capabilities often requires significant technical risk, and aiming for long term results still requires making management decisions in the here and now, how DARPA how we manage programs and projects is critical to its success. Program managers are often technology leaders, very capable and possessing a wide range of experience across many technologies. Program managers often have a drive to change the world that enables them to work with the community, project a program's vision, rally researchers around seemingly impossible goals, and then deliver results to those moving the research forward. The technical leadership organization within DARPA focuses on hiring and empowering program managers, while managing the portfolio of programs they are responsible for. DARPA also successfully engages with a broad and diverse technology community, including companies, universities, and many government services and agencies. Ms. Prabhakar believes that DARPA will continue to build and reinforce a unique culture that is driven for off-scale impact, taking risks, and recognizing the privilege of working for our country to create a better future.

With that, she closed her talk and Mr. Ingersoll invited questions.

Someone wondered whether there was a possible trend in research and development from smaller organizations to larger ones. Ms. Prabhakar agreed that the nation is often very dependent on major defense contractors but noted that many different entities and individuals feed knowledge and results into that type of organization.

After the question and answer period, Mr. Ingersoll thanked the speaker, made the usual housekeeping announcements, and invited guests to apply for membership. At 9:57pm, President John Ingersoll adjourned the 2,315th meeting to the social hour.