The 2,269th Meeting of the Society

Keeping the Genii Out of the Bottle

NSF’s integrated portfolio of research, education and infrastructure has helped US universities become among the leading research institutions in the world. Combining graduate research and education enables US universities to speed technology transfer through the persons of their MS and PhD graduates who bring the latest skills, innovative mindsets and fresh networks of contacts to their new employers. While integrating research and education has helped put US universities in the first rank globally, the situation is changing. Other countries are adopting this approach of investing in research, education and infrastructure in computation/communications/informatics at their universities. This calls on us to adapt to a new era of leadership in which our future success will depend on several factors, including: our ability to learn to compete through collaboration; our success in tapping into the relevance of research to broaden participation in science and engineering; our focus on fueling transformative research that makes and breaks paradigms, often through the use of large facilities and multidisciplinary teams; and our commitment to ensure that American scientists can work with the best people and the best equipment, wherever they are in the world. 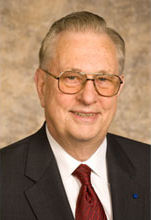 ARDEN L. BEMENT, JR. has served as the Director of the National Science Foundation since 2004. He previously was Director of the National Institute of Standards and Technology (NIST) from 2001 to 2004. Before coming to NIST, he served as the David A. Ross Distinguished Professor of Nuclear Engineering and head of the School of Nuclear Engineering at Purdue University. He also had been director of the Midwest Superconductivity Consortium and the Consortium for the Intelligent Management of the Electrical Power Grid. He had also been on the National Science Board and chaired various groups of the National Research Council. He is a member of the National Academy of Engineering. Before coming to Purdue he had been vice president of technical resources and of science and technology for TRW Inc., Deputy Undersecretary of Defense for Research and Engineering, Director of the DARPA Office of Material Science, and a professor at MIT. He holds an engineer of metallurgy degree from the Colorado School of Mines, a master’s in metallurgical engineering from the University of Idaho, and a doctorate in metallurgical engineering from the University of Michigan.

President Robin Taylor called the 2,269th meeting to order at 8:18 pm April 30, 2010 in the Powell Auditorium of the Cosmos Club. Ms. Taylor introduced one new member of the Society. She announced that the Joseph Henry Lecture would be delivered by Stephen Dick on May 14. She asked members to pay dues and made some housekeeping announcements.

The minutes of the 2,268th meeting were read and approved.

Ms. Taylor then introduced the speaker of the evening, Mr. Arden Bement, who is in this tenth and last year as director of the National Science Foundation. Mr. Bement spoke on “Graduate Research, Education and Infrastructure – Keeping the Genii Out of the Bottle.”

Mr. Bement began by saying that the genius of the American approach to graduate education is the combination of research, education, and infrastructure in one place, research universities. To keep these three genii unbottled, it is essential that we continue to manage our research and development efforts well. The development of researchers is what fuels our continued innovation.

Researchers today need, as they always have, the finest analytical skills and tools. Today these skills and tools are applied in a global setting, and that change in setting is important. Researchers also need interpersonal and communication skills. They need to be able to engage with others on a global stage.

The world has grown smaller. Advancements in science and technology, particularly in aviation, telecommunications, and computer science have been the major reasons for this. Today a global outlook is necessary. NSF puts a premium on programs that integrate research and education and encourage thinking in a global context.

The rate of growth in research in the U.S. is 6%. In Asia, it is 10%; in China, it is 20%. Today the U.S. must be an inclusive player and collaborator. We can no longer act as though we are alone at the top of the heap. We must adapt to a world where leadership is shared. Many lead researchers will become globe-trotting citizens of the world. Top scientists may hold appointments in several locations in the world. The top graduate institutions may have resources and projects in different parts of the world.

Mr. Bement encourages graduate students to expand their interests, to take up languages and studies outside their fields, and generally broaden their outlooks. He recalled the words of Isaac Newton, who said he could “... calculate the motions of heavenly bodies, but not the madness of people.” Mr. Bement also encourages developing social and behavioral skills; they are needed to direct the scientific disciplines. Too few of us are capable of advocacy, he said. Too few have people skills. This is at a time when public funds are vital; governments fund most research, and research transcends traditional boundaries and that requires new skills.

Mr. Bement believes our future success in this new era will depend on several factors. First, as a nation, we need to master the art of competing through collaboration. Second, graduate programs can learn to tap into the relevance of research into national priorities and broaden participation by women and minorities. Third, NSF can focus on fueling transformative research that makes and breaks paradigms, often through the use of large facilities and multidisciplinary teams. Finally, graduate programs and funders such as NSF can continue the commitment to assuring that American graduate students can continue to work with the best people and the best equipment, wherever in the world they are to be found.

The first question was about how much the modern automation techniques had contributed. The questioner recalled the days of hand-drawn illustrations and 35-millimeter slides. Mr. Bement said automation and telecommunications have made a great difference. Virtual networks, instant communications, and the like are making information more open and ubiquitous. Discovering planets is an example; it is now possible for high-school students to discover planets.

One questioner asked if the culture of science today provides less support for honesty. Mr. Bement shared the concern. He mentioned some examples of the problem and spoke of techniques to encourage honesty. He discussed social networks and networking, including games an game theory, as a possible innovation in this. Game technology may be incorporated and teachers may be included. All this may help teach people to include all sides of a problem.

Someone commented on the negative effects of security clearances, which make it easier for people to take credit for other’s contributions. Mr. Bement commiserated, and noted the practice of industrial espionage. He recounted some of his history from his industrial work, and said some of the stories are pretty scary.

There was an extensive discussion about how proposals get written, how they get evaluated, and how these processes have changed. The patterns of interaction and the mechanics of administration in science and engineering, especially innovative, leading science and engineering, were also discussed. Someone advocated considering a patent as the equivalent of a juried paper, and there was discussion of new ways of handling intellectual property that results from government funding. In response to a question about funding the prosecution of patents, Mr. Bement said that is done at present by NSF.

After the talk, Ms. Taylor presented a plaque commemorating the occasion and thanked Mr. Bement on behalf of the Society.

Ms. Taylor made the usual housekeeping announcements and invited guests to apply for membership. Finally, at 9:34 pm, she adjourned the 2,269th meeting to the social hour.